One of the things I’ve noticed lately is that there is a lot of confusion about how governments finance themselves. Many people try to make sense of the state’s finances by extrapolating from their own experiences with household budgets or running businesses. This leads to a lot of misconceptions, the most prominent of which is the idea that whenever governments borrow money, they must be acting irresponsibly. So I’m embarking on a 3-part series that I hope will clear things up for some people.

In general, there are three primary ways that governments can raise money:

None of these methods of raising money is intrinsically immoral or irresponsible. It very much depends on the specific situation the government is in, and it is very dangerous to overgeneralize. Today we’re starting simple and discussing taxation.

Taxation directly takes money from the pockets of citizens and puts it into the hands of the government. It’s important to remember that households and businesses can never do anything remotely similar to taxation–you cannot compel your employer to pay you more, and you cannot compel customers to buy your goods and services. It should also be noted that taxation has serious consequences for morality and justice, but those are beyond the scope of today’s post. Today we are focusing only on how taxation affects the government’s budget and economic performance, not on the ways it affects the distribution of wealth or opportunity.

The economic effects of taxation will depend on two primary factors:

If the economy is doing well, taxation can be a very effective means of controlling inflation. If there is more demand for goods and services than the economy can supply, prices begin to rise. The government can help stop prices from rising uncontrollably by taking money away from consumers. Conversely, if there is too much money available for investment such that this money is being invested recklessly, inflating asset prices and creating bubbles (such as the US housing bubble that started the economic crisis, or the stock bubble of the late 90’s), a tax increase can reduce the amount of money available for investment and make it harder for bubbles to develop.

Oftentimes, when inflation is rising, it is difficult to tell if this is because there is too much consumer spending chasing after too few goods and services or if this is because there is too much investment chasing too little demand. For this reason, governments should be careful to pay attention to whom they are taxing. If you tax consumers when investment is the problem or investment when consumption is the problem, you may reduce the headline inflation rate while simultaneously making the economy less stable. For instance, in the mid-00’s, the economy was seemingly humming along and inflation crept upward in some countries. This would have been a good time for a tax hike on investors to reduce the risk of bubble formation, but it would have been a very bad time for at tax hike on consumers, who were already replacing too much of their wage income with dangerous loans and mortgages.

All of this is easy to see now, but it was much harder to see in real time. Most governments did not increase taxes on investors during this period, which would have both helped to deflate the bubbles and make it easier to deal with the subsequent crisis. Political considerations play a major role here–in democracies, parties are reliant on voters for support, and voters tend to oppose tax increases regardless of the economic circumstances, sometimes even when those tax increases are not likely to affect them personally. This makes it very hard for parties to raise taxes even if they are aware that the economy would benefit from this. It is easy to accuse George Bush or Tony Blair of failing to raise taxes during the 00’s, but we should also remember that the opposition parties in both countries were promising to cut taxes at the time–this goes for both the democrats and for the Tories.

If the economy is doing poorly, everything changes. A tax hike in a weak economy cuts consumption and investment when one or both of these things are already weak. This deepens and prolongs the economic malaise, making it harder for the economy to recover. But it must be remembered that sometimes economies perform poorly because consumption is weak while other times they perform poorly because investment is weak. If consumption is the problem, a tax increase on investors may not be particularly harmful, and if investment is the problem, you may be able to get away with a tax increase on consumers. Right now, the economies of the US and UK are recovering but remain weakened (the US is much further along in its recovery than the UK). Wages remain depressed in both, but their stock markets are performing very well. US wages have barely begun to recover:

But the US stock market looks great:

But the UK stock market looks much better than UK wages (though not as good as the US stock market):

This indicates that in both of these countries, the economy is likely to be constrained by consumption, not investment. So taxation on consumers would be very damaging, while taxation on investors is likely to be less of a problem. The core issue in both countries is that investors have lots of money, but firms are not spending much of it. Consequently, it isn’t trickling down to workers and consumers. One way the government could in theory jumpstart things is by taking excess money that firms are reluctant to spend and giving it directly to consumers (or indirectly through spending programs). The danger is that firms would react to a tax increase by becoming even less willing to spend, saving even more money. Corporate profits are very high these days because firms remain very fearful of future economic instability–they are loathe to increase costs, and this means they are loathe to increase wages to fuel consumption. In the US, corporate profits have never been higher as a percentage of GDP than they are now: 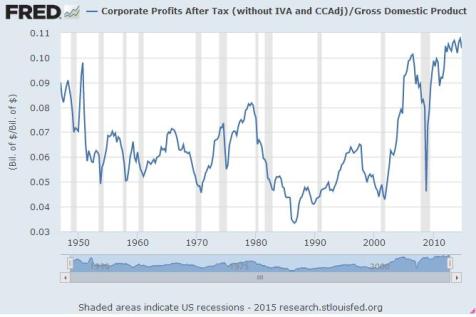 The UK is not as impressive, but its corporate profitability rate is at its highest level since the late 90’s:

Yet companies remain reluctant to spend, and a tax increase on them would not help change their mindset. How can the state get money from people without reducing consumption or investment? This is where borrowing and printing come in. We’ll talk about each of those later this week. Once those are out, I will include links to them at the bottom of this post. They’ll also be shared through my Facebook page and Twitter account, and the various other mechanisms by which regular readers follow this blog.

5 Comments to “The 3 Ways Governments Raise Money Part I: Taxation”