Today I’m continuing my three-part series on how governments finance themselves. The aim is to clear up the popular misconception that the state’s budget is similar to that of a corporation or a household, that government borrowing is always necessarily a bad thing. Previously we talked about taxation–today is all about borrowing.

To refresh, there are three dominant ways that states raise money:

None of these methods of raising money is intrinsically immoral or irresponsible. It very much depends on the specific situation the government is in, and it is very dangerous to overgeneralize. There are a couple others ways to raise money that I won’t be covering, because they are not very common in the US or the UK today. These include collecting profits from state-run enterprises and seizing funds from other countries through conquest.

At the end of the taxation post, we left the government in a sticky situation–how should it raise money when the economy is depressed, such that any money it seizes through taxation will further depress consumption or investment? One great way to deal with this problem is borrowing. If the government gives consumers or investors bonds in exchange for their money, the money they hand the government becomes an investment that pays them a return.

The government wants to take Bob’s savings and use them to get the economy moving. If it increases Bob’s taxes, collecting $150,000 in taxes, Bob is likely to panic about his own financial future. Bob feels he needs those savings to retire, and Bob is likely to attempt to reduce his spending to try to keep his retirement nest egg growing. Instead of allowing his savings to drop to $50,000, Bob cuts his spending to cushion the blow. So now Bob makes $300,000, spends $75,000, pays $150,000 in taxes, and saves $75,000. On top of this, Bob is now very angry at the government and plans to vote against it in the next election. The government has raised a little bit of money, but at a high price–it has had to lower consumption to do it and it has had to tick off voters like Bob.

If the government borrows the money instead, everything works out very differently. Bob knows the economy is depressed and he’s very worried about it. Bob would like a safe place to put his money where he knows it will see a return. By offering to borrow Bob’s savings and issues Bob bonds, the government makes Bob feel more secure, rather than less secure. Because Bob’s money has been exchanged for an asset rather than simply seized, Bob does not feel the need to reduce spending. Consequently, Bob ends up making $300,000, spending $100,000, paying $100,000 in taxes, and owning $100,000 in government bonds. The government can take that $100,000 and use it to create a couple middle class jobs for Bill and Stacy. Bill and Stacy will make less money than Bob does, so they will pay a lower tax rate and save less of what they make, spending more of this money and injecting more of it back into the economy than Bob was able to do by investing it in stocks. Importantly, this makes everyone happy and more likely to re-elect the government. Bob is happy because he has bonds, while Bill and Stacy are happy because they have jobs.

But this gets played up far too much by the media. The government is not a household or a business, its revenues do not have to match its expenditures. There are a number of ways that governments can handle their debts without raising taxes that are not readily understood by the public:

Let’s say a few words about each of these.

If the economy grows at an annual rate of 4% per year but the government runs a deficit of only 2% of GDP, the economy will grow faster than the debt will, shrinking the relative size of the debt even though the total debt continues to rise. Consider the United States during the 1960’s, when it continually ran small deficits:

Despite these deficits, the US actually increased spending during this period, creating new government programs under President Lyndon Johnson’s “Great Society” plan:

We can see spending increase from around 23% of GDP in 1960 to around 28% by 1970. With the government continuing to run deficits and continuing to increase spending anyway, we might expect to see growing debts but the opposite happened–the debt burden shrank:

This is because the government used this increased spending to make constructive investments, producing a great decade for growth rates:

With growth rates often exceeding 4% and the deficit rarely surpassing 3%, the government was able to continually borrow while shrinking the relative size of its debt burden.

Another way to run down the debt is inflation. With inflation, the government slowly chips away at the value of debt in real terms. Consider the United States during the 1970’s. In the 70’s, the United States ran larger deficits:

Due to a couple of oil shocks, growth was more anemic, struggling to stay above 4% consistently:

But the debt burden still fell during this period:

How? While the oil crises damaged growth, they also sent inflation soaring:

This cushioned the blow of lower growth rates on the government budget, shrinking the real value of the debt.

It’s often forgotten that the government has many special powers that businesses and households don’t have. For instance, if you owe a lot of money to someone, you can’t just decide to drastically increase your salary while holding the size of your debt constant. Your salary is not something you control. But the government can do this after a fashion by changing the value of its currency.

Investors recognized that the UK economy would benefit from a devaluation. Led by George Soros, they began shorting the pound, eventually persuading the government to ditch ERM completely in 1992. Consequently, inflation was high in the early 90’s, sharply reducing the value of the pound:

Once Britain ditched ERM completely in 1992, the devaluation ended and inflation rates came back down. The weaker currency boosted exports back up to 27% by 1995, contributing to reasonably solid UK growth in the mid to late 90’s:

And during the devaluation, the relative size of the debt was swiftly cut:

So we should not get stuck thinking that the only way for the government to tackle its debt is for it to cut spending or raise taxes. It has a lot of other tools that households and businesses do not have.

Before we sign off, there’s one more aspect of borrowing I’d like to talk about–the difference between borrowing from one’s own citizens and borrowing from foreigners. So far, we’ve talked about the difference between borrowing money from Bob and taxing Bob. In both of these cases, Bob is a citizen. But another way for the government to acquire funds without diminishing Bob’s consumption or investment is for the government to leave Bob’s money alone and instead borrow from Han, a Chinese investor. Borrowing from Han brings foreign investment into the economy that can boost consumption and/or investment in the short-term, but because Han must be repaid, it may require the government to send more money back out of the country later. This is not a big deal if the government effectively invests the money it receives from Han, producing larger growth rates that diminish the debt burden’s relative size, and it is also possible for the government to screw Han over by reducing the real size of what Han is owed via inflation or devaluation. In extreme circumstances, governments can even default on their foreign investors, simply refusing to repay them. Investors don’t have military forces and can’t extract what is owed to them (though they can refuse to lend the government money in the future). In practice, defaults often work out better than you might think. Argentina defaulted in 2002, and its economic growth rates improved considerably thereafter:

A lot of people are deeply worried about foreign borrowing because it seems dangerous–if Han stops lending, the government could theoretically find itself in a big hole, potentially resulting in massive domestic borrowing, tax increases, spending cuts, or a devaluation. But there are a couple things wrong with this narrative:

For instance, no one foreign country owns more than 8.2% of US debt, and over 60% is owned by US citizens and institutions: 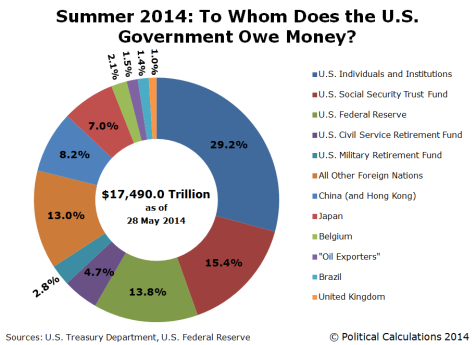 This means that no one country likely exerts enough pull to create serious trouble for the United States. And even if China had the power to seriously harm the US by halting its bond-buying, it is unlikely to do so because China needs a strong US economy for trade reasons. The Chinese domestic market is weak, and China depends on US consumers to buy its goods. The US consumes more Chinese imports than any other country, almost more than the entire European Union combined. As long as China remains dependent on the US market, it cannot take any actions that could seriously compromise the stability and prosperity of that market.

That’s all for today. Check out Part III here.

I’ll be on a trip through May 26, so there will be much less blogging than usual over the next 10 days. I might have a few spare moments and do a post or two, but I might not even do that much. I certainly won’t be handling comments during that period. When I return, I expect blogging to pick up–I have a backlog of blog post ideas that have not yet materialized because I have spent too much time responding to comments from the viral UK post. Going forward, I may significantly reduce the frequency with which I respond to comments so that I have more energy for original work. If I do not do so now, I will certainly have to do so this autumn when I start my PhD.