After a great deal of prodding from both centrist and lefty critics, Elizabeth Warren finally put out her Medicare-For-All plan. The problem is that the plan is both unrealistic on its own terms and openly pretend. Let me show you how. 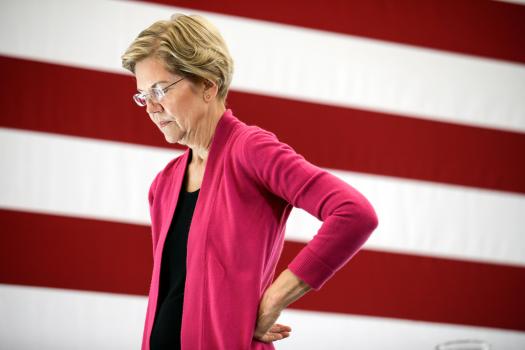 Before I dig into the actual proposal, I want to highlight this line from page 2:

We must fix this system. And over the long-term, the best way to achieve that goal is to move from the system we have now to a system of Medicare for All.

See that phrase “long-term”? That’s code to rich people for “this is all pretend”. Most presidential candidates will tell you that they’re going to do stuff “in the first one-hundred days” or even on their “very first day”. When wannabe presidents tell you they’re going to do something right away, it usually doesn’t happen, but at least you have some reason to think they might try. Warren put “long-term” in this plan to send an unequivocal message to the rich and the powerful that she isn’t serious about this and doesn’t care.

She uses the phrase over and over. On the very next page, in case you missed it the first time, she repeats it:

I’m filling in the details and releasing a plan that describes how I would implement the long-term policy prescriptions of the Medicare for All Act and how to pay for it.

Every candidate who opposes my long-term goal of Medicare for All should explain why the “choice” of private insurance plans is more important than being able to choose the doctor that’s best for you without worrying about whether they are in-network or not.

And then she uses it twice more on page 5:

And in case you forget, it’s there again one more time on page 19:

And the American people know that in the long-term, a simple system that covers everybody, provides the care they need when they need it, puts $11 trillion back in their pockets and uses all of the public’s leverage to keep costs as low as possible is the best option for their family budgets and for the health of their loved ones.

Harry Reid, who encouraged Warren to run for senate and helped jump start her career, is on the record doubting her commitment to the proposal:

Harry Reid tells David Axelrod that he doesn’t think Elizabeth Warren will follow through on ‘Medicare for All.’

“Give her some time, I think that she’s not in love with that, I think that she, you’ll wait and see how that all turns out… oh I know she’s pragmatic, just wait” pic.twitter.com/DHUxeQxYMD

If Elizabeth Warren really wanted people to believe she was committed to Medicare-For-All, she’d at least do us the courtesy of pretending she’d try to do it right away. “Long-term” shows she’s not even serious enough to lie properly.

This isn’t the first time Warren has used code words to conceal her intentions. Back in March, Warren said:

When we talk about Medicare for All, there are a lot of different pathways…Some folks are talking about “Let’s start lowering the age. Maybe bring it down to 60, 55, 50″…Some people say “Do it the other way. Let’s bring it up, from, uh, everybody under 30 gets covered by Medicare.” Others say “Let employers be able to buy into the Medicare plans.” Others say “Let’s let employees buy into the Medicare plans.” For me, what’s key is we get everybody at the table on this…I’ve also co-sponsored other bills including expanding Medicaid as another approach that we use.

This “pathways” or “many paths” language was a way of appearing to support Medicare-For-All without committing to the actual proposal put forward by Bernie Sanders. As Warren goes onto illustrate, “many paths” meant everything from “buying into” Medicare, which is Pete Buttigieg’s public option, to gradually lowering the Medicare eligibility age. But you know the one thing she didn’t list? Bernie’s bill.

Right now, what we’ve got in Medicare for All is a framework. It doesn’t have the details and you’re right to be asking. But the most important part of your asking is to raise awareness so we get this right as we go through it.

By calling Medicare-For-All a “framework”, Warren insinuates that it has no specific content and could mean whatever you want it to mean.

At the time Warren was acting as if Medicare-For-All were a mere slogan, Bernie Sanders quite literally had a website up which enables you to calculate your savings under his bill. This website has been up since 2016. It’s still up. You can still go there. Please do:

At every stage, Warren has been careful to signal that for her, Medicare-For-All means whatever you want it to mean. Now, by telling us it’s a “long-term” goal, she’s signalling it means nothing at all. And because she’s doing it right in front of our faces in a policy plan, most people can’t see it.

The thing to realise about Warren is that the policy plans are not real plans—they’re campaign devices. A Warren “plan” is no different from an issues section of a candidate’s website. Candidates use issues sections to play games all the time. Andrew Yang loves to use his issues section to feign support for Medicare-For-All. Initially, in April, Yang’s website said:

Either through expanding Medicare to all, or through creating a new healthcare system, we must move in the direction of a public option.

In suggesting that Medicare-For-All was merely a move “in the direction” of nothing more than a public option, Yang said loudly what most of the Democratic candidates have been saying quietly. It was too obvious. By August, he swapped it out for a framework-version of Medicare-For-All, with no details:

Through a Medicare for All system, we can ensure that all Americans receive the healthcare they deserve. Not only will this raise the quality of life for all Americans, but, by increasing access to preventive care, it will also bring overall healthcare costs down.

Before too long, I’m sure Yang will be telling us his “long-term strategy” for Medicare-For-All, and I’m sure his supporters will be expecting us to take it very, very seriously.

There are stages here:

Andrew Yang does it on his issues page. Elizabeth Warren does it behind the thin veneer of a policy “plan”. It’s pretend.