Britain: For the Love of God, Please Stop Boris Johnson

On 12 December, Britain has a general election. I care deeply about British politics–I did my BA over there and am finishing up a PhD there as we speak. But more importantly, the Conservative Party has managed the country’s economy and future with stunning fecklessness, and I couldn’t live with myself if I didn’t do my part to point this out.

Let me tell you the story of what happened in Britain and how Cameron, May, and Johnson are making everything much, much worse.

So in 2010, the British elected a coalition government led by the Conservative Party’s David Cameron. Cameron immediately began doing austerity–he cut government spending in an effort to reduce the debt. The trouble is that when government spending is reduced, this cuts the legs out from under economic demand. Cameron cut benefits, pushed down wage growth, and put less money into consumers’ pockets. Here we can see the composition of UK economic growth during the Labour government as compared with that of the Conservatives:

The International Monetary Fund (IMF) subsequently came out with a paper stating that the multiplier (the effect of government spending on economic growth) had been massively underestimated. Then it got worse–the IMF revealed that because the multiplier is so large, austerity shrinks the economy enough to cancel out debt relief. Let me be clear–austerity reduces growth so much that it undercuts government revenue and prevents governments from shrinking their deficits. I wrote about this at the time. It was and remains shockingly clear evidence that austerity was and is failing even to reduce debt and deficits. By the end of the coalition in 2015, UK was in a significantly worse fiscal position than it was in 2010:

The UK performed worse than France, a country that the Wall Street Journal accused of “descending into ridiculousness”. In the first two years, the coalition government put up numbers that were worse than Spain’s. Spain is a basket case–even today, Spain has an unemployment rate over 13%. Had it maintained the trajectory it was on from 2009-2010, Britain could have been doing as well as Germany in 2012.

I wrote about all of this in 2015, and begged Britain to stop David Cameron. But nobody listened. For years, the Liberal Democrats helped the Conservatives do this, until at last Cameron was able to do it without them.

For years, inflation-adjusted wages fell. It didn’t stop until late 2014:

A refugee crisis started in Europe.

Many British workers didn’t want to help. They feared their already low wages would fall further. Cameron had promised his backbenches a Brexit referendum. The far right used the economic anxiety generated by austerity to stoke the fires of racism and xenophobia. Poor and working people were told that voting for Leave would enable them to reverse the effects of austerity and secure more funds for public services. Meanwhile, the Conservative Party’s right wing began planning a free trade agreement with the United States. America has much weaker labour laws. It has lower taxes and weaker regulations. The Conservative Party claims it wants to stop austerity, but if Britain does this trade agreement, it will be forced to harmonise its economic policy with my home country’s just to stay competitive. It won’t be possible to raise enough revenue to support robust public services or maintain living standards for working folks. Instead of saving the NHS, they will starve it, even as Britain’s population ages. This what they have been doing, and they will go on doing it:

It’s not just healthcare. The Conservatives raised university tuition fees to £9,250 per year (roughly $12,154 by today’s conversion rates). This means that a British university student must now pay more to go to university than an in-state American student. Indiana residents pay only $10,948 in tuition to go to Indiana University. Before 1998, British students went to university for free. The fees aren’t helping students get better educations. Over the last decade, I’ve witnessed this government attempt to gut pensions for academics and push their real wages down by 10%. They promised to use fees to help our universities improve the quality of their education and research, but the money is used to build luxury student accommodation only the rich can afford. Academics go on strike after strike, as the Conservatives slowly crush the life out of the university system. Year after year, public spending as a percentage of GDP continues to fall:

Only the Labour Party understands the central role austerity has played in debasing British politics over the last decade. Among other things, they promise:

The numbers might sound big, but Labour’s plan would just get the UK back to ordinary European levels:

Interest rates are incredibly low, and that means Britain can make big investments at very low cost. The fiscal situation just keeps getting better and better for Labour: 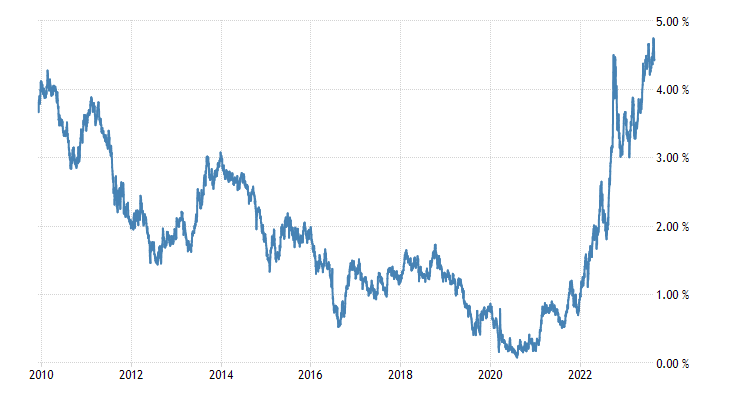 Britain is stuck in a vicious cycle. Austerity creates anxiety and precarity. The Conservative Party channels this anxiety into fear of foreigners–of Europeans, of refugees. This fear pushes voters to vote Conservative, to vote for Brexit. If we let them get away with it, they will use this election and that referendum to make trade agreements that will lock Britain into even more austerity. More anxiety means more fear. More fear means more racism. More racism means more electoral victories for the right. More wins for the right means more austerity. It will go on and on and on and on.

Stop it. Break the cycle. Get rid of these people. Vote Labour.