Andrew Yang is Playing Hide and Seek With the Left Press

When a politician is caught out for taking the wrong position or constructing their proposals poorly, they often try to cover their tracks. If they change what’s on their website or in their policy white paper and remove all traces of the previous language, most voters will never know they’ve flip-flopped. Andrew Yang does this in an especially flagrant way. It’s a game of hide and seek. Let me give you two examples.

Back in April, Yang’s website described his healthcare plan this way:

"Either through expanding Medicare to all, or through creating a new healthcare system, we must move in the direction of a public option"

^That's not M4A, that's the public option in a cheap suit

This language in no way commits Yang to Medicare-For-All. It doesn’t even use the slogan. The “new healthcare system” is never described in any detail. Oddly, the expansion of “Medicare to all” is positioned as just one of many paths to a “public option”. This frames the  public option as the goal! When Elizabeth Warren and Kamala Harris claim there are “many paths” to Medicare-For-All, they at least claim that the public option is a means to M4A. Yang somehow managed to swap these things around. It’s an utter word salad.

When we pointed this out, Yang began covering his tracks. If you go to the website on August 14th, here’s what you find:

Through a Medicare for All system, we can ensure that all Americans receive the healthcare they deserve. Not only will this raise the quality of life for all Americans, but, by increasing access to preventive care, it will also bring overall healthcare costs down.

Of course, Yang never offers any detail on how his version of Medicare-For-All is meant to work. He doesn’t specifically endorse the Sanders bill, or any of the other pieces of healthcare legislation that have circulated through congress. When it’s time to discuss the details, he goes on a long tangent about the virtues of the Cleveland Clinic:

With a shift to a Medicare for All system, costs can also be controlled directly by setting prices provided for medical services. The best approach is highlighted by the top-ranked Cleveland Clinic. There, doctors are paid a flat salary instead of by a price-for-service model. This shift has led to a hospital where costs are visible and under control. Redundant tests are at a minimum, and physician turnover is much lower than at comparable hospitals.

It’s not as if the Cleveland Clinic grants all its patients access to Medicare. Its patients pay for their services the same way patients throughout the United States pay for services–mainly through private insurance. The Cleveland Clinic secured $8.4 billion in patient “revenue” in 2017 alone. The only connection between the Cleveland Clinic and Yang’s Medicare-For-All proposal is that Yang wants the United States to transition to a fee-for-service model. Who is paying those fees for those services? If it’s the government, how does Yang intend to pay for that? There’s no detail on any of this, no numbers of any kind. Yang’s healthcare policy now consists of using the slogan “Medicare-For-All” and then going on a series of tangents about price-for-service models and holistic approaches. It’s a great big distraction from the reality that Yang knows so little about healthcare he believed as recently as April that Medicare-to-all is a means of moving “in the direction of a public option.” Bernie Sanders has a website where you can calculate how his Medicare bill personally affects you, accounting for all the moving parts. Maybe he should start a line of “MATH” hats. 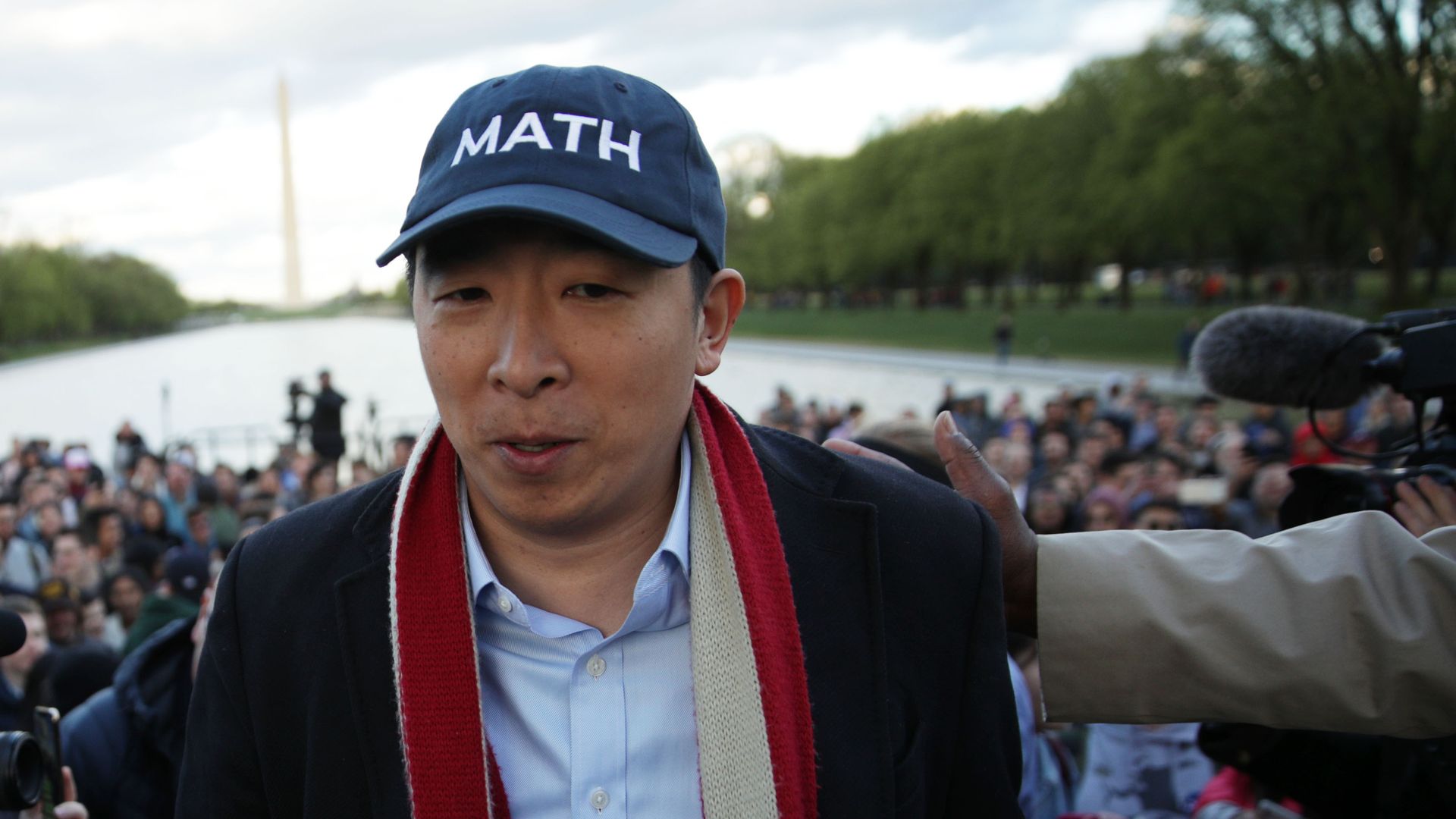 That’s just one example. Let me give you another. In July, Current Affairs‘ Nathan Robinson pointed out that Yang was proposing to pay for his universal basic income (UBI) by making cuts to welfare programs, including Social Security. He wrote:

Then there’s the “old people” question: In some places, Yang says that every American “over 18” would get the $12,000, while other places he says it’s Americans from “18-64.” Presumably, that means Social Security beneficiaries wouldn’t get it, but there again: They still have to pay the new tax. So anyone on Social Security or disability (or whose food stamps, Section 8 vouchers, TANF, or anything else which adds up to more than $1,000) is going to see exactly one change under the Yang plan: a new 10% tax on everything they purchase, while a wealthy miser with a giant income and little spending will get $1000 a month extra.

In April, on the Yang subreddit, “gregfriend28” did “calculations” for Yang’s UBI. His numbers were upvoted by 99% of the “Yang Gang”. They include cuts to Social Security:

At the top, gregfriend28 acknowledges that there was a previous version of the math which excluded people over 64 from the Freedom Dividend completely, making them pay the tax without extending any benefits at all–even worse than what Robinson describes. Then, underneath “Freedom Dividend funding”, gregfriend28 lists $534 billion in “Welfare overlap” and $897.8 billion in “Rest of social security overlap”. That means Yang would be getting more than $1.4 trillion from cuts to Social Security, disability, and other welfare benefits. This is roughly half the cost of the program.

In March, Yang’s website made this all very plain:

Andrew proposes funding UBI by consolidating some welfare programs and implementing a Value-Added Tax (VAT) of 10%. Current welfare and social program beneficiaries would be given a choice between their current benefits or $1,000 cash unconditionally – most would prefer cash with no restriction.

But Yang responded to Robinson’s piece by, again, attempting to cover his tracks. The language about “consolidating some welfare programs” has been eliminated. If you look at the website on August 14th, Yang claims that his UBI would supplement Social Security:

Those who served our country and are facing a disability because of it will continue to receive their benefits on top of the Freedom Dividend. Social Security retirement benefits stack with the Freedom Dividend. Since it is a benefit that people pay into throughout their lives, that money is properly viewed as belonging to them, and they shouldn’t need to choose.

Social Security cuts account for $897.8 billion of the cost of Yang’s proposal at minimum. We spend $180 billion every year on veterans’ disability benefits. This easily exceeds a trillion dollars in lost revenue. Yet elsewhere, the Yang website still claims that cuts to welfare programs will provide a large portion of the funding:

We currently spend between $500 and $600 billion a year on welfare programs, food stamps, disability and the like. This reduces the cost of the Freedom Dividend because people already receiving benefits would have a choice but would be ineligible to receive the full $1,000 in addition to current benefits.

If we take this at face value, $600 billion is much less than $1.4 trillion. It leaves $800 billion unaccounted for. But if gregfriend28’s numbers are right, Yang’s must be wrong. Social Security and VA disability cost too much for Yang to save even $400 billion–let alone 500+. If he really wants his UBI to supplement these programs, he needs to go get another trillion dollars in funding.

Why is Yang playing these games? There are really only two explanations:

Either way, he doesn’t sound like a very good president. He’s incapable, dishonest, or some combination of the two.

If you try to argue with the members of the “Yang Gang” about this online, they will hide behind the revisions. Of course he supports Medicare-For-All! The website says so. Of course the UBI will supplement Social Security and VA benefits! The website says so. If you tell them that the website’s changed, they’ll claim that Yang is new to politics, that he’s “learning”, that we should “trust him”. The premise of their arguments is that Yang is a good guy.

Is he? In January, Yang went to “LibCon”, an event for libertarians:

He wasn’t the only person at LibCon that year. There was also:

He confused Medicare-For-All with the public option. He proposed cuts to social programs and covered his tracks when subjected to scrutiny. He cavorts with right-wing libertarians. Why on earth should anybody trust this guy? The Yang Gang is a personality cult. It’s not based on math, it’s based on faith in a smooth-talking savior from Silicon Valley.