The other day I ran across a survey–apparently 40% of British people feel that “having a wide variety of backgrounds has undermined British culture”. When people say that western culture has been undermined, they are implicitly saying that at one point in time western culture was better. Many socialists, liberals, and progressives don’t agree with that–they think traditional values are wrong and moving past them is good. But today, instead of relitigating social issue debates about changing values, I want to make a case to our socially conservative friends on their own terms. To be clear, this doesn’t mean I agree with traditional values. I merely want to show that the values social conservatives treasure are not threatened by migrants–they are instead threatened by the very markets many on the right so deeply prize.

In the post-war period–the 50s and 60s, when ordinary people in western countries received large wage increases and saw their living standards skyrocket–they were largely insulated from the consequences of markets. In the halcyon days when we all knew that the man on television with the deep voice could be trusted implicitly, there were large trade barriers between countries. States didn’t have to worry much about competing with each other to attract business, because for the most part business was immobile. German firms were German, British firms were British, American firms were American. When different countries don’t worry so much about competing with each other, they can all do their own thing. They can develop a certain distinctiveness. But over the last half century, we got rid of much of the trade barriers we used to have, and the trade percentage of global GDP increased from less than 25% to more than 55%: 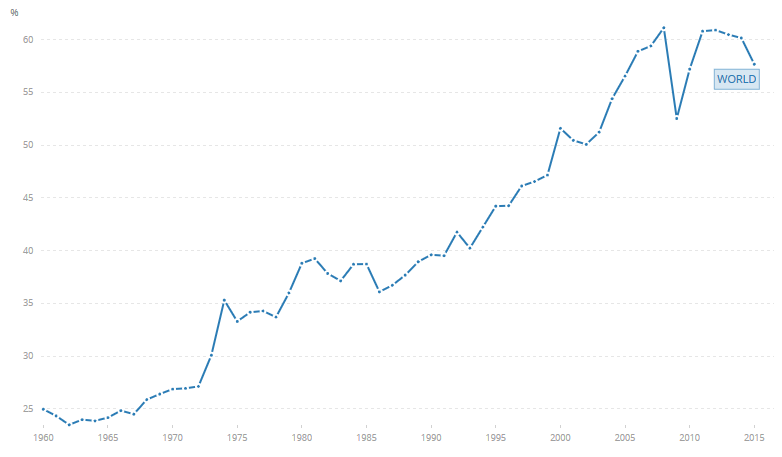 The more countries trade with each other, the more they must compete with each other to be economically successful. It’s one thing when you’re growing apples to sell to your own people–it’s another thing when you are trying to sell apples to some third country. That third country doesn’t have to buy your apples. It can grow its own, or buy them from someone else. Your apples have to be cheaper and better than everyone else’s apples.

This is what many people like about markets. The competition forces us to become more efficient and more innovative, to improve the things we make and the services we render. The thing is, the same strategies for encouraging efficiency and innovation tend to work everywhere. In the academic literature, when people write about what facilitates prosperity, particularly in a competitive global marketplace, they tend to describe a suite of behaviours which all countries can pursue and sets of institutions which all countries can adopt. To stay competitive, countries have to become more similar to each other. The deviants lose ground. And weak, poor countries get abused by strong, rich countries.

This means that the distinctive, traditional “American” or “British” values which conflict with these imperatives have to be jettisoned. To make our economies competitive, we have to make our individual citizens competitive, and that means we have to make them into driven, highly educated, hard working people. It also means we have to avoid paying them more than we absolutely have to. The most successful countries will be the countries which develop the institutions and policies which produce people who adhere strictly to all of this. People who put their careers first. People who are willing to move anywhere to get ahead. People who will take on any amount of debt to get the degree they need.

These people are the people who reject the traditional, communitarian notion of happiness–they don’t stay in the town they grew up in, get married in their early 20s, and raise a family in the same churches and schools they themselves grew up in. These are the people who go to the university far away, then move to the big city. They’re the people who are too busy with their careers to get married until their 30s, if they get married at all. Statistically, if they do get married, more of them will also get divorced. They internalise the notion that self-actualisation is the most important thing, that the career is where you get it, and that spouses and children have to fit into that story if they want to stick around.

All these unmarried, work-first city people need to get their sex drives satisfied, so casual sex has to be invented and relentlessly promulgated, reinforced both by birth control technology and by the slow erosion of the laws and norms which once discouraged premarital sex, adultery, sodomy, and every other kind of sex which makes the economy more efficient rather than less efficient. To really compete, the economy can’t make use of just half the workforce. Women have to enter the workforce, then they have to be socialised to put work first just like the men, and that means they’ll need access to casual sex too. Discriminating against women is economically inefficient, so we have to knock that off and make them equal across the board. The same goes for racial and ethnic minority groups–an efficient economy won’t waste their talents. To facilitate the end of discrimination on the basis of race or gender, we have to blow up the distinctions which give these categories meaning to people. Gender becomes a spectrum, race becomes a construct. Transgender and non-binary identities spring up into the collective consciousness. People begin having multiracial offspring. The traditional values have been rendered economically obsolete, so we obliterate them.

An efficient economy will happily poach workers from other countries. It will even take the poor and uneducated, knowing not only that even ordinary workers make rich countries richer but that their children and their grandchildren will contribute to GDP for generations to come. The right thinks the migrants change us–but we change them. To compete in western societies, the migrants and their descendants have to adopt western values. They have to go to the schools and universities where they are given the training to compete, and in these places they learn the market’s values. Once upon a time white, Christian westerners lived traditional, communitarian lives. But market imperatives compelled them to abandon their values, to assimilate into a borg. The same thing happens to the migrants and their children. Islam is as readily effaced by the market as Christianity was, twisted in the western countries into an unrecognisable form. There’s a reason the terrorist group Boko Haram has a name which roughly translates to “Western Education is Sacrilege”. Its values cannot survive contact with the institutions and value-morphing mechanisms of western market states. All it can do is attempt to hide the people of developing countries from these forces, miring them in poverty in the process. The migrants are just like the rest of us–they come to the big western cities to survive and compete in the market’s great, terrible game. And they must watch as they, or if not them then their children, surrender everything about themselves which was distinctive to win. The market is the melting pot, and melting burns.

What becomes of the work-first yuppies in the cities? Our expectations have been so heavily reshaped that we can never be satisfied by the traditional lives which satisfied our parents, but we will all too often find that the self-actualisation we were promised in our careers eludes us. We exhaust ourselves trying to find the career that completes us, and when we tire of that we plow our way into the mess that is the modern dating world, and when that goes south we make another run at finding occupational fulfilment. Back and forth we go–always trying very hard, always being productive and efficient, and accomplishing a great deal for our employers and very little for ourselves. And perhaps as time goes on we drink more booze, sip more coffee, whatever it takes to go on. But that’s okay with the market. It needs us to work hard, it doesn’t need us to be happy.

If we really get fed up, we can go looking for community. We can hole up in little enclaves with other people who are politically, religiously, ethnically, or sexually like us. But those enclaves make us weird and isolated from the rest of society, and the time we spend in them doesn’t improve our CVs or help us get ahead. Some of us will go back to the suburbs and try to copy our parents, but it will never quite get us where it got them. The desperation and ennui that has long infected the suburbs will get us harder. We may not be able to live without community, but we also can’t live with it anymore. We want more–we don’t just want the distinctiveness that comes with being part of a group, we want the distinctiveness that comes with being a fully self-actualised individual. We are groping after god, now. A white picket fence just doesn’t cut it.

What awaits us? Too many will become BoJack:

Of course, if we found a way to rein in the market, to restore space for inefficiency, some of us might find other ways to live. But why do that when free trade can help us score piles of plastic on the cheap?