According to the administration’s own analysis, the deregulation will save the coal industry $28-$31 million per year. Somewhere between 470 and 1400 additional people will die prematurely each year due to the increase in air pollution. There will also be annual rises in asthma (34k-120k), lost work days (35k-48k), and school absences (7.7k-48k).

Now, for many people that would be enough of a reason to oppose the plan, even if you didn’t believe in climate change. Many of us think human lives are worth more than $66k. The EPA itself likes to value human lives at about $9.1 million apiece. But let’s also take into account the cost to the economy of premature deaths. One study of premature death in cancer patients estimates that if an American dies 20 years earlier than they otherwise would, this reduces lifetime earnings by an average of $413k.  If air pollution is comparable in the number of years it takes from its victims, this would mean the economy could expect to see $194-578 million in lost lifetime earnings for each year the policy remains in effect. Here’s how that would revise the “savings”:

But wait, it gets worse. Asthma costs $3,100 per asthma patient per year. This adds up rapidly, because the cost doesn’t just happen once–we have to pay the asthma cost for each new asthma case every single year. In the first year, asthma would add $105-372 million. We would keep adding more new asthma patients each year, so the next year this figure would double, then triple, then quadruple, on and on and on. Out of kindness and respect for our president, let’s just add the cost of the first year of new asthma patients and divide it across our fatality estimates:

Now of course this isn’t straightforwardly accurate. I made some silly assumptions. Maybe dying of air pollution prematurely doesn’t take as many years off your life as dying of melanoma. Then again, maybe I’m being a bit too charitable to only count the cost of the very first year of new asthma patients. If we just went to year two, already everything looks much worse:

Altogether, we’re now talking about losses which in aggregate could stretch into the billions. The sad thing is that this is just one Trump deregulation. The administration is making these kinds of bargains with American lives and wallets across many sectors and departments. The proposed rollback on automotive fuel efficiency standards carries economic costs which make this coal decision look almost trivial by comparison: 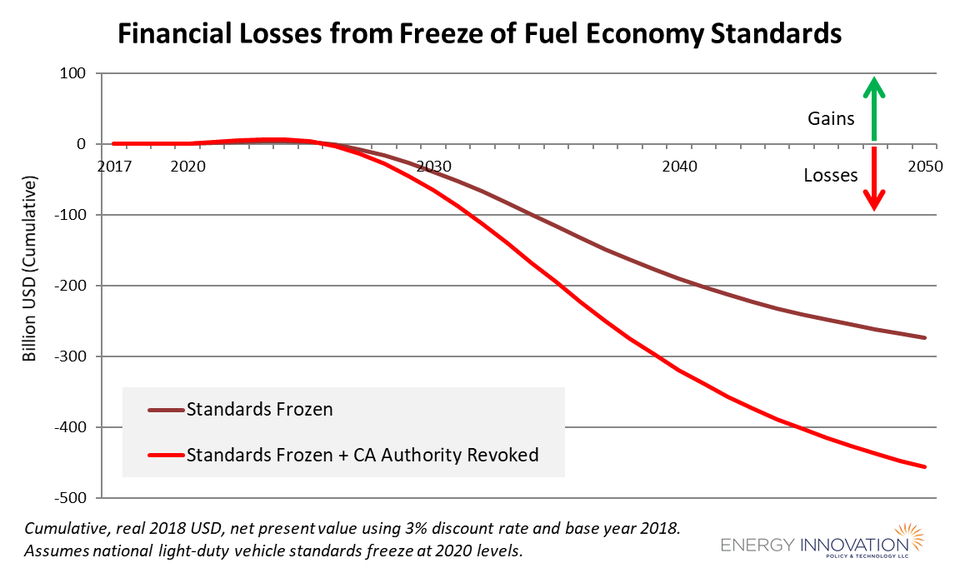 There’s nothing remarkably Trumpian about this. Republicans have for a long time supported nixing the Obama-era regulations. Ohio Governor John Kasich–who believes in climate change–made his intentions clear:

So did Jeb Bush:

As president, I will immediately stop this massive regulation.

We’re steadfast against it, and I will do everything I can to repeal this rule.

We could go on and on. Don’t think for a moment that impeaching Trump and installing Mike Pence would put a stop to any of this. Indeed, even Democratic recapture of the House and Senate wouldn’t be enough, without majorities large enough to override a Republican veto. No, these regulatory decisions can only be reversed by a Democratic president, and we are still years away from another one of those.

Of course, Republicans will tell you that the plan might reduce energy costs by a fraction of a percentage point. But there are other ways to do that. Cutting consumption would also cut costs, as would investing in alternative energy. The entire coal industry at this point supplies barely 50,000 jobs–it would be easy to use infrastructure spending to create more jobs, lower energy prices, and avoid killing or rendering asthmatic thousands upon thousands of people.

Remember when President Trump promised to spend money on infrastructure? It hasn’t happened. So instead, our president seems to have decided we’ve elected the way of pain: