For a long time, we’ve been sending more and more people to college. We’ve sent so many people to college that many graduates can no longer find good jobs when they leave. More than 40% end up working in jobs that used to require no degree:

Some have been waiting for market forces to solve this problem. Way back in 2015, Senator Marco Rubio argued that folks would stop going to university and start pursuing jobs in the trades. Instead of studying philosophy, Rubio suggested the kids take up welding:

But it’s 2020, and Joe Biden is still telling Americans to go back to school and learn to code:

Student debt continues to accelerate into the stratosphere: 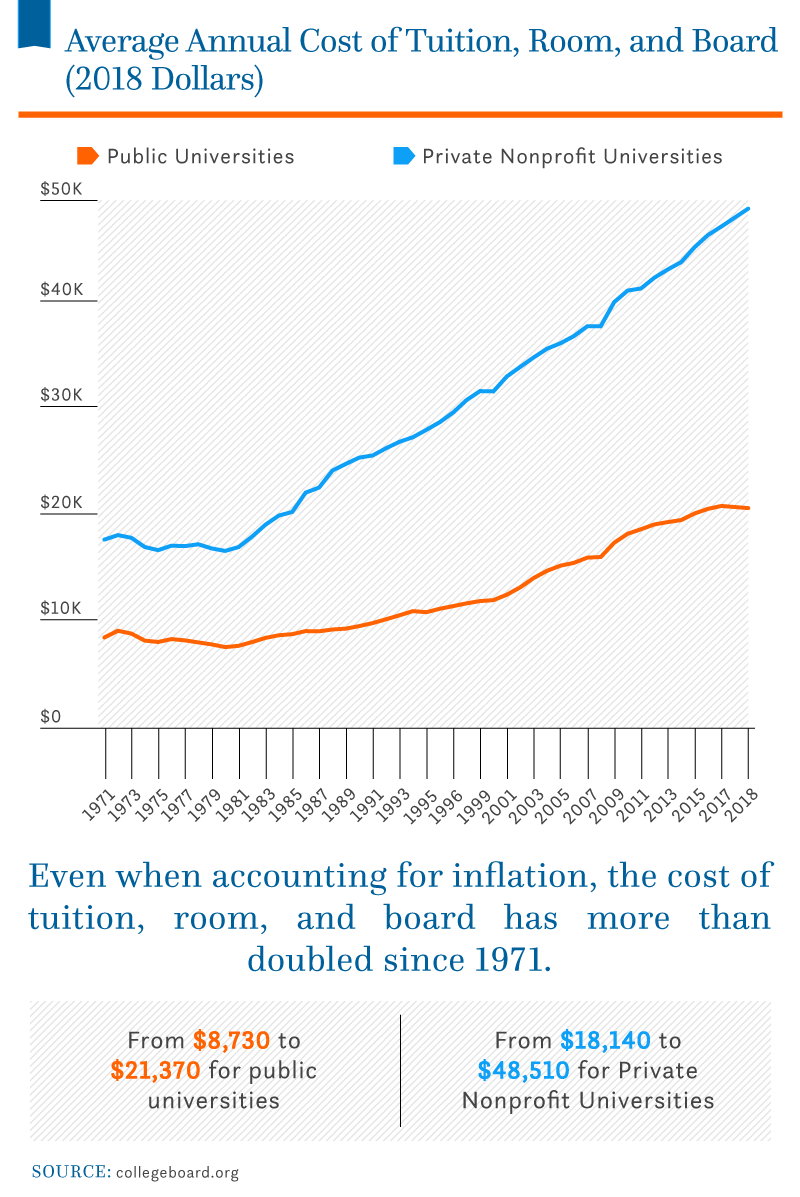 Market forces aren’t solving the problem, for a simple reason–while it is increasingly true that going to college doesn’t guarantee you a good job, it is still true that not going to college makes it overwhelmingly likely you won’t get one. Young people face a choice between betting on themselves and giving up on themselves. The odds are getting less and less favorable, but some chance is always going to be preferable to no chance:

Young people are a captive market–they have little choice but to purchase a college education, if they want to have any hope of a stable and secure future. The universities can keep raising the price because even extraordinarily high levels of debt offer only paltry deterrence.

In 2010 in the UK, the British raised their tuition fees dramatically. Many expected a precipitous drop in enrolment, but this didn’t happen–young people are so afraid of being left with nothing that they simply incurred the debt: 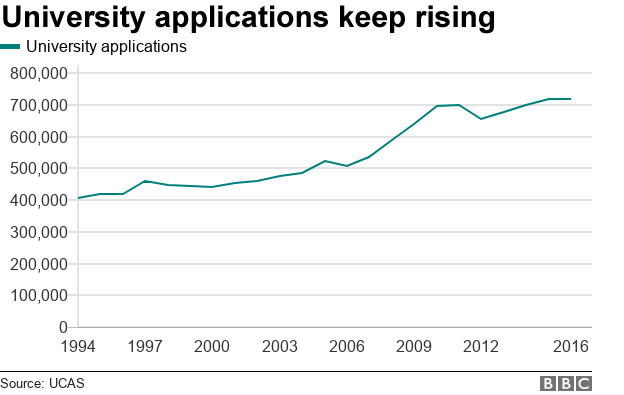 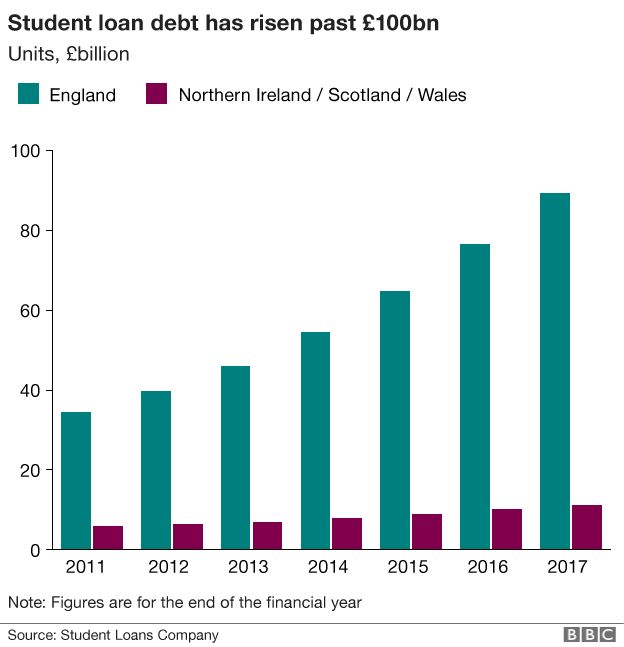 This is only going to get worse. Why? If increasingly everyone is going to college, employers can use a college degree as a baseline qualification. When they do that, even jobs that traditionally did not require a college degree begin to require one. As the number of people who go to college increases, the number of jobs that are available to people who don’t go to college decreases. Why take someone with a high school diploma when there are large numbers of people with degrees to choose from? A college degree no longer guarantees a good job, but in the future it will be the only means of getting any kind of steady work.

The university system used to be about arcane learning. In the very beginning, the universities began as priest-training facilities. From there, they branched out into the academic disciplines–the sciences and humanities. It was only recently that we decided to try to make the university for the ordinary person, and that meant that the university would increasingly focus on preparing people for work.

In the decades following World War II, around a quarter of young people went to university. The university was a golden ticket–if you went and you graduated in good standing, you were very nearly guaranteed a spot in the professional class. Tuition was cheap, and most people left school without much debt. Beginning in the 80s, tuition began increasing dramatically, alongside enrolment. In a 30 year period, we moved from a world in which 26% of young people went to college to one in which 41% do: 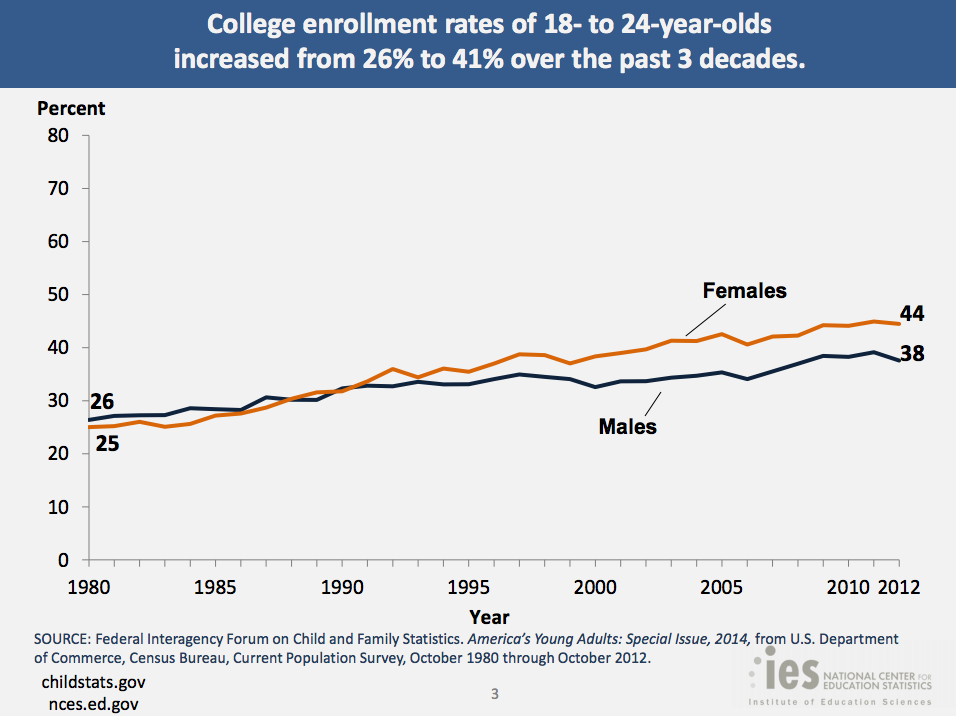 The total percentage of Americans with a college degree increased to nearly a third:

During this period, the cost of a degree elevated, the benefits became less guaranteed, and the debt burden increased.

In the next phase, the degree becomes a means of accessing even most ordinary jobs. This means that to participate in the economy, a young person either needs wealthy parents or a willingness to take on debt. This results in three classes of young people:

The higher education bubble won’t burst through market forces–it will instead create an ever-more stratified society in which most Americans don’t live free lives. What can be done to prevent this? I see two possibilities, which might be pursued alone or in combination: