I have been increasingly concerned by the way Alexandria Ocasio-Cortez (D-NY) talks about race. I see two principal ways people discuss racism:

These two models in turn proceed from different ways of understanding what politics is. For those on the citizenship model, it is our political status as citizens which unites us. The state structures our self-conception as a people. You see this in America in the commitment to the constitution–we think of ourselves as American insofar as we are all committed to a common political project. But for those on the group fetishist model, ethnic and racial groups are primordial and pre-exist political associations. We are united not by political standing but by cultural commitments–language, cuisine, religion, ideology, ethnicity, race, you name it. So whenever two or more distinct cultural groups exist under one political framework, the group fetishist alleges that one of those groups isn’t “independent” or “self-determining”, that there’s a subjugation relationship.

Ultimately, only the citizenship model can provide the conditions under which diverse people can live together. If we recognise each other as equal citizens, we don’t have to fuss about whether we speak the same language, worship the same gods, or look the same color. We can instead work together to ensure every person enjoys equal status and the distributive benefits that go along with that. Group fetishism kills unity. It breaks us up into ever smaller factions, and it makes it difficult for those factions to collaborate.

Initially, AOC appeared to be operating on the citizen model, but increasingly she’s been moving in the group fetishist direction. The result is a confused position on race. Let me show you what I mean…

Recently, AOC made some remarks about immigration, Latinos, and indigenous people:

At about 44 seconds in, AOC makes a human rights claim:

Here she’s framing immigrants as “citizens of the world” with a particular set of rights that come from a conception of equal standing. It’s closer to the citizenship model in its emphasis, even though there is no world state presently capable of protecting or enforcing the rights of world citizens. But then, immediately thereafter, she makes a strange claim:

Because it is a right. It is a right. Because we are standing on Native land. And Latino people are descendants of Native people. And we cannot be told and criminalised simply for our identity or our status. Period.

Suddenly instead of claiming that Latinos have rights that stem from their status as world citizens, AOC claims they have a particularist claim on the land of the United States which stems from blood inheritance. Then immediately after she bestows a special right on Latinos grounded in blood, she pivots and asserts that this is what it is required to avoid criminalising Latinos for their identity or status.

This is very strange, for several reasons:

How did this happen? When AOC began her campaign, she wasn’t so focused on what we owe particular groups. Instead, she was focused on what everyone deserves–Medicare for All, tuition-free college, a jobs guarantee, and a fair criminal justice system:

She asked “who has New York been changing for?”, emphasising that working class families have been denied equal concern for decades. The focus was broad, but clear. If you’ve been left out of the rain, AOC is there for you. Back in June, she did an interview with The Intercept in which she made a point to emphasise solidarity across group boundaries:

But more recently, AOC has fallen in with Ta-Nehisi Coates, who has heavily implied that black and white people cannot do politics together:

Black nationalists have always perceived something unmentionable about America that integrationists dare not acknowledge—that white supremacy is not merely the work of hotheaded demagogues, or a matter of false consciousness, but a force so fundamental to America that it is difficult to imagine the country without it. 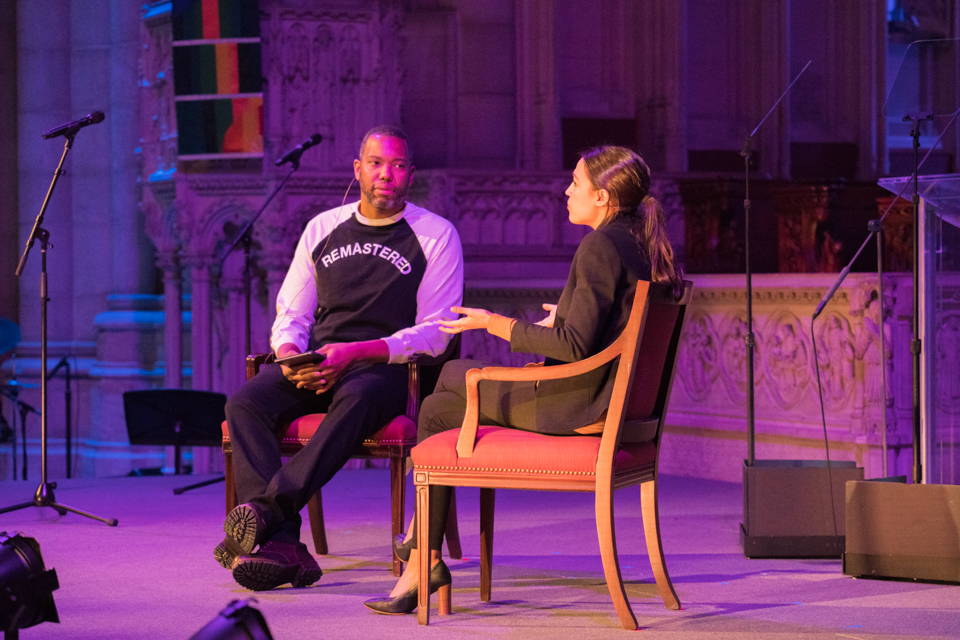 In January, AOC gave Intercept another interview in which she presented a more exclusive picture:

I find the solutions for white communities to be very painful, because it’s very painful for a community to understand and have, go through this, like you can be, the idea that you can be poor and benefit from the color of your skin does not compute for a lot of people.

Poor white people have now been moved from “in the same boat as us” to the group of beneficiaries. It’s a zero-sum framing in which the state either caters to one group or another.

But as we saw in her comments about Latinos and indigenous people, AOC hasn’t established a consistent way of talking about these things. She seems to believe she can hold these conflicting views of race at the same time, alternating back and forth between the unifying citizenship model and the divisive group fetishist model. Ultimately, these frames are intellectually incompatible, and they politically require AOC to take positions that alienate significant numbers of people. She’s can’t be Martin Luther King and Malcolm X at the same time, and the more she pulls in the group fetishist direction in a bid to win support in her district, the less palatable she will become to white working class voters living in the middle of the country.

For too long, left-wing candidates have run campaigns that only appeal to a narrow, affluent, preponderantly coastal audience. If AOC follows that model, it will become much harder for her to contribute to wider left-wing political movements outside her state. AOC has long expressed an interest in bringing left-wing politics to places like Kansas and Michigan. But these states are full of poor and working class white people who have fallen on hard times. If AOC speaks to them as a privileged group rather than as our “brothers and sisters”, she won’t be able to help us win their support.

We’re not just talking about confused political theory–we are also talking about a substantive strategy which reinforces the same racial divisions Republicans have long used to prevent ordinary people from working together to defend their livelihoods. If AOC gets sucked into that tar pit, she will greatly diminish her usefulness to the very people she initially promised to protect.