In the last week, two prominent voices have called for both the left and the center to triangulate on immigration. First, there was left-wing author Angela Nagle, who argues that the left’s commitment to “open borders” is naive, impractical, and damaging to the material interests of domestic workers. Then, from an entirely different direction, Hillary Clinton urged the leaders of Europe to clamp down on immigration in a bid to preempt the further development of Trumpian far right political parties in Europe. Nagle’s piece has been particularly inflammatory–in calling those who support immigration “useful idiots of big business” from the pages of American Affairs, a right-wing publication, Nagle has insulted a lot of people who thought she was on their side. I have friends on the left who are on different sides of this–what follows is my best effort to adjudicate their dispute. 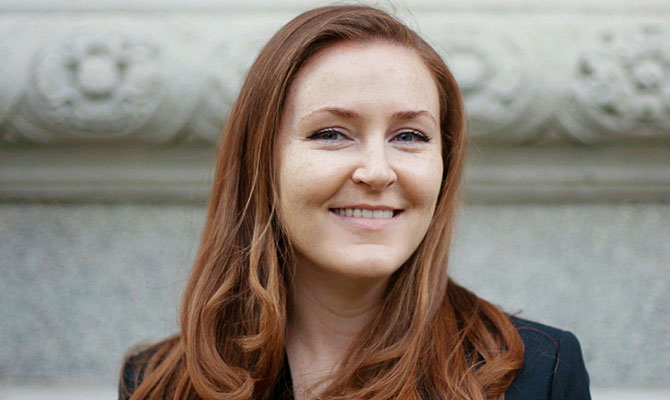 Nagle’s position is essentially this:

Today’s well-intentioned activists have become the useful idiots of big business. With their adoption of “open borders” advocacy—and a fierce moral absolutism that regards any limit to migration as an unspeakable evil—any criticism of the exploitative system of mass migration is effectively dismissed as blasphemy.

Her argument is polemically constructed but comes down to a claim that immigration–at least under current conditions–runs down the wages and living standards of working class people and that the left has a duty to defend them:

There is no getting around the fact that the power of unions relies by definition on their ability to restrict and withdraw the supply of labor, which becomes impossible if an entire workforce can be easily and cheaply replaced. Open borders and mass immigration are a victory for the bosses.

Interestingly, she attributes a pro-immigration position to Hillary Clinton so that she can tie left-wing support for unfettered immigration to Clintonism:

In a public speech on immigration, Hillary Clinton said: “I believe that when we have millions of hardworking immigrants contributing to our economy, it would be self-defeating and inhumane to try to kick them out.” In a leaked private speech delivered to Latin American bankers, she went further: “My dream is a hemispheric common market, with open trade and open borders, some time in the future with energy that is as green and sustainable as we can get it” (though she later claimed that she only meant borders open to energy).

But Clinton herself this week took a quite different position:

I think Europe needs to get a handle on migration because that is what lit the flame…I admire the very generous and compassionate approaches that were taken particularly by leaders like Angela Merkel, but I think it is fair to say Europe has done its part, and must send a very clear message – ‘we are not going to be able to continue provide refuge and support’ – because if we don’t deal with the migration issue it will continue to roil the body politic.

Consistency has never really been her thing. Between the two of them, there are two core claims here:

Nagle also makes an argument about brain drain negatively affecting poor countries, but I want to bracket that so that we can focus on the way immigration plays in the rich countries. Let’s consider each of these in turn.

All things equal, an expansion of the labor force will diminish the market power of individual workers. But the labour market is not simply just a market–the power of workers is heavily influenced by state policy. If the state expands the workforce but expands labour protections at the same time, it can protect its domestic workers from being undermined. States could compel immigrants to join unions, they could fix higher minimum wages, and they could give undocumented workers legal status to prevent employers from using them to circumvent labor laws. The problem is that rich states haven’t been doing this. Instead, they’ve been doing the opposite–weakening worker power while at the same time taking large numbers of immigrants. This enables them to deflect blame for anti-labor policies onto immigrants and foreigners. If pro-labor policies are off the table, workers are left nearly defenseless. All they can really do is oppose immigration, and they are actively encouraged to channel their resentment in this direction.

So unfettered immigration can be bad for workers–but only in a particular context, one which the rich countries have deliberately created. So if we roll over and say immigration is bad for workers, what we are saying is that we don’t think we can change this context. We don’t think we can implement pro-labor policy, so we–like the workers themselves–are opposing immigration because it’s the only move we perceive to be available.

There are other, worse arguments that are sometimes made here (albeit not by Nagle)–some people argue that unfettered immigration leads to the erosion of public services, as a fixed quantity of state funding for public services must be divided across more heads. The trouble with this is that immigrants contribute significantly to the economies of their new countries, and in many cases they contribute more revenue than they consume in services. But because states are doing austerity and running down their public services, it is once again quite easy to blame this decline on immigrants for “overstressing” them. Here immigrants are ready and willing to contribute revenue to help sustain these programs, but the states are cutting them anyway for ideological reasons and then scapegoating their foreign-born population.

Immigration can be made to work, if the state takes action to support domestic workers and protect them from market power erosion. Right now our states aren’t doing that. The question is whether or not they can be made to do that–whether there is a more robust pro-immigration response that is politically tenable. This leads us into the next question…

It is obvious how unfettered immigration could help the far right in this context–if the state is committed to handling the economy in a way which persistently exacerbates the negative consequences of immigration and explicitly blames immigration for those consequences, workers will begin organising politically against immigration. If left-wing parties are unwilling to support them in that organising, they will embrace the far right.

The Nagle/Clinton argument proceeds from the premise that this context cannot and will not be changed–that the left will not be able to get control of these states and use them to improve the position of working class people. If working class people associated immigration with an improvement in their own conditions, they would have little reason to oppose it. So Nagle and Clinton must think that we won’t or can’t improve their conditions, at least not without first triangulating on immigration. Until we triangulate, they argue that support for the right will just continue to grow.

This is an example of what I like to call “Manchinite thinking”. Senator Joe Manchin (D-WV) frequently decides that if he doesn’t embrace some conservative position, he will lose office, and if he loses office he will be replaced by a Republican who won’t implement any of his preferred policies. So Manchin frequently acts like a Republican so that Republicans will vote for him so that he can do Democratic things. The trouble is that for Manchin the list of Democratic things gets smaller and smaller all the time–he hasn’t been able to create new conditions in West Virginia in which Democrats are popular and competitive by repeatedly triangulating. Instead, West Virginia has continued to drift to the right, and Manchin has had to drift along with it.

The problem with Joe Manchin is that sometimes he’s actually right–sometimes we really are in a situation in which we must embrace an unpalatable position to remain politically competitive. Manchin nearly always thinks he’s in this situation, and because of that he almost never defends Democratic Party positions, much less more substantively left wing views. But we would also be making a grave error if we assumed that Manchin is always wrong, and that we never have to triangulate. Part of what makes politics hard is that it’s very easy to triangulate too much and stand for too little, but it’s also very easy to triangulate too little and get run out of office.

So on immigration we need to decide what we can get away with politically, while at the same time trying to build a society where we can simultaneously help immigrants and protect workers. What does that actually look like?

In the United States, I think it remains politically possible to do some kind of amnesty for undocumented immigrants. Despite the very loud and extremely online alt-right voices Nagle has spent much of her career studying, polls still show that immigration is pretty popular here:

That said, I do think we should stop calling for “open borders” and for the “abolishment” of ICE. The strongly radical language polls very poorly: 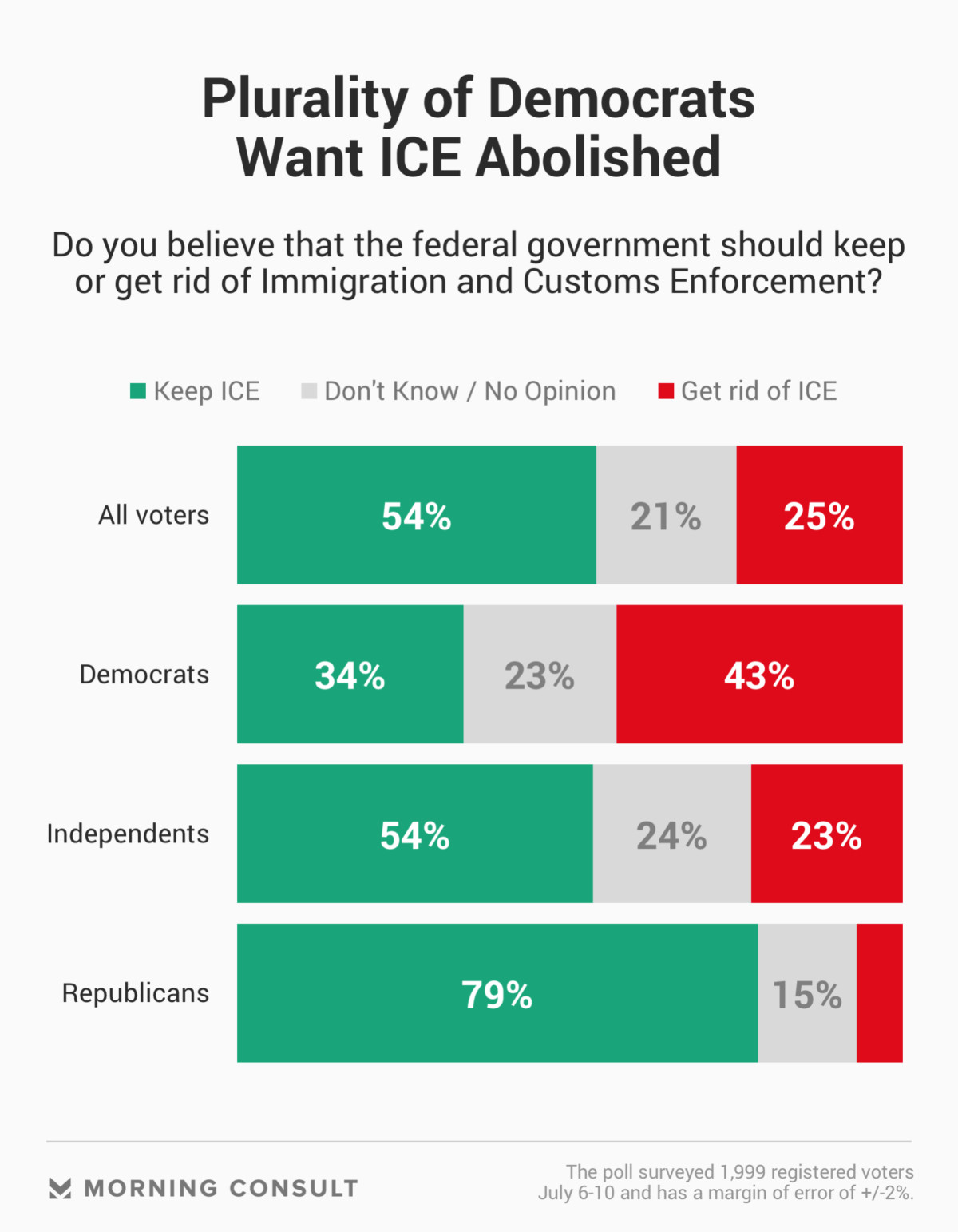 President Trump has deflected Americans from the getting the immigration reforms they want by portraying those immigration proposals as more radical than they are, and parts of the left have inadvertently helped him do this. “Comprehensive immigration reform” is perceived differently from “open borders,” even though many people who call for open borders would in practice support some kind of comprehensive immigration reform (even if such reforms would fall short of their ideal theory). Our association with open borders has eroded our credibility and turned what should be one of our issues into an issue which helps the president. To break that association, we may end up having to make some kind of concession in a reform deal–but any such concession should be largely symbolic. Building the wall, for instance, would not meaningfully impede new immigration or harm the lives of extant immigrants, but it would send a symbolic message that we are still willing to have some level of border security. We should only offer to build the wall as part of a package which gets millions of undocumented immigrants legal status with a clear and simple path to citizenship.

In Europe, the political situation on immigration has quietly improved a lot:

Clinton is a few years late to the party–Germany stemmed the flow of migrants and refugees into Europe a few years ago by making a morally dubious deal with the Turks. Left-wing parties are already increasingly competitive in many European countries, though many have achieved this in part by getting a little Manchinite about immigration. It remains to be seen whether this deal with Erdogan enables Europe to develop a substantive left-wing solution to its long and painful economic crisis–many politicians in Europe are, like Manchin, more interested in keeping their jobs than in building a long-term strategy for Europe that is viable.

In Europe, they’ve already followed the Nagle/Clinton advice. In America, I think there’s still some scope for something bolder–to a point. Amnesty? Yes. Abolish ICE? Not so much.