An American Class Divide: The Aristocrats v. The Professionals

In the United States we usually don’t like to think about ourselves as members of economic classes. Most of us, when asked, identify as middle or upper-middle class. But of course there are class differences, and in recent years we’ve started to talk about them a little more. People like Thomas Frank have drawn attention to “the professional class” as distinct from “the working class”. The professionals go to college and get degrees in things like engineering, medicine, law, finance, business, or computer science. They get access to those prized STEM and management careers, to the jobs in the court rooms, on Wall Street, and in Silicon Valley. In contrast, members of the working class often don’t go to college. In recent years they sometimes get uneconomical degrees and end up underemployed with lots of debt. But while the professional/working distinction is important and needs to be drawn more often, I’d like to take some time today to draw another distinction, between the professional class and what I’d like to call the “aristocrats”. 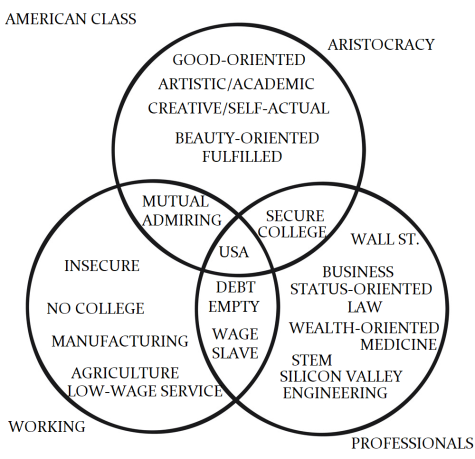 America isn’t meant to have an aristocracy and it doesn’t have one in the formal sense. There’s no group of Americans with noble titles like “duke” or “earl”. What makes the aristocrats distinctive is that they don’t feel any financial compulsion to pursue the professional careers–the fact that engineers, doctors, and lawyers make good money and are well-regarded is largely to irrelevant to them. This is because the aristocrats have two distinguishing features:

The professional class tends to think that working hard and making a lot of money just is virtuous–it values the hard work one has to put in to get a professional degree. They respect med school and law school simply because these things are hard and lead to wealth. You can be professional class and have more money than someone in the aristocracy, if your motivations in life are oriented around material and status accumulation. Aristocrats don’t think life is about money or even about hard work–for them, life is about self-actualization in a broader sense, about becoming one’s best self, about embodying goodness in some sense.

The professional degrees aren’t heavily specialized and they tend to involve a lot of memorization. So instead, aristocrats pursue degrees which are more about unleashing their creativity and distinctiveness. This tends to mean art degrees and it also tends to mean formal academic degrees which are not obviously tied to discrete careers. Aristocrats major in whatever they love–professionals major in whatever brings money and status.

A lot of millennials would like to be aristocrats, but their families don’t have the money to support them in this. Sometimes the families push their kids into professional degrees or working class jobs and sometimes the millennials try to be aristocrats anyway without adequate support. When they take this latter path, they are often forced to accumulate large amounts of debt which, once they finish school, force them into the careers that are available rather than the ones which actualize them. When this happens these aspirant aristocrats are effectively thrown back down into the professions or even into the working class, and that breeds an understandable resentment.

Others go into the professions or into working class jobs only to find that there’s something fundamentally dissatisfying about them, because they aren’t arenas for creative self-expression. So they buy stuff, but buying stuff can’t replicate the self-actualization one gets from participating in art, activism, or academic life.

One of the key tensions in American life is that Millennials were encouraged consistently throughout their lives to think of self-actualization through work as something which might be possible for them. Do what you love, right? But only a very narrow slice of our jobs really offer spaces for people to be fully themselves. Most Americans have to live their lives in accordance with the needs of the market, of their employer, of their parents. This deferring to system imperatives is necessarily stifling. Millennials were encouraged to shoot for the moon. They thought if they missed, they’d still land among the stars. But that’s not how it works. If you miss, you land among the wage-slaves. And there’s nothing fun about being dependent on wage income, even if it’s salaried.

The professional class invents a wage-slave morality to insulate itself from how fundamentally disappointing its existence is. Many of its members constantly display and show off how hard they work and how busy they are, and they constantly contrast themselves with the working class–which didn’t go to college, or didn’t choose degrees that were “hard enough” to be economical. It even attempts to assert its moral superiority over the aristocrats–after all, the aristocrats don’t have “real jobs” and don’t know how to work hard. This is all largely a defence mechanism–the professions are incredibly time-consuming, demanding jobs in which a person completely turns their life over to the market in exchange for a six figure income. They are high status and high paying, but not especially high satisfaction, and on some level most of the professionals know this. It’s why so many of them want to retire or semi-retire as young as possible (continuing in their professions but drastically cutting their hours below industry norms). Some of them turn to self-help books about getting ahead in their careers or “self-care”. But chasing promotions and weekends isn’t the same as doing genuinely fulfilling work.

One of the things I’ve begun to notice as I’ve pursued an academic career is that what I do is really not like what my friends in med school or in engineering jobs are doing. There is a fundamental sense in which I am much freer than them. Most of what I do is stuff I genuinely enjoy doing, most of it involves autonomy and creativity on my part, and most of it can be done on a schedule of my own design in locations of my own choosing. I even have time to write these blog posts. I can do this because I have a material cushion provided by my parents and because my parents didn’t force me into the professional class. They never pulled the rug out from under me and switched from saying “you can do whatever you put your mind to” to “you have to do something that pays”. The overwhelming majority of people–even people from otherwise quite affluent families–are not this lucky. I have much less money than my professional friends, but there’s still a sense in which I am richer.

Our political debates have become very professional class versus working class. The professions are content with their material situations, but they feel vaguely dissatisfied. Some of them have channelled this dissatisfaction into workplace politics, trying to carve out genuinely fulfilling, welcoming, diverse spaces. But while this kind of politics can make workplaces feel a little better, it can’t fix the fundamental problem with the professions–they don’t deliver what they promise because they leave professionals embroiled in wage-slavery and the power structures which accompany it. On the other side, the working class is increasingly dissatisfied with its material situation. It’s not foolish enough to imagine that its jobs will deliver spiritual satisfaction–many of them go to church or the bar for that–it just wants security. But often times it doesn’t know how to get this, blaming immigrants, foreigners, and minorities for conditions which have their roots in economic structures.

The aristocrats are unrooted in this political climate. Some are apolitical ascetics, focusing on their passions and crafts secure in the knowledge that there is very little that could happen politically which would disrupt them. Some attempt to police the class boundary, gate-keeping to prevent those they consider unworthy from chipping away at the tenability of the aristocratic position or from attempting to join it themselves. Others embrace as one of their passions the political project of expanding access to the aristocratic life, a life free from market imperatives. But even in this third case, these find that they have to deal with political movements dominated by members of the professional and working classes which may not be able to see the value in expanding the aristocratic space or may not have the time or energy to undertake the study necessary to strategize effectively about how to do so. It’s easy for aristocrats to find they’re out of touch with those from other classes, that they’ve spent too much time in aristocratic bubbles (academic and artistic milieus) to communicate effectively or share what they’ve learned with others. In some cases these bubbles can make it hard for aristocrats to remember what kind of problems people in the other classes face and give them blind spots.

The aristocrats and professionals are conflated together, but they’re different and they relate to the working class differently. The aristocracy is the intellectual and cultural elite which concerns itself with goodness and beauty, not wealth and status. Because it is less motivated by these things and less concerned about its own position, it can more easily ally itself with the material causes of the workers. Indeed, allying with the workers is really satisfying for many aristocrats because it contributes to their sense of self-actualization, of being and seeking good. The professions, on the other hand, often don’t share these altruistic motivations. They’re more bothered by the idea of giving poor people money they haven’t earned, and their fixation on meritocracy and defensive contempt for those who would not or could not pursue professional degrees creates in many of them an empathy gap.

It’s not true in every case–there are of course some really wonderful people who choose the professions because they genuinely believe they are the best way to help people, even if they are difficult, time-consuming, and draining. By the same token, there are some artists and academics who have cashed in and choose projects for vulgar reasons. There are some aristocrats in the professions, and some professionals in the aristocracy. But compare the attitudes of academics and artists to the attitudes of doctors, lawyers, and business executives more generally, and the difference sticks out like a sore thumb–the former is largely populated by aristocrats, and the latter by professionals. To tell the difference, ask yourself–is this person in this career because they think it is the best way to be or do good in the world, or are they in it for the cash or the status? Politically, we can appeal to the aristocrats’ attraction to meaning and goodness, but the professionals won’t come along unless we cater to their self-interest. It’s important that we always keep in mind who we’re talking to, and what motivates them.