The Democratic Party Can Still Be Captured, and It’s Worth Doing It

You know what surprised me? So many people took Bernie Sanders’ defeat as a reason to give up on the Democratic Party. When Sanders announced he was running, one of my good friends messaged me. He was so excited! There was someone challenging Clinton who believed in things! But I gave him a cold shower. The Democratic Party gave up on stuff like single payer and tuition free college ages ago! Sanders was polling in the single digits. We’d be lucky if he got 10%! I eventually came around and saw that 2016 wasn’t going to be a rerun of 2012. Something fundamental had changed–people were frustrated with the status quo but in a deeper way than they were in 2008. They wanted someone bold who promised to do big things. Giving nice speeches about how much you care is okay, but it doesn’t pay your medical bills or your student debt. Politicians today have to persuade people they’ll do exciting things. This caused problems for the Democratic Party establishment. It was good at a lot of things, but exciting policy wasn’t one of them. Sanders came quite close to beating Clinton, and then Donald Trump–the least popular major party presidential candidate in history–did it. This changed the way I viewed the Democratic Party, in ways that have only slowly become clear to me.

Sanders came in with nothing. He polled in single digits and he had no money. There was no one in the party machine who wanted him to do well. In spite of this, he won a bunch of states and outraised Clinton in multiple months. People say that the Democratic Party is useless to the left because it’s in thrall to the big donors. But Sanders was more than competitive financially with Clinton relying famously on donations which just averaged $27 (although The Washington Post wants us to know that sometimes the average was as high as $29.14). Yes, it’s true that in general, big donations are becoming more important politically and that candidates and parties which rely on grassroots fundraising have to work harder to compete: 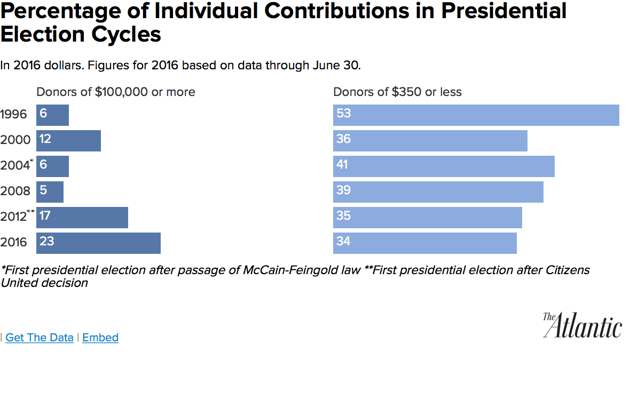 But it’s still possible for them to compete, even from a deeply disadvantageous starting point. Sanders was an independent. He had no one. The Republican Party had spent years setting the stage for a populist outsider. The Tea Party had been challenging establishment Republicans in primaries since 2010 and pushing conservative media in an ever more overtly right nationalist direction for at least as long. It did most of this with the money of a few billionaires like Sheldon Adelson and the Koch brothers. But the Democrats nearly nominated an outsider with none of this infrastructure. For someone as cynical as I was in that 2011-2015 period (and believe me, I wrote plenty of blog posts showcasing it that you can still read), this was a revelation.

Of course, party capture is really challenging. Even if someone from your faction gets the leadership, they can be sabotaged by disloyal ground troops. The Tea Party, despite its best efforts, never cleaned out establishment figures like McCain, Murkowski, and Collins. Those three were enough to stymie Obamacare repeal (though they were happy to go along with the Trump tax plan). But while the Republican Party doesn’t look exactly the way they want, it sure doesn’t look exactly the way Jeb Bush wants either.

The right tried the whole third party thing. It tried Ross Perot and Reform. It tried Ron Paul and the Libertarians. But in the United States, third parties aren’t a great investment. It costs a lot of money to get people to pay attention to third parties. Theodore Roosevelt couldn’t take the Progressive Party past 2nd place, and he’s one of the most talented politicians in the history of the country. It’s cheaper to fight the beast from within. Why throw money at Gary Johnson when you can buy yourself a Ted Cruz? Sure, Donald Trump eventually stole leadership of the movement from his fellow billionaires, but they still own the congress and he’s still one of them.

The Sanders campaign proved that the left doesn’t need billionaires to pose a material threat to the Democratic establishment. There are two models it can use:

If you’re American you may not have heard of UKIP–the UK Independence Party. UKIP is one of the most successful political parties of the last 20 years, but it never won more than a single seat in Britain’s parliament. UKIP is devoted to taking Britain out of the European Union. It peaked in 2015, when it won 12.6% of the vote. UKIP petrified the British Conservative Party. The Conservatives believed for decades that leaving the European Union was a vote-losing position, but UKIP began siphoning off crucial percentage points of the electorate. To appease them, Prime Minister David Cameron reluctantly agreed to a referendum on Brexit, and eventually he lost. In 2017, UKIP only got 1.8% of the vote, but it doesn’t care because it’s already accomplished its purpose–it made the British political establishment embody its values. In the same vein, much of the Republican establishment agreed with the Bush administration’s willingness to consider amnesty for undocumented immigrants. American conservatives used the primary system to intimidate the Republicans into going their way, but the Tea Party could have directly run anti-immigrant candidates to accomplish the same purpose, as UKIP did.

There are a few different movements which seem to want to follow one or both of these models, ranging from Brand New Congress to Democratic Socialists of America. Some on the left scoff at these movements because they don’t think we can end capitalism without abandoning the Democratic Party altogether. But splinter movements which attempt to deplace the Democratic Party completely have no connections to ordinary people and there’s no reason to believe they can create those connections out of thin air in a country where third parties have always done terribly. We don’t need a left version of the Libertarian Party–we need a left version of the Tea Party, and at most UKIP. Sure, that left organization probably won’t end capitalism. Maybe all it can do is make the Democratic Party into a 21st century, less racist and less sexist and less homophobic version of the party of FDR and LBJ. But you know what? For ordinary people, that really is a heck of a lot better than nothing. We might really be able to get single payer. If we have to wait for the robots to transform our economic system, we can at least stop health insurance companies from bankrupting people in the meantime. We can at least ensure that when our technology progresses to a point where more transformative change is possible, we have the right kind of political movements on the scene to make the most of those moments.

The alternative–sitting around in isolated rooms talking to likeminded people about how bad and useless everyone else is–doesn’t cut it.

It starts with this year’s midterms. The most important thing isn’t the number of seats the Democrats take from Republicans, it’s the number of left primary challenges and their success rate. If the end of Trump looks like Oprah Winfrey or Cory Booker, we’ll just end up right back where we started, and the next Republican nationalist might be more capable than Trump. Winning isn’t enough–the Democrats have to win the right way, with people who have the right convictions and the right competencies.