Britain: For Pity’s Sake, Stay in the EU

On 23 June, Britain is having a referendum on its membership in the European Union. I care deeply about British politics–I’m doing my PhD there as I write this. But more importantly, Brexit would be a stunningly poor choice, undermining British interests in both the short and the long-term, and I would feel deeply remiss if I didn’t do my part to point this out.

There has been a lot of sniping back and forth in the British press about the economic consequences of Brexit. The truth is that it’s very difficult to know precisely what the economic impact of Brexit will be because Brexit puts Britain’s economy at the mercy of other countries. To make Brexit work economically, Britain will need to either retain its access to the European market or gain new access to a comparable market. What are Britain’s prospects of doing either?

Brexit supporters argue that Britain could cut a deal with the EU similar to the deal the EU has with Norway or Switzerland, allowing it to retain access to the European market from outside the EU. They argue that because Britain’s balance of trade with Europe is negative, the EU has a great deal to lose by creating trade barriers with the UK. In raw terms it’s true that British imports from Europe exceed exports, but Britain is only 6.6% of the rest of the EU’s export market, while the EU accounts for 51.4% of Britain’s:

This means that the UK depends far more on the EU than the EU does on the UK, giving the EU massive negotiating leverage when it makes bilateral trade deals. This is why Norway and Switzerland are still subject to many EU rules. The Norwegian government claims that it has to incorporate about 75% of all new EU laws into domestic legislation, commenting:

The most problematic aspect of Norway’s form of association with the EU is the fact that Norway is in practice bound to adopt EU policies and rules on a broad range of issues without being a member and without voting rights. This raises democratic problems. Norway is not represented in decision-making processes that have direct consequences for Norway, and neither do we have any significant influence on them. Moreover, our form of association with the EU dampens political engagement and debate in Norway and makes it difficult to monitor the Government and hold it accountable in its European policy.

This includes the rule requiring them to accept EU immigrants. So if the EU were to agree to keep the UK in the EU, the UK would likely be subject to many of the same EU mandates–with no substantive opportunity to have a say in any of them. Brexit supporters looking to shrink immigration figures are stuck between a rock and hard place. They must either give up access to the European market or accept that Brexit will make no difference to migration.

Britain might not even get the choice–the sad political reality is that if Britain leaves the EU, the EU will need to make an example out of Britain to deter future countries from leaving. This means that the EU will have strong political reasons to restrict Britain’s access to the European market even at substantial financial cost to itself. No one knows for sure how far the EU would be willing to go to punish Britain, but it’s entirely possible there could be punitive tariffs, even sanctions. Jean-Claude Juncker, President of the European Commission, has ominously said as much:

I’m sure the deserters will not be welcomed with open arms…If the British should say No– which I hope they don’t–then life in the EU will not go on as before…The United Kingdom will have to accept being regarded as a third country, which won’t be handled with kid gloves…If the British leave Europe, people will have to face the consequences–we will have to, just as they will. It’s not a threat but our relations will no longer be what they are today.

If Britain is shut out of the European market or wants to look elsewhere to avoid being subject to EU rules with no say in them, it’s left looking at the other half of its export market. The trouble is that while Britain can negotiate with the entire EU at once, the non-EU half is heavily divided, forcing Britain to negotiate individual bilateral trade agreements. Here are Britain’s top 25 trading partners and the percentage of UK exports that go to each: 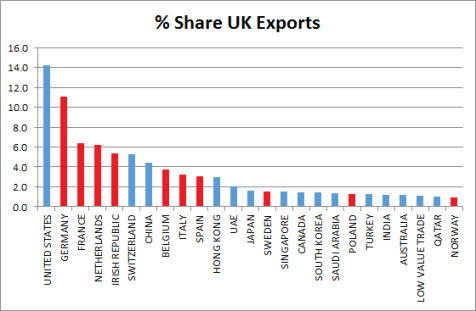 I’ve highlighted in red the countries that are part of the European Economic Area. Without these countries, Britain’s export strategy clearly relies on improved trade relations with the United States along with a series of bilateral agreements with a very diverse set of countries around the world. The problem is that the United States is firmly against Brexit–President Obama has openly threatened Britain, stating unequivocally that there will be no bilateral trade deal with the United States anytime soon if Britain excludes itself from the EEA (and thus from TTIP):

Brexit supporters have responded to Obama by taking him too literally–pointing out that the United States can negotiate trade deals with more than one country at a time, that there is no “queue”. But they’re missing the point–Obama is not stupid, he knows the United States could negotiate a bilateral deal with Britain if it wanted to do so. He is clearly threatening to punish Britain if it fails to align itself with American interests by stalling on a new trade deal for 5 or 10 years. America wants Britain to stay in the EU so Britain can push the EU in an American direction. If Britain leaves, its diminished influence in Europe diminishes Britain’s usefulness to the United States.

Another response is to point out that Obama is a lame duck and that the American public likes Britain. Both of these things are true, but equally irrelevant. The American public likes Britain, but right now it hates trade deals. Both Bernie Sanders and Donald Trump have won support by opposing “job-killing” trade deals. This is the political climate in America today:

Hillary Clinton was Obama’s Secretary of State and has unsurprisingly taken the same stance as the President.

So the big short-term risk is that in the game of musical trade deals Britain is going to be the one without a seat when the music stops, shunned and isolated by both the EU and the US and unable to put together a strong enough collection of bilateral trade deals fast enough to make up for it.

Some Brexit supporters claim that while Brexit might be destabilizing in the short term, in the long run everything will be okay. But this view ignores the essential role the EU has in dealing with collective action problems. There are a number of international issues that are not possible to resolve without big transnational institutions like the EU to impose rules across national borders.

In the wake of the Panama Papers, many people are understandably frustrated with tax avoidance. In the 21st century, capital is highly mobile, and this enables individuals and companies to move their money around the world to exploit differences in the tax laws of different countries to reduce their tax burden. So when an individual country tries to raise taxes, its rich citizens and companies move their capital somewhere else where it will not be taxed as highly, inflicting economic damage on the countries that run higher tax rates. This results in tax and regulatory competition–countries compete with each other to attract business and investment by creating an “attractive business environment”, i.e. cutting taxes and eliminating regulations that protect workers, consumers, and the planet. We end up with a race to the bottom, and whenever any political party tries to deviate from this they are immediately accused of economic illiteracy. The same forces make it extremely difficult for countries to do anything about climate change–each country believes it has a strong incentive to deviate from climate agreements to get a short-term economic advantage over the others.

The solution to this problem is a tax and regulatory cartel–countries have to club together and decide on collective tax and regulatory policies so individuals and companies cannot use capital flight to escape the rules. Countries that refuse to participate in the cartel need to be punished with tariffs and sanctions. In Europe, we call this cartel the European Union. Without the European Union to make and enforce collective rules, collective action problems are unsolvable. If the EU did not exist, we could expect many of the binding regulations protecting workers, consumers, and the planet to begin being repealed by opportunistic national governments with no concern for the long-term social and environmental consequences of their policies. Environmental groups clearly see the implications. As Friends of the Earth put it:

In the field of environmental policy, perhaps more than in any other area, the EU has had an overwhelmingly positive effect. Through its EU membership the UK government has been required to put in place a host of policies with strict targets that are legally binding, and to provide regular publicly available reports upon its performance in relation to those targets. If the UK exits from the EU but remains part of the European Economic Area the huge progress made in improving the UK environment could be lost in the absence of external pressure and auditing from EU actors, particularly in the areas of habitats, birds and bathing water, whilst the UK would still be subject to a wide range of EU laws but with little influence over their content. A total withdrawal suggests a much wider erosion of environmental policy, which is perhaps the intention of the right within and without of the Conservative Party, but one which risks significant environmental damage to the UK.

The EU has not yet integrated enough to give us its full benefits yet, in no small part because so many people want to leave and rejoin the race to the bottom in earnest. But in the long-term, if Britain and other countries support the development of common European policies on taxes and regulations, the EU has the potential to empower the people of Europe to once again make their own decisions about what tax and regulatory policy should look like without living in fear of capital flight. Too often, the EU debate is about sticks, but this is the big carrot–the EU makes it possible to potentially solve problems that are otherwise completely unsolvable.