Is Trump Being Racist About Judge Curiel?

Over the past week, Donald Trump has been repeatedly attacking Judge Gonzalo Curiel, claiming he is unfit to handle the Trump University case because he is a “Trump hater” and that he is a Trump hater because he is Mexican. This looks straightforwardly racist, and many people from both parties have accused Trump of racism. But two days ago Trump did not appear ready to back down, instead instructing his people to intensify their criticism of the judge and members of the media who go after Trump on the issue. Then yesterday his campaign seemed to do a U-turn–it issued a statement alleging that Curiel is biased because of his professional associations rather than because he is Mexican, and announced that Trump does not intend to comment on the case any further. This implies that Trump really did think there was a way to make some sort of political gain here, but now at the very least has determined that he has nothing further to gain by talking about it. What did Trump think he was going to get out of this? For the past couple days I’ve been trying to figure this out, and I have a theory of what has been going on in his head.

What Trump said about Judge Curiel looks really racist, and politicians don’t get anywhere by making themselves look obviously racist.

The fact that Trump nonetheless wanted to push this story can only indicate two things:

Many people are ready to go with #1, but my bet is on #2. So how does Trump say something like this and believe that not only is he not being racist, but that the story is a winning one for his campaign?

I think he starts by making in his head a distinction between two different claims:

Trump said that he’s going to get lots of support from Hispanics:

He has at other points indicated that other judges of Mexican heritage could be fair to him:

Tapper: So no Mexican judge could ever be involved in a case that involves you?

Trump: No, he’s a member of a society where, you know, very pro-Mexico and that’s fine.  It’s all fine. But I think he should recuse himself.

Trump seems to think that Judge Curiel is somehow different from these other hypothetical judges and his Hispanic supporters in some meaningful way. Trump’s claim seems to be not that Curiel is disqualified simply because of his Mexican heritage but because he is proud of that heritage in some specific way that creates a conflict of interest. Is it because of the society Trump references, both in the Tapper interview and in his statement?

The society in question is the California La Raza Lawyers Association, which advocates on behalf of California’s Hispanic lawyers. PolitiFact rates the claim that it is “very pro-Mexico” as “mostly false”. There’s no indication that this lawyers association acts on behalf of any conception of Mexico’s national interests. Trump is not making this claim on the basis of strong evidence. He thinks he’s being treated unfairly and so he’s assuming that the reason he is being treated unfairly is that Judge Curiel hates him because Judge Curiel identifies strongly with Mexico or with Hispanics more generally and is consequently necessarily opposed to the wall and to Trump as a person.

Effectively Trump is accusing Curiel of being a racist–of acting against Trump motivated by a hostility toward Trump’s politics that comes from a strong Hispanic identity. Notice how Trump doesn’t have a problem with this per se:

He’s proud of his heritage. I respect him for that.

Trump believes the issue is not that Curiel is Hispanic or that he identifies strongly as a Hispanic, it’s that in Trump’s opinion Curiel is permitting his strong Hispanic identity to bias him as a judge.

That still sounds racist, doesn’t it? Yet it has become quite standard practice among certain practitioners of identity politics to make this same kind of claim about white judges. When a black person is given a heavy sentence or a white police officer is let off easily for killing a black citizen, there are some people who accuse the judge of racial bias. Their argument is that the judge is biased against the black citizen because of the judge’s whiteness, and for this reason they call for judicial diversity–they want judges and police officers to be racially reflective of the communities they police and preside over.

These people would not claim that all white judges are necessarily always unfair to black people, but when they see a white judge acting in a way that they consider unfair, they assume that the judge acts unfairly because of his race or more specifically because of his strong racial identity.

This presumption that people’s racial identity takes precedence can be heavily normalized to the point at which it’s just taken for granted. Consider the internment of Japanese-Americans during World War II–it was just assumed that because Japanese-Americans have Japanese ancestry that they must have a strong Japanese identity, that this necessarily creates a conflict of interest with their American identity, and that they are therefore untrustworthy. There was no evidence for this and Japanese-Americans were never evaluated individually. Racial group membership was considered sufficient evidence for identity. 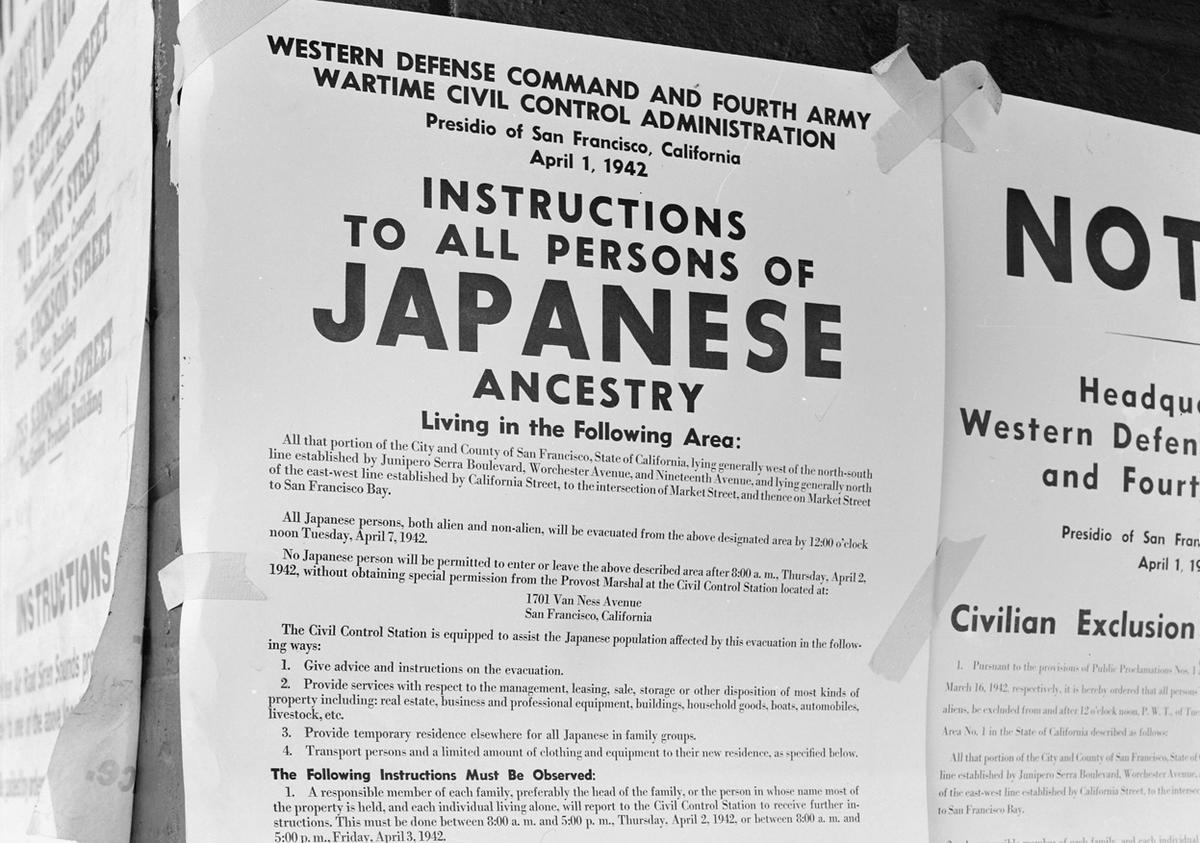 The mistake we made in interning the Japanese is now being made by practitioners of identity politics across the political spectrum in the United States and elsewhere. We are seeing our politics reduced to questions of identity, where it is assumed that people give priority to certain identities (often their race, but it could also be their gender, orientation, ethnicity, religion, etc.) and that these identities determine their political behavior. It is becoming normal for us to dismiss the views and opinions of people on the basis of identity and to flippantly accuse people of bias against us on that basis. In this respect our entire political discourse is becoming fundamentally more racist–we are treating people less and less as individuals and more and more as generic representations of various stereotypes of their identity groupings. If Donald Trump says something you don’t like, it’s because he’s a white man. If Judge Curiel says something you don’t like, it’s because he’s Hispanic. If that Japanese-American looks at you funny, it’s because he’s secretly loyal to Emperor Hirohito. We aren’t engaging with individuals, we’re engaging with straw man racist tropes of our political opponents so we don’t have to deal with their ideas. When we do this we don’t think of ourselves as racist, but that’s precisely what we are.

Donald Trump is singled out as if he were the only person doing this, but Trump’s racism is little more than the vaunted anti-racism of contemporary identity politics reflected back at itself. He is encouraging white people to openly strongly identify as white and to dismiss opposition to their ideas and beliefs as a form of anti-white racism. This is more or less what the anti-racist movement has been doing–encouraging blacks and Hispanics to identify more strongly as black or Hispanic and to dismiss opposition as racism.

Anti-racist racism has been a key tool for Clinton supporters, first against Bernie Sanders and now against Donald Trump. Hillary Clinton herself has openly argued that she would make a good president because of her identity as a woman, and those men who disagree are dismissed on the grounds that they must be disagreeing because they are men and as men they must have a strong male identity that causes them to defend male interests and argue against Clinton in bad faith. The term “Bernie Bro” was flung around for precisely this purpose–to dismiss criticism of Clinton from the left as concealed misogyny. The same thing is being done to Trump. He is being accused of racism and sexism, and quite a bit of it is deserved, but many of these accusations are themselves grounded in the very same racist and sexist paradigm. You are from group X, therefore you must identify strongly with group X, and your actions are attributable to your identity, therefore your actions are attributable to your membership in group X.

This argument can be used to accuse anyone of being a racist or a sexist, but what is missed is that this argument is itself completely racist and completely sexist, because to allege that someone must identify with their race in such a way that their racial identity motivates their action is not only false, it is to reduce people to racial stereotypes. It diminishes all of us and reduces all of us to racist caricatures. Both Trump and Clinton are guilty of this, and we are effectively being asked to choose between two different faces of racism.

The fuel that both Trump and Clinton are dumping on this fire has the potential to lead to a significant amount of racial violence. But it has also succeeded in distracting the vast majority of Americans from the interests they share in common–in a distribution of resources and opportunities that is fairer and gives all Americans a genuine chance to have happy, meaningful lives. Bernie Sanders has made his stand campaigning on a broad, solidaristic platform that emphasizes the shared economic interests of people from diverse backgrounds. But that platform has been drowned out by those who would prevent poor whites and poor blacks from cooperating by pitting them against each other along racial lines.

So is Donald Trump being racist? Yes–but not uniquely so, and not in a profoundly new way. He thinks his racism will get him somewhere for the same reason Clinton thinks it will get her somewhere to claim that her gender is in itself a qualification–because both candidates are treating politics as a game of identity, because they’ve learned from the primaries that most voters are extremely responsive to this kind of politics. If we don’t want our elections reduced to accusations of racism and sexism, we have to stop buying the racist and sexist premises that the most important thing about each of us as individuals is our race or our sex. We have to stop identifying so strongly that our identity influences our action, and we have to stop assuming without strong evidence that others identify strongly in that way. Until we do that, we can and will be divided up with regularity by opportunistic con men and con women who don’t care about us, who use us as means to their own ends.