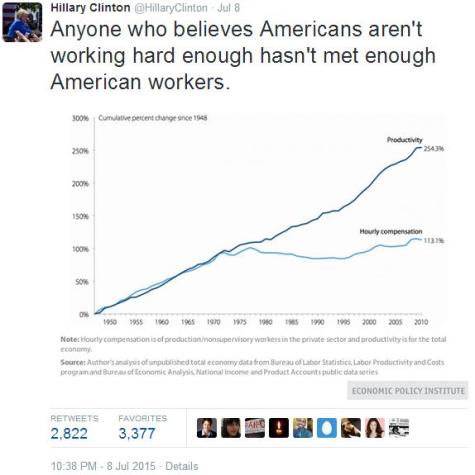 What’s really going on here? Who is right?

To start, Bush’s position is significantly more nuanced than Clinton would have us believe. Here’s the full Bush quote with context:

BUSH: My aspiration for the country and I believe we can achieve it, is 4% growth as far as the eye can see. Which means we have to be a lot more productive, workforce participation has to rise from its all-time modern lows. It means that people need to work longer hours and, through their productivity, gain more income for their families. That’s the only way we’re going to get out of this rut that we’re in.

QUESTION: To keep us from taking it out of context, what you meant to say — when you say more hours you mean full-time work.

BUSH: Given the opportunity to work. Yeah, absolutely.

QUESTION: Not that a full-time guy or somebody working two jobs needs to be working even more time.

BUSH: Absolutely not. Their incomes need to grow. It’s not going to grow in an environment where the costs of doing business are so extraordinarily high here. Healthcare costs are rising. In many places the cost of doing business is extraordinarily high, and the net result of that is that business start up rates are at an all-time low. Work-force participation rates are low. If anyone is celebrating this anemic recovery, then they are totally out of touch. The simple fact is people are really struggling. So giving people a chance to work longer hours has got to be part of the answer. If not, you are going to see people lose hope. And that’s where we are today.

There are 6.5 million part time workers in the United States who would like to have full time jobs:

The increase is due to the global economic crisis of 2008–these figures have been slowly declining since shortly after Obama took office, but there are still a couple million more of these workers than there were in 2005. The labor force participation rate remains deeply depressed:

Today’s labor force is no larger as a percent of the population than the labor force in 1976. In the 70’s, many women did not work at all:

This is why even though the female rate has risen from around 40% in 1970 to around 55% today, the overall rate is now only up a couple points from the 70’s. There’s still a significant gender gap of about 15 points between the male and female participation rates.

When you think about it, this all makes sense–there is a limit to the number of workers an economy will employ at any given time. Some people assumed that the increase in women working would produce higher economic growth rates and create more jobs, but this has not been the case. Instead, what has happened is that increased competition for jobs has contributed to stagnant wages, even as each individual worker’s productivity has increased. This is where Clinton’s chart comes in:

Wages have remained more or less the same since the 1970’s even as our economy becomes drastically more productive. Bush and Clinton are each pointing out two different negative consequences of this. On the one hand, stiff competition for jobs has forced many people into underemployment, preventing our society from getting the most out of them and preventing them from making a living. On the other hand, those who have remained in full time employment have diminished negotiation power, and that means they can be made to work longer hours for the same hourly pay. Since the 70’s, the number of people working in excess of 50 hours a week has increased for both genders in nearly every income bracket (aside from low income males):

This is not only unpleasant, it’s bad for economic performance. Countries with longer work hours are less productive:

This also creates a serious threat to the stability of our economy. Think about it–to sustain economic growth, we need to increase the supply of goods and services. We cannot increase this supply if there is no corresponding demand. Someone has to buy these new goods and services, or the businesses that provide them will have no reason to grow. This means that we need the amount of consumer activity in the economy to grow every year. If inflation-adjusted wages do not rise, how are consumers supposed to increase their consumer activity?

Stagnant wages force the economy to replace wage increases with increased borrowing. Without wage hikes, people struggle to repay these loans, and this makes the economy very vulnerable to credit bubbles, like the housing bubble that precipitated the economic crisis of 2008. You can see it in the figures–starting in the 80’s, household debt consistently and rapidly rises, especially in the years immediately preceding the housing crisis:

The introduction of larger numbers of women into the workforce did not have to have these consequences. A prudent government could have recognized that more working women would diminish the bargaining power of workers and enacted policies that would have protected workers, maintaining wage increases in line with productivity. It could have kept minimum wage laws strong, protected union rights, avoiding subjecting American workers to submarine free trade, and so on. But instead, the opposite happened. The inflation adjusted minimum wage is actually smaller today than it was in the 60’s and 70’s:

As a percent of the workforce, fewer workers are union members today than at any point since the 1930’s:

Bush and Clinton each recognize the symptoms of this problem, but past Bush and Clinton presidential administrations have not done anything to solve it. They have not only failed to enact policies that would protect workers, they have actively sought to further weaken worker bargaining power. They see the symptoms, but they don’t understand the disease. The most objectionable part of Bush’s statement is not “people need to work longer hours”, it’s this bit:

It’s not going to grow in an environment where the costs of doing business are so extraordinarily high here.

Inflation-adjusted wages have not risen in this country since the 1970’s. Labor costs in this country have been very favorable for business for decades. This hasn’t produced income growth for workers because businesses have no incentive to expand supply unless workers have the funds to buy goods and services. Instead of raising wages, the Bush and Clinton administrations of the past encouraged workers to borrow unsustainably large amount of money and created the very symptoms they rail against in their campaign speeches. Why should the American people trust either one of them to fix the problems their husbands, brothers, and fathers created?

If you want more on Bush and Clinton, I have stuff for you:

Also, my good friend Mike Perino has decided to start his own blog and has written his own piece on this topic. We don’t always agree, but he’s a smart guy and he defends his views skillfully. If you’re interested in checking him out, you can read this piece at this link.