Bobby Jindal has decided to run for president, so let’s do another candidate evaluation. I’ll be evaluating Jindal’s background, policy history, and explicit statements to determine whether or not he would make a good president. I won’t be paying attention to electability or likeability, as is often common elsewhere on the web.

If you love candidate evaluations, we’ve got more of them:

This is Bobby Jindal:

Jindal has a BA from Brown dual-majoring in biology and public policy. He did a master’s degree in political science at Oxford, and turned down an offer to do a doctorate there. This makes him the only 2016 candidate with a graduate degree in a major social science field. He converted to Christianity in high school. In 1996, he was appointed Secretary of the Louisiana Department of Health, where he eliminated the state’s medicaid deficit. In 2001, President Bush appointed him Assistant Secretary of Health and Human Services for Planning and Evaluation. He served for two years before resigning to run for governor of Louisiana in 2003. He lost to Kathleen Babineaux by a narrow margin. He was elected to the House of Representatives in 2004 and reelected in 2006. Both times, he won by immense margins. In 2007, he tried for governor again, and this time he won easily. He was reelected in 2011 by an even larger margin. At the time of writing, he is still the sitting governor of Louisiana.

Jindal is the second candidate to have served both in congress and as a governor (the other is Lincoln Chafee). This means we can look both at his voting record and his record as governor.

Jindal as a Congressman

In congress, Jindal had a very right wing voting record:

He hasn’t changed his stripes on Iraq–in 2015, Jindal said:

President Bush made absolutely the right decision. Let’s remember, the world is a better place without Saddam Hussein.

Tell that to the Iraqis hiding from ISIS.

Let’s start by looking at Louisiana’s economic performance. Here’s Louisiana’s per capita income under Jindal in comparison with the national average:

In 2008, Louisiana’s per capita income was 92.6% of the average. In 2013, it had slid back just a tad to 92.1%. Suffice it to say, Jindal has not achieved an economic miracle. Louisiana also has the second highest poverty rate in the country. 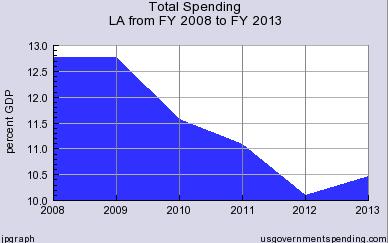 The cut is more than two points of GDP in total, with two years in which Jindal cut spending by more than 1 GDP point. Based on the IMF data, this certainly cost Louisiana significant amounts of economic growth.

Jindal savaged education, cutting Louisiana’s university system by $700 million, a 34% reduction. This is the largest post-recession higher education funding cut of any state. Meanwhile, Louisiana in-state tuition has rose 66% under Jindal. All told, the current data indicates that Jindal has reduced education spending in Louisiana by at least 18% as a share of GDP:

But you know what’s really disturbing about all of this? When Jindal became governor in 2008, Louisiana had a $1 billion surplus. Today it has a $1.6 billion deficit. How did this happen? Instead of using stimulus spending to boost the Louisiana economy during the 2008 crisis, Jindal responded with the largest tax cut in state history. The cuts overwhelmingly targeted those at the top of the distribution. In an economy depressed by sluggish demand, firms have little reason to spend any additional money they receive from investors. If there’s no demand for new products, there’s no reason to expand capacity. So the money sits idly and does the economy no substantive good.

Louisiana needs to reverse course, but because Jindal has presidential ambitions and has signed Grover Norquist’s infamous anti-tax pledge, he has vowed to block all tax increases.

None of this has stopped the Cato Institute from heaping praise on Jindal, but we should not be surprised–Cato (formerly known as the Charles Koch Institute) is infamous for only caring about tax cuts for the rich. Cato doesn’t care that Louisiana’s budget is a blasted ruin, or that its public services are crashing and burning.

I’ve looked at a lot of candidates who were governors. Jindal has the worst record, without a doubt.

Jindal has also taken a few other positions in recent years, all of them pretty abysmal:

Bobby Jindal is a miserable governor and he’d make a miserable president. I can find no redeeming features. He’s one of the worst candidates I’ve looked at. He practically spent the last 7 years raiding the Louisiana treasury and handing all the money to his rich friends while the state burned.