Lindsey Graham is running for president, so it’s time for another candidate evaluation. I’ll be evaluating Graham’s background, policy history, and explicit statements to determine whether or not he would make a good president. I won’t be paying attention to electability or likeability, as is often common elsewhere on the web.

If you’re a fan of this series, here are all the previous entries:

This is Lindsey Graham:

Graham has a BA in psychology and a law degree from the University of South Carolina. He is not unique in this respect–a majority of the declared candidates have been lawyers. He is the only candidate so far with significant military experience. He served in the air force during the 1980s and continued to be a member of the reserves until this year. He was elected to the South Carolina state legislature in 1992, jumped to congress in 1994, and moved up to the senate in 2002. He was targeted for ouster by the Tea Party in 2014, but ended up prevailing easily.

Graham has been in congress a long time, and this gives him an extensive voting record to evaluate.  As republicans go, Graham is considered something of a moderate. Does he deserve this designation? Here are Graham’s moderate credentials:

There’s a little bit here, but not all that much. Graham’s rhetoric on global warming and immigration is more conciliatory than nearly all the other republican candidates so far, but his voting record on these issues tells a different tale.

Then there’s this stuff:

On these issues, he is every bit as misguided as the Tea Party republicans he so often tries to distance himself from. We cannot have a president who doesn’t understand how stimulus and austerity work, who has no concern whatsoever for economic inequality and the role it plays in destabilizing the global economy by forcing more Americans to finance their consumption with borrowing. We should be every bit as disturbed by these positions when Graham espouses them as we are when Ted Cruz does.

But this is just the tip of the iceberg–there’s one issue where Graham is not merely just as bad as other republican candidates, he’s significantly worse. Graham is a naive hawk on foreign policy. Military force is his answer to every foreign policy question. I’m not exaggerating. Here’s how Graham has responded to a wide assortment of international crises over the years:

Graham voted for the Iraq War. At the time, Graham was asked how long he expected US forces to remain in Iraq. He said:

Perhaps a year or more. If we’re there through 2009, something went wrong.

A month ago, he was asked in an interview if he thought the war was a mistake given what we know now. Here’s his response:

He then proceeded to make an argument he has made many times before. The structure of this argument looks something like this:

1. If we don’t continue to fight a war in Iraq, this will expose America to vague risks:

There no way to win the war without some of us being over there doing the fighting so they don’t hit us here at home.

2. The war in Iraq can be won if we stay long enough:

Leaving Iraq too soon, not leaving a residual force has resulted in what you see today

3.  Therefore, those who try to leave Iraq are causing us to lose unnecessarily and exposing us to risks:

I blame President Obama for the mess in Iraq and Syria, not President Bush.

4. Therefore, the appropriate course of action is to put more troops back into Iraq:

I think the 10,000 troops will allow us to train the Iraqi army at a faster pace and give them the capability they don’t have.

He is wrong on all of these counts. The risk of terrorism has always been overstated: 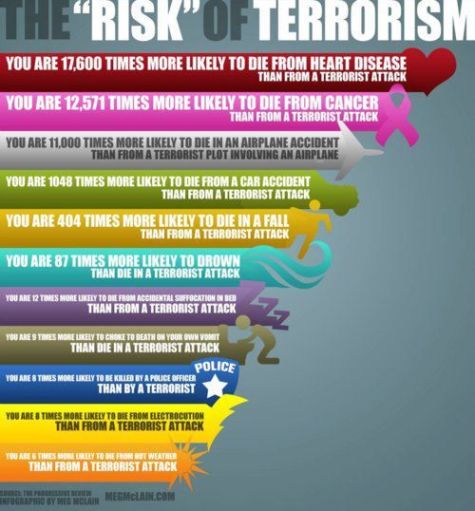 Even if we were to suffer a major terrorist attack every year in which 3,000 Americans were killed at random, you would still be more than 10 times more likely to die in a car crash and almost five times more likely to die in an ordinary homicide. We’ve spent trillions of dollars attempting to eliminate a relatively minor risk, and these dollars have achieved nothing because the war cannot be won if we stay long enough. Iraq is an intensely divided society. It suffers from ethnic and religious tensions and has a long history in which the dominant ethnic or religious group systematically exploits the weaker groups. All democracy has done in Iraq is change the dominant group from the Sunnis (a minority faction) to the Shiites (the majority faction). The Iraqi government systematically marginalizes the Sunnis, and this causes Sunnis to rebel and join organizations like ISIS. There are only three ways to deal with this kind of factional conflict:

Graham doesn’t understand this. He thinks a few more years of occupation will cause Iraq to turn some magic corner. This is not how people work. Until a country embraces tolerance as a value of its own accord, all that can follow is violence and misery. Either a foreign power or dictator uses violence to keep the peace, or the various groups use violence in an attempt to dominate one another. No matter how long we leave troops in Iraq, as soon as they leave they will create a power vacuum that will inevitably be filled by new forms of oppression and violence. To think otherwise is naive in the extreme.

In Syria, Graham has taken the same view–he fears that the country will become a failed state and wants the US to militarily intervene to prevent this:

It’s the same kind of situation as Iraq. Assad uses oppression and violence to maintain stability in Syria. If we throw Assad out, we either have to spend trillions running the country ourselves indefinitely while fighting against insurgents and guerrilla forces or we have to allow the various Syrian rebel factions to fight it out amongst themselves, producing the failed state scenario that Graham fears. The strongest Syrian rebel factions are also the most radical factions, and weapons we hand to the moderates tend to be seized by the radicals, who are better trained and more competent.

Again, Graham wanted to depose the dictator, giving no thought to what would follow:

Go to Tripoli, start bombing Gadhafi’s inner circle, their compounds, their military headquarters in Tripoli. I think the focus should now be to cut the head of the snake off. That’s the quickest way to end this…Make sure that Gadhafi forces lose on the battlefield. Better equip the Libyan rebels. Have more air power coming to their aid so they begin to win on the battlefield.

And of course, the same thing has happened–there was a massive power vacuum and Libya has totally unraveled.

Graham has consistently pushed for military action against Iran. Here he is in 2010:

I’m trying to make a case for logical policy decisions. First, you make the argument containment is not a good idea. Then weeks or months pass. If the Iranians are still moving toward a nuclear capability then the next logical step would be to say, ‘Mr. President, here is force authorization.’

He still holds the same position in 2015. Graham grossly exaggerates the threat of a nuclear Iran:

The nature and the quality of the deal will shape world events more than any single event that I can think of. This is the most consequential decision that any administration, world organization, group of nations, will make in my lifetime.

His argument rests on the bizarre assumption that the Iranian regime is insane and would rather use nuclear weapons against Israel or the United States than maintain its own survival. Mutually assured destruction prevents even terrible regimes from voluntarily launching nuclear wars. Even Kim Jong-un knows better than to attempt to use his nuclear weapons offensively against the United States and its allies–North Korea has had a significant nuclear capability for years, and that capability will only continue to grow.

I don’t know how this will end if you give [Ukraine] defensive capability, but I know this: I will feel better because when my nation was needed to stand up to the garbage and to stand by freedom I stood by freedom.

Here Graham nakedly admits what has become the norm for him–he doesn’t think about the long-term consequences of his foreign policy positions. He reacts viscerally and emotionally to whatever is in front of him without subjecting his intuitions to analytical scrutiny.

Graham assumes that if we make Russia’s military action in Ukraine costly, this will cause Russia to withdraw. This is a fatal misunderstanding of the Russian mindset–as I’ve written in the past, the Russians consider Ukraine a core strategic interest and will endure intense suffering, both economic and military, to prevent its defection to the west. If we arm Ukraine, the Russians will still prevail anyway and the conflict will only be bloodier and more horrible. The only way to stop the Russians in Ukraine is to start a war with them, and a war with a major nuclear power would be a terribly risky and costly. Surely even Graham knows that.

Lindsey Graham’s moderate credentials don’t withstand scrutiny and his foreign policy positions are naive and ham-fisted. He should not be president, though it should be pointed out that Hillary Clinton also supported all of the military interventions that Graham backed (aside from possibly Iran–her public statements have been with the administration, but there are an array of hints that she might hold Graham’s view behind closed doors). He should not be president, and on foreign policy, Graham is the worst choice. Sadly, there are few good ones.