What the Midterms Tell Us About How to Oppose Trump

The Midwest is increasingly the critical region in American politics. It is the only region in which large numbers of states flipped from Obama to Trump in 2016, and in the 2018 Midterms the Midwest was once again the site of many of the most interesting results. For me, this region includes Minnesota, Wisconsin, Iowa, Illinois, Michigan, Indiana, Ohio, and Pennsylvania. I don’t include agricultural red states like the Dakotas or Missouri, which have voted Republican in every presidential election since 1996.

Despite their shift toward Trump in 2016, many of these Midwestern states demonstrated a willingness to support Democrats in 2018. In the Senate, Minnesota, Wisconsin, Michigan, Ohio, and Pennsylvania, Democrats held the line against Republican challengers, losing only in Indiana. In governor races, Democrats retained Minnesota and Pennsylvania, and took Wisconsin, Illinois, and Michigan from the Republicans. The Republicans were able to defend their hold on Iowa and Ohio.

In much of the writing about the midterms, the focus has been on Democratic successes in the Southwest. Observers praise Beto O’Rourke for nearly beating Ted Cruz in Texas and are excited about the Democrats’ performance in the Arizona and Nevada Senate races. But I think this emphasis is a mistake. We are repeating the errors of the Clinton campaign–trying to compete nationally by demographically changing the South instead of creating messages that can win in the Midwest.

In 2016, Trump out-campaigned Clinton in nearly every Midwestern state, spending more time in each state and in the region as a whole:

Wisconsin is often cited as a particularly egregious case–Trump spent a full work week in Wisconsin, while Clinton never touched down in the state even once. It joined Michigan, Ohio, Iowa, and Pennsylvania in defecting away from the Democrats. Of the Midwestern states the two candidates visited, only Minnesota was retained by the Democrats in 2016.

The press was so self-assured about a Clinton victory that it engaged in idle fantasies of winning Southern states like Arizona or Georgia. At one point The Washington Post even spoke of competing in Texas. The theory is that as southern states become more urban and more Hispanic, they will become more winnable for Democrats, enabling them to abandon the so-called “deplorables” in the Midwest. They’re hoping these southern states will become like New Mexico, which has gone for Democratic presidential candidates in every race since 2008. It’s a flawed strategy, for two reasons:

The trouble is that the Midwest cannot be won consistently at the presidential level unless Democrats are willing to allow for more diversity of messaging within the party. Bernie Sanders won Michigan, Indiana, Wisconsin, and Minnesota and came very close in Iowa and Illinois. The left tends to emphasise the role played by Sanders’ big ticket economic proposals, like Medicare-For-All, tuition-free college, and infrastructure spending. But this is just one of causes of his success in the region. The Sanders campaign also took a less antagonistic attitude toward Midwestern values. It didn’t show contempt the way the Clinton campaign did–calling them “deplorables”–but it also drew on a more universalist framing than the Clinton campaign. Sanders frequently talked about what we all ought to be entitled to, as American citizens. Clinton tended to play to specific demographics. She campaigned like she was running for mayor of Chicago–making separate pitches to black voters, Hispanic voters, women voters, LGBTs, and so on. Sanders never especially liked talking to factions and groups–he prefers talking to “the 99%”, to the American mass as a whole. When he tries to talk to specific identity groups, it feels awkward and forced. The politics of heavily diverse urban liberal cities are too much about distinctiveness for Sanders. He wants to talk about what we can all do, together. Clinton likes to talk about what she can do for your group. The Sanders message is a unity message, drawing on the post-war rhetorical style. The Clinton message was made for urban populations which live in tight communities separated by race, sexuality, religion, and so on. 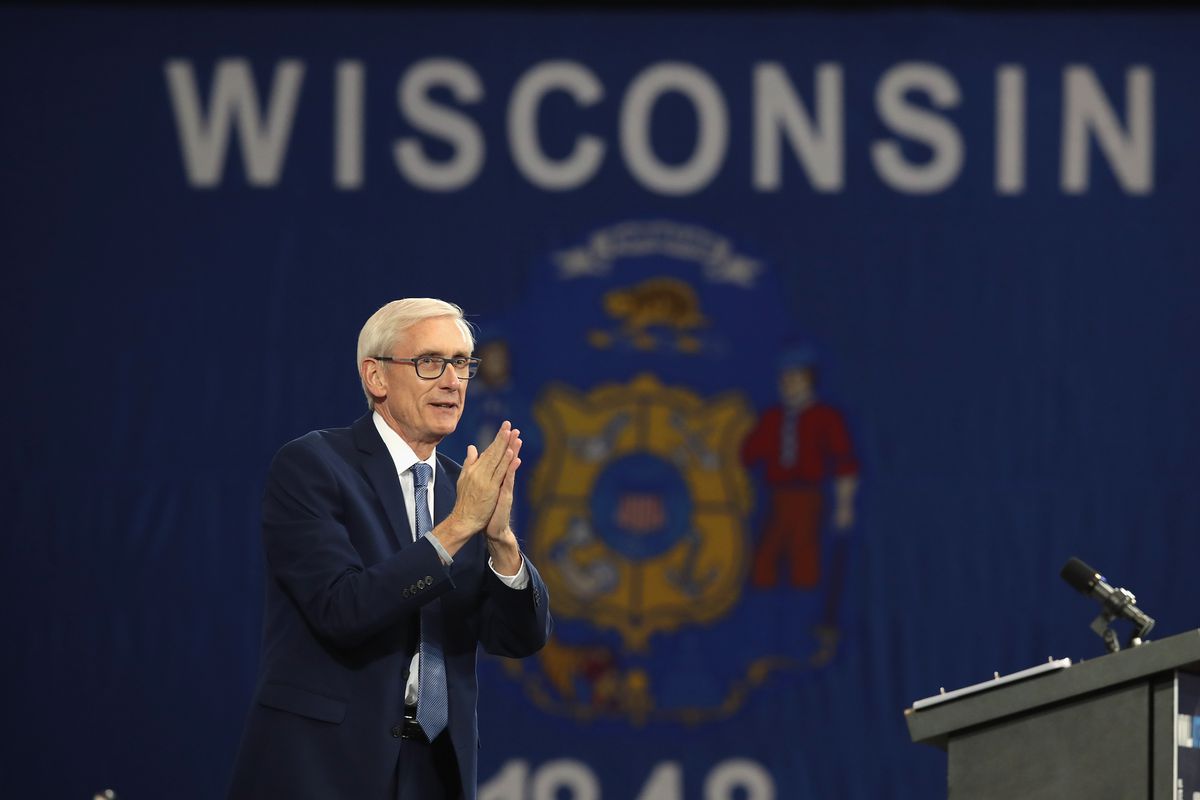 One of the consequences of this is that Midwesterners seem to be especially drawn to white male candidates, like Wisconsin’s new governor (Tony Evers, pictured above). This is because they expect white men to use unifying language and don’t trust candidates from other backgrounds to do so. This wasn’t true 10 years ago. 10 years ago, Barack Obama won every state in the Midwest because he made a specific effort to de-center his race from the campaign. In 2008, you could frame Barack Obama as the “first black president” if you wanted to do so. But Barack Obama wasn’t trying to force everyone to focus on that framing and embrace it, in part because he suspected that if he tried to do that he’d lose people. Instead, Obama tried very hard to frame himself as a unifying force, and in 2008 that worked quite well, producing congressional Democratic supermajorities. Later on Republicans made an effort to make Obama’s presidency about his race to weaken his ability to play the unifier, and many Democrats were happy to help them in this, defending Obama specifically as an agent or representative of blackness. In the 2008-2010 period, the focus was on Obama’s economic agenda, especially the stimulus and Obamacare. Beginning in 2010, we were debating whether Obama’s opponents were racist, how racist they were, and what kind of conversation about race we ought to be having. During the Clinton campaign this was augmented by a similar conversation about gender. All of these things have made female candidates and candidates of color less competitive in the Midwest than they were a decade ago.

This is what Bernie Sanders was getting at the other day when he said:

You know there are a lot of white folks out there who are not necessarily racist who felt uncomfortable for the first time in their lives about whether or not they wanted to vote for an African-American.

These white folks are looking for the unity message of 2008 Barack Obama, but they increasingly feel that African-American candidates are no longer willing or able to campaign that way. This has become something few are willing to talk about. Many on the left immediately accused Sanders of excusing racism. In the meantime, there are large movements in the Democratic Party which insist that the next nominee needs to be a woman or needs to be Beto O’Rourke. Both of these responses double down on the post-2010 discursive shift which has cost Democrats so much in the Midwest.

And because there are millions of liberal Americans living in coastal cities who genuinely like the distinctiveness framing, it’s easy for the liberal and left-wing political class to fool itself into thinking this is a strategy which can succeed nationally. After all, they themselves live in the cities where this kind of politics dominates. They are the sort of people it flatters.

It’s fine to do this in the coastal cities and reliable blue states. But the Democrats need to be able to accommodate a different approach in the Midwest. Right now, the Democrats who are competitive in Midwestern elections are taking more from the Joe Manchin playbook than Bernie Sanders’. They are simply capitulating to the right on a large percentage of issues in a desperate bid to win elections. Manchin is able to defend his seat, but Manchin is not able to spark realignment. He plays defense, not offense, and the Democrats cannot fix the Republican Party unless they are willing to go on the attack. But for the attack to work, it cannot be a strident, indifferent, imperious attempt to subject the Midwest to coastal values and the coastal discourse. It has to be a form of attack which accommodates the Midwestern political sensibility, that emphasises unity over distinctiveness and focuses on a collective American identity.

And in a presidential election, it means we need to prioritise finding a candidate who can take back the Midwestern states Hillary Clinton lost and deliver sweeping congressional victories in the seats in the middle of the country that so many on the left have written off. That means that the Democratic Party needs someone who knows how to speak the unity language. It doesn’t have to be a white guy–but it needs to be someone who knows how to campaign the way white guys campaign. Any Democrat can deliver New York and California. We need someone who can hold Minnesota, and go get Wisconsin, Michigan, Ohio, and Pennsylvania back. Maybe even Indiana. If we can win those states at the presidential level, we’ll also pick up more seats in congress. Then we can make a genuine effort to realign the country and transform the Republican Party by passing the bold, transformational economic reforms Barack Obama failed to pass. If we’re patient, Arizona, Texas, Florida, and Georgia will come over when they’re good and ready.

In the meantime, you know what definitely won’t work? Idly day-dreaming about passing constitutional amendments to disempower Midwestern senators. Nothing says “You are deplorable scum and I don’t care if you live or die” like silly armchair plots to weaken the power of the states in the middle of the country. The senate is here to stay. Let’s actually try to win it–there’s nothing else to do.