Angela Merkel is Not Fit to Lead the West

Each time there’s an international summit, I see the same articles over and over, arguing that America no longer leads the west–Germany does. It’s understandable why people make this argument–President Trump is rather uninspiring, to put it mildly, and Germany is the last of the major western powers to retain the leader it had before the 2008 financial crisis. Chancellor Merkel has been in power for nearly 12 years. In that time, the United States has had three presidents and Britain has had four prime ministers. Merkel seems to offer stability in a world that’s increasingly off its rocker. But seeming is not being–in truth, there is no western leader who has done more in the last decade to contribute to the political instability that has brought about Trump and Brexit than Angela Merkel.

Merkel was elected in 2005–the same year Tony Blair won again in the UK, a few months before Stephen Harper won in Canada, one year after George W. Bush won re-election in the states, and two years before Nicolas Sarkozy won in France. When she was elected, Silvio Berlusconi ruled in Italy, and Greek politics was still dominated by Karamanlises and Papandreous. This is the generation of western leaders which failed to anticipate the 2008 crisis and whose mismanagement of the fallout led us to Trump, Brexit, and years of misery in countries like Spain, Portugal, Italy, and Greece.

Merkel is now the last prominent western leader left from the 00’s. In the multiparty countries, many of these old ruling parties are increasingly irrelevant. Sarkozy’s party couldn’t even make it into the second round of France’s presidential election now. Berlusconi’s party has been knocked out of the top two in Italy. In the countries that still rely heavily on two parties, the old parties have been modified from within. Blair’s party has been commandeered by the Corbynites. Bush’s party now belongs to Trump.

These leaders failed us because they held false beliefs about the way economies sustainably develop. All of them continued the trickle down policies which enriched top income brackets at the expense of the bottom. When ordinary people could not afford to buy the goods and services which drove growth rates, all of these leaders allowed and encouraged their citizens and the citizens of other western countries to borrow large amounts of cash they could never realistically repay.

You can see this in the share of income controlled by the top income rates:

German inequality did not increase by quite as much as did inequality in the Anglosphere. But Germany grew its economy in an exceptionally dangerous way. The German economy depended on exports, especially to countries in the European “periphery”–places like Spain, Portugal, Italy, and Greece. Germany helped itself acquire economic advantages over these countries by stunting its own wage growth and running below-target inflation: 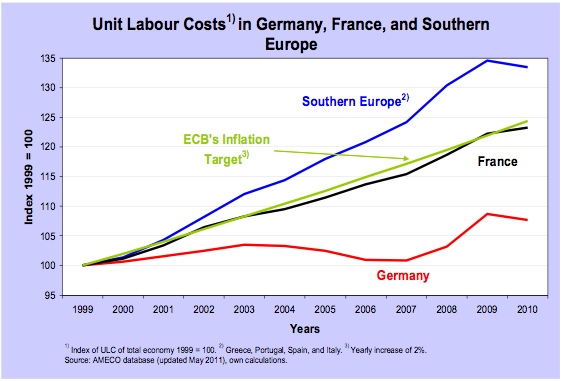 Now to be fair, these policies were not started by Merkel and she is not to blame for them. It was her predecessor, Gerhard Schroeder, who enacted the Hartz IV reforms, which weakened German workers’ ability to secure stable, high-paying jobs (replacing these with large numbers of lower paid, more precarious forms of employment). By the time Merkel took office, there was already a large wage gap with the south. But with southern firms unable to compete, the southern economies constantly needed influxes of cash to continue purchasing German goods. This was accomplished by lending southern governments huge piles of money at low interest rates:

When the 2008 economic crisis hit, the supply of money available for lending to the south dried up, the southern economies collapsed, interest rates on public debt skyrocketed, and the south was left desperate and destitute.

This should have been Merkel’s moment. The economic imbalance between core countries like Germany and peripheral countries like Greece could not continue. German workers needed to be paid more. The southern governments needed debt forgiveness. It was time for Merkel to step up and lead Europe.

What happened? Angela Merkel acted like Donald Trump. Instead of doing what was best for Europe, she and her supporters blamed the victims, scolding the southern countries for borrowing the money the German state had allowed and encouraged its bankers to lend. Germany bent Greece over a barrel and refused to give it the relief it needed, and German inflation has mostly stayed at or below 2%:

This has made it hard to close the wage gap, limiting the amount of help that has come from the German side. Consequently countries in the south are forced to make their exports more competitive by implementing German-style reforms and by engaging in massive austerity policies. These policies shred the wages and incomes of Spanish, Portuguese, Italian, and Greek workers, driving up unemployment. Even today, Greek unemployment is over 21%, Spain’s is over 18%, Italy’s is over 11%, and Portugal’s is over 10%. The slow growth in the south has reduced the amount of economic activity throughout Europe and slowed economic growth in northern countries like Germany, Britain, and France. It doesn’t do Europe’s trading partners any favors either.

Faced with clunky growth rates, westerners have been upset and disappointed with their circumstances. They have been looking for an explanation, or better yet, a solution. The right nationalists have found their scapegoats–immigrants, refugees, and the EU. Traditional right wing European politicians have been unable to effectively oppose these narratives because the public’s alternative is to blame the economic policies which their leaders and parties have championed for decades. So they routinely allow themselves to become accessories to the nationalists. This is why David Cameron held the Brexit referendum and why Theresa May is determined to implement “hard” Brexit, and it’s why so many French politicians (not just Le Pen, but traditional center-right figures like Sarkozy and Fillon) have become so explicitly Islamophobic.

Merkel is let off the hook by Anglophone commentators because she generally avoids doing this. She took the refugees, she says Islam is not the problem. But she is the problem. She’s the one who has for twelve years perpetuated economic arrangements in Europe which create stagnation and pit different sections of the working class against each other. She’s the one who has run the EU so unfairly that many people genuinely believe they will do better economically outside it.

She gets away with it at home because her low wage policies ensure that Germany still retains competitive advantages over other countries, and that means that the German economy is sparred the brunt of the malaise it creates throughout Europe. In a world of miserable growth rates, Germany can still do better than most places by parasitically feeding off the decaying corpses of the economies it’s ruined. The worse Merkel makes things in the south, the better she looks to her own people by comparison.

But the German economy is no model for Europe, or the world. Germany has only been able to do as well as it has by having lower labor costs than other countries. If other countries had the same policies Germany had, workers throughout the western world would make less money and have less to spend, and all the western economies would be even worse off. But because Germany continues to persist in offering up its workers to firms on a platter, each European country is put at a significant disadvantage if it does not join in the race to the bottom, and they are all encouraged, every day, to move the world ever closer to that fate. Emmanuel Macron won the French presidency pledging to do precisely this.

We say that Merkel is no nationalist, because she’s pro-EU and nice to refugees, but what could possibly be more nationalist than economically exploiting the countries that are meant to be your partners? Donald Trump wants to build a wall and make Mexico pay. Angela Merkel has built the German industrial base and made Greece pay. We shouldn’t look to her to help us build a better world–she’s part of the world we’d like to leave behind.