Morning Joe and CNN: How Trump Goads the Press Into Playing His Game

When President Trump was running, we talked about how he managed to force the media to give him free airtime by making himself ratings candy. Trump’s outlandish statements may have looked like gaffes, but they played an important role in helping him win, especially during the primaries. Was this deliberate or inadvertent? Either way, it worked. Since becoming president, Trump has continued to do the same kind of stuff–he’s gone after Morning Joe and CNN. This has resulted in a lot of pieces criticizing Trump for acting unpresidential, but relatively little consideration of how this kind of thing plays with Trump’s people. So let’s think about that.

One of the key things to understand about Trump’s popularity is that it is still higher now than it was during the campaign.  This sounds unbelievable, but it’s true. Many people don’t see this because they look exclusively at job approval numbers, which show Trump’s popularity falling significantly since he took office. Look at 538, for instance: 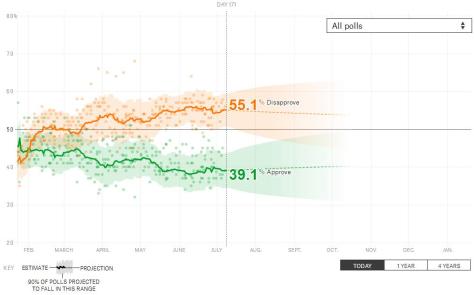 538 shows Trump briefly having a positive net rating at the very start of his presidency, before sliding downward, dropping significantly in March (when the House’s healthcare bill was released and passed through committee, only to face fierce criticism from the CBO and subsequent withdrawal) and then again in May (when the House voted to pass the bill anyway, and also when Trump fired Comey). Today he’s at -16 net. Sounds grim, right?

But the whole story looks different when we look at Trump’s favorability ratings. He’s still significantly more popular than he ever was when he was running for president: 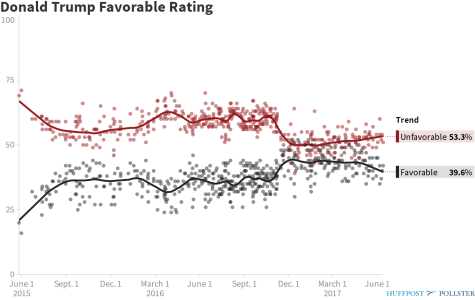 Just before election day, Trump’s favorability net rating was -22. After Trump won the election, it rose to about -6. HuffPo now puts him at about -14, slightly better than where 538 has him. On the HuffPo model, Trump really gets hit starting at the beginning of May, shortly before the House voted to pass the healthcare bill. But none of what’s happened since has been enough to shift him back to the pre-election position–he’s still sitting on a post-election cushion of 6 to 8 points.

Trump didn’t need 50% favorability to beat Clinton. In the month immediately prior to the election, he typically scored in the mid-30s on favorability, a bit worse than his current position. If anything, his numbers would be indicative of a Republican Party that is still slightly stronger now than it was in November.

How does this happen when Trump gets so much bad press? Whether deliberately or inadvertently, Trump has created a cycle of behavior with the press which erodes their strength and adds to his. Trump loves to post stuff that looks like harmless fun to his supporters but which deeply affronts the press. Think about how we talked about a Tweet like this, in which Trump posts a video in which he “punches” CNN:

To Trump supporters, this is silly stuff–it’s a relatively unsophisticated internet meme in which Trump is depicted as a glorious agent who destroys the political establishment and its perceived allies. They don’t read it as a credible attack on press freedom. But CNN isn’t laughing–they took this really seriously. They went and found out the identity of the guy who made the thing and wrote an article about him. It’s unclear whether the accusations of “blackmail” are true, but the article does say this:

CNN is not publishing “HanA**holeSolo’s” name because he is a private citizen who has issued an extensive statement of apology, showed his remorse by saying he has taken down all his offending posts, and because he said he is not going to repeat this ugly behavior on social media again. In addition, he said his statement could serve as an example to others not to do the same.
CNN reserves the right to publish his identity should any of that change.

In their initial post on the subject, CNN used this headline:

They also opened the article with this line:

The network also released an official statement, in which it says:

It is a sad day when the President of the United States encourages violence against reporters. Clearly, Sarah Huckabee Sanders lied when she said the President had never done so. Instead of preparing for his overseas trip, his first meeting with Vladimir Putin, ‎dealing with North Korea and working on his health care bill, he is involved in juvenile behavior far below the dignity of his office. We will keep doing our jobs. He should start doing his.

Trump routinely accuses CNN and the media more broadly of being systematically biased against him, and when he does this they defend themselves by attacking him. All this does is reinforce the antagonistic relationship Trump needs to create–he needs his supporters to see the media as the enemy so that when the media does publish material which hurts the administration, his supporters will disbelieve it.

We saw the same thing happen when Trump went after Morning Joe:

…to Mar-a-Lago 3 nights in a row around New Year's Eve, and insisted on joining me. She was bleeding badly from a face-lift. I said no!

They responded by attacking Trump’s mental state, in an op-ed entitled “Donald Trump is Not Well”:

President Trump launched personal attacks against us Thursday, but our concerns about his unmoored behavior go far beyond the personal. America’s leaders and allies are asking themselves yet again whether this man is fit to be president. We have our doubts, but we are both certain that the man is not mentally equipped to continue watching our show, ‘Morning Joe.’

Once again, Trump portrays a media outlet as his adversaries, and that media outlet responds by doing the sort of things that adversaries would do, playing into Trump’s narrative, reinforcing his trustworthiness among the 30-40% that remain loyal to him, while at the same time damaging their own credibility and the credibility of their future reporting with that demographic. 60% of the country may be absolutely disgusted with Trump’s behavior, but he doesn’t need 60% (or 50%, or 45%, or even 40%) of the country to like him if he’s going to be running against a Democratic Party led by someone like Hillary Clinton.

Could the press handle this differently? Not easily. During the primaries, TV networks felt compelled to invite Trump on and let him call in, because when he was live on their show, he couldn’t be on anybody else’s show at the same time. If Trump was on your show, you had a ratings advantage over everyone else in your time slot.

It works the same way here. When Trump attacks your show or your network, the thing to do to maintain your own credibility and dignity is to ignore it completely, but the thing to do to generate clicks, ratings, and ad revenue is to blow it out of proportion and make a scene. Morning Joe got a huge ratings spike from talking about Trump’s tweets, gaining 70% on its usual ratings. No one show had been hit by Trump that week in that way, so they had a monopoly on the audience that wanted to see their “response”. Economically, it’s very tempting to take that money, even though it makes the show or the network less powerful and less relevant in the long run, ensuring their reach is limited to an increasingly ideologically friendly and homogeneous audience.

It doesn’t help that the emotions of the people working in the media reinforce this. The media is genuinely worried about the way the Trump administration treats them and many people in the media are genuinely worried about press freedom. There’s no hard evidence that the United States has become significantly more dangerous for journalists–Reporters Without Borders’ Press Freedom Index ranked the US 43rd in press freedom for 2017, higher than the 49th it earned in 2015. But there were incidents during the last year which raised journalists’ perception of the threat, even though the overall picture hasn’t changed–the Republican candidate who body-slammed a Guardian reporter and won anyway, the reporter who charged then-Trump campaign manager Corey Lewandowski with misdemeanor battery, and so on.

These incidents have scared the press and made journalists increasingly feel that going after Trump personally in bold and explicit terms is a brave form of resistance. When one of them is attacked or when one of them counter-attacks Trump, many others tend to rally around that person. This helps Trump implicate the entire media, painting them all with the same broad brush.

The most vicious thing about all of this is that the more the journalists try to fight back against Trump’s attacks, whether for the ratings or for personal reasons (or both), the more Trump’s supporters will be inclined to detest the journalists and the larger the risk that some of these supporters will actually intimidate or harm them. Trump supporters make anti-media memes in the first place in part because of the media’s previous reactions to their past behavior. It’s a vicious cycle:

None of this is to suggest that it would be a good thing for the press to refrain from criticizing the president–the press can and should fearlessly and forthrightly report on the administration’s many unpopular and damaging policies. But when this reporting comes from people who have a history of making explicit personal attacks on the president, who have a history of accusing him of being mentally unstable, juvenile, or having tiny hands, the effect is to diminish the seriousness of the policy reporting in the eyes of the people who most need to take it seriously. This is true even if you genuinely think the president is unstable, juvenile, a threat to the press, or whatever–it’s not politically useful for journalists to say this. As we’ve seen over the last two years, the 30-40% of the people who have liked Trump more or less continuously don’t find it convincing. Save it for the opinion pages, and make sure folks can tell the difference. It’s best to stick to the issues, the stuff that hits these people where they live–if we can.

And if we can’t, we need to take a long, hard look at the way we fund reporting. The market imperatives of individual shows and networks seem to increasingly undermine the public role of the press, making it impossible for it to maintain its credibility as an arbitrating institution. If Trump’s people come to live under an iron dome of doubt, there will be nothing the mainstream media can do to puncture it.