Don’t Vote for the Tories: Their Manifesto Can’t Compete With Labour’s

British Prime Minister Theresa May has announced plans for a snap election on 8 June. She’s ahead in the polls (although not as far ahead as she was when I started this series), and the Conservatives may win–they may win by a lot. But they shouldn’t. So I’m continuing a blog series called “Don’t Vote for the Tories.” Each post gives you a new reason to reject the Tories at the polls this June, grounded in research and data. Previously, we’ve looked at some of issues the Conservatives have mishandled, and at the alternative on offer in Labour’s manifesto. Today we’ll be looking at the Conservative manifesto and running their promises directly against Labour’s.

Labour promised an extra £250 billion in infrastructure spending over the next 10 years to resurrect Britain’s once-great rail system and provide everyone in Britain with “ultrafast” internet (over 300 Mbps), with free public wi-fi in city centres and on public transport. The Conservatives make reference to their National Productivity Investment Fund, but this fund only allocated £23 billion and it’s already been created. There are no promises of any new infrastructure spending on top of this: 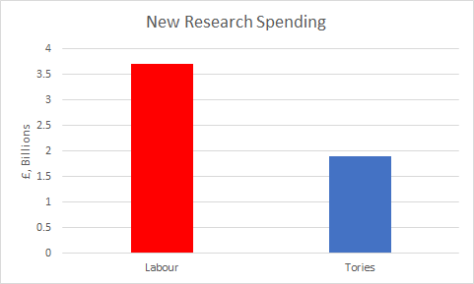 Labour has promised to eliminate university tuition fees and reintroduce traditional maintenance grants. The Tories make no mention of changing tuition fees in any direction. This would leave annual tuition at £9,250 for British and EU nationals attending universities in England. 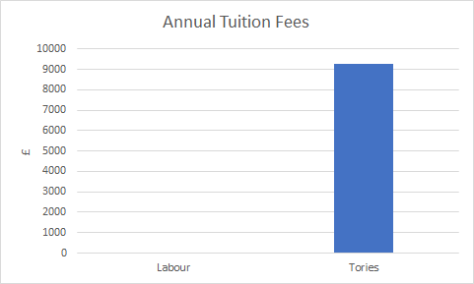 Labour has promised to lift NHS spending by £30 billion over the next five years. The Tories promise a paltry £8 billion. 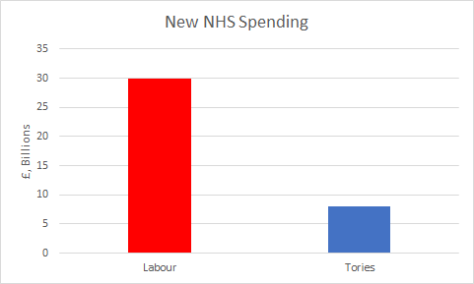 Labour pledges to increase the relative negotiating power of workers by repealing the Tories’ Trade Union Act, increasing the minimum wage to £10 per hour, banning zero hour contracts, requiring firms to pay their interns, double paid paternity leave, and requiring all firms that do business with the government to pay their highest paid executive no more than 20 times what they pay their lowest paid worker.

The Tory manifesto makes no mention of “trade unions”, the “minimum wage”, “zero hour contracts”, “interns”, or “paternity leave”. These words do not appear in the manifesto.  On executive pay, all the Tories promise to do is let shareholders vote on pay and force firms to publish their ratios. 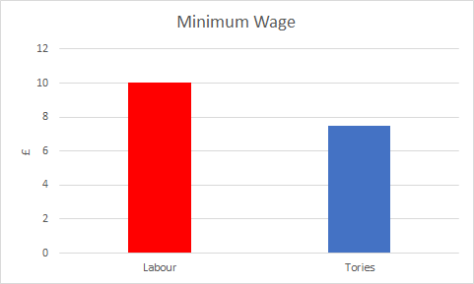 Labour promises to raise tax on only the top 5% of earners, pledging not to raise VAT or national insurance contributions. The Tories promise not to raise VAT and to lower taxes in general. Neither party is very specific about which rates will be changed and to what degree, but we can get some sense of the difference on corporations tax. The Tories have promised to slice corporation tax from 19% to 17%, while Labour promises to lower it for small businesses while hiking it for larger firms. No specific figure is given in the Labour manifesto, but elsewhere Corbyn has claimed he wants it at 26%. Here are how those rates compare internationally:

Labour has also talked about reintroducing the 50% top rate of individual income tax for those earning above £123,000. The Tories have made no pledges regarding the top rate. If they leave it in place, here’s how Britain will likely compare: 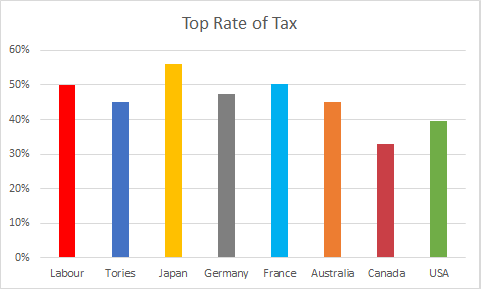 Labour’s offering a bunch of cool new stuff and the price is a modest increase in corporation and top rates of individual income tax, leaving Britain perfectly competitive with other leading western economies. The Tories continue to promise to allow Britain’s public services and infrastructure to slip ever further behind so that they can protect the top 5% of British earners from paying globally normal rates of tax.

It doesn’t have to be this way. Nobody has to vote Conservative.