Don’t Vote for the Tories: They’re Destroying the NHS

British Prime Minister Theresa May has announced plans for a snap election on 8 June. She’s way ahead in the polls, and the Conservatives may win–they may win by a lot. But they shouldn’t. So I’m continuing a blog series called “Don’t Vote for the Tories.” Each post gives you a new reason to reject the Tories at the polls this June, grounded in research and data. I aim to do at least one of these each week until the vote. Today we’re talking about the NHS.

As we discussed last time, the Conservatives have been cutting government spending in a bid to reduce Britain’s debt burden:

But this hasn’t worked–debt has increased anyway, because these cuts have reduced public investment and allowed productivity and wage growth to stagnate, damaging the tax base:

Another consequence of this policy is that the Tories have tried to cap NHS spending at 7% of GDP:

The Tories justify this by pointing to how cheap the NHS used to be in previous decades–in the 80s and 90s, it was just 5% of GDP. The Tories think if it was possible then, it must be possible now–they assume the NHS must be wasting money. What they don’t tell you is that healthcare spending has been increasing throughout the rich countries because of demographic change. People in the rich countries are living longer, and that means higher healthcare expenses as a percent of GDP. So if the share spent on healthcare is held steady or forced down even as the population continues to age, quality of care is necessarily going to decline. The Office for National Statistics projects significant increases in the percent of British people age 65 and over:

Thankfully, because the NHS is spectacularly efficient, even if NHS spending were doubled from 90s levels to 10% of GDP, British healthcare would still be much less expensive than in most rich democracies. The Tories always make it sound like the NHS is bloated and lumbering, but this just isn’t true. France’s public provision for healthcare is already at 9% of GDP. In the United States, the government spends 8.3% of GDP just to cover the old and the poor–the privatized portion of the American healthcare system is so expensive that total healthcare spending in the US (both public and private) is over 17% of GDP.

The British system is not just cheap, it’s efficient–to measure this, I like to take a country’s life expectancy and divide it by its total healthcare spending as a percent of GDP. I call the result a country’s “Healthcare Efficiency Rating” or “HER”. Britain has one of the best ratings–in this chart, single payer systems are in green, hybrid systems are blue, and the heavily privatised American system is in red:

Britain still has a great healthcare system, and it’s already plenty cheap. But instead of  acknowledging the demographic shift and finding money for healthcare like every other country does, the Tories keep trying to cut it anyway. This runs down the service, increasing wait times, lowering quality, and driving doctors and nurses out of the country. Within just a few years of Tory rule, the percent of patients waiting more than 4 hours at the A&E tripled: 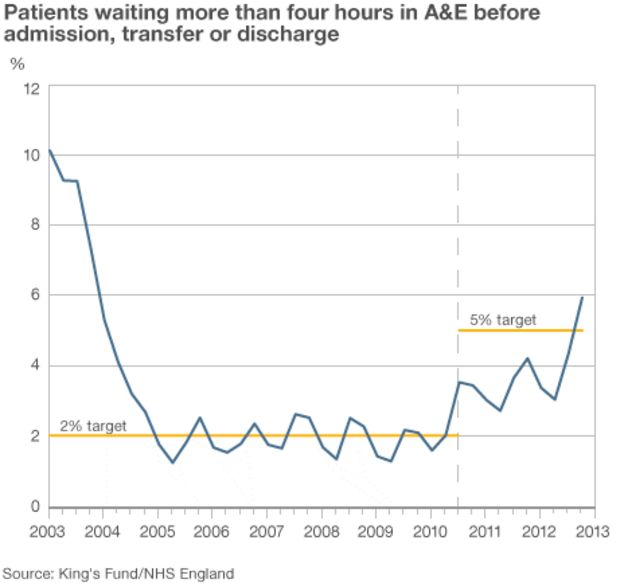 In January, the Tories announced they were dropping the four hour target to save themselves the embarrassment of having to report this figure. Things have only gotten worse–there have been massive increases in the number of people stuck waiting more than 18 weeks for surgery: 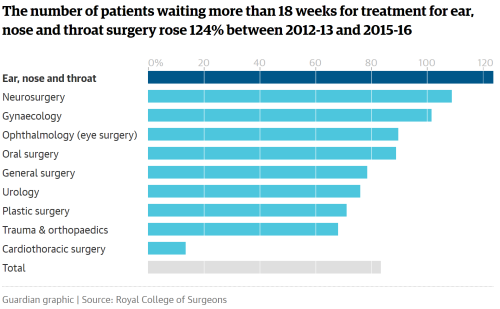 Uncompetitive compensation and working conditions for British doctors, in combination with Brexit, are driving doctors out of Britain and discouraging European doctors from replacing them. Already 7-10% of doctor posts in Britain are vacant:

The same thing is happening with nurses: 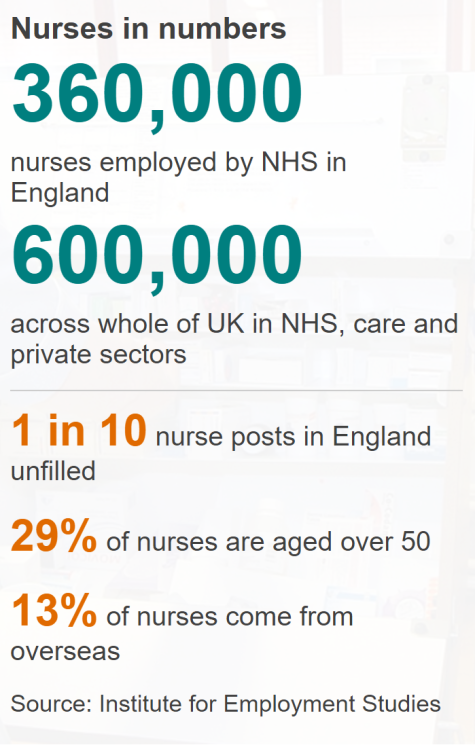 David Cameron said he’s cut the deficit, not the NHS:

They lied, and then when the Brexit referendum came around, the leavers blamed the cuts on foreigners and promised that if Britain voted leave, they’d spend more:

This was another lie:

Why do they lie about the NHS so much? Perhaps they’re hoping to privatise it. If you wanted to privatise the NHS, this is precisely how you’d go about it–you’d use budget cuts to gradually erode the quality of the service, all the while claiming that deterioration was the result of an inefficient state bureaucracy, stubborn public sector unions, and those grubby foreigners. Meanwhile, very quietly, the percentage of Department of Health funds which somehow find their way into private sector hands has more than doubled since the Tories took power. A number of Conservative politicians have been quoted indicating support for full or partial privatisation, including the former Health Secretary, Jeremy Hunt, who went so far as to co-author a book espousing “denationalization”. Of course he has since said he supports the service–just as Cameron said he wouldn’t cut it and the leavers said they’d find £350 million for it. If you’re still believing all this, I have a bridge I’d like to sell you.

The Tories are sabotaging a British national treasure. Vote for someone else who can win in your area.

Subsequent entries in this series: