Don’t Vote for the Tories: They Provide Weak, Unstable Leadership

British Prime Minister Theresa May has announced plans for a snap election on 8 June. She’s way ahead in the polls, and the Conservatives may win–they may win by a lot. But they shouldn’t. So I’m continuing a blog series called “Don’t Vote for the Tories.” Each post gives you a new reason to reject the Tories at the polls this June, grounded in research and data. I aim to do at least one of these each week until the vote. Today we’re talking about political stability.

Theresa May announced her campaign slogan–“strong and stable leadership in the national interest.” No slogan could more poorly describe the way the Tories govern. The Tories regularly create long periods of instability by leaving major policy questions to be decided by referendums. In the last seven years, they’ve done this four times:

The last time a British government held referendums with this level of frequency was the 70s under Wilson and Callaghan–not exactly famous for providing “strong and stable leadership”: 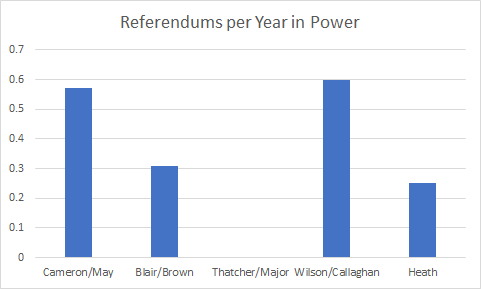 What’s more, many of the referendums held by the Tories have had particularly high stakes–the referendum on electoral reform would have changed British politics forever, making smaller parties significantly more competitive. The Scottish independence referendum nearly broke up the UK. The Brexit referendum has created a prolonged period of uncertainty and instability that will last years. In each of these instances, the Tories could have taken responsibility for government policy–they could have provided strong leadership and made the choices they felt were in the national interest. Instead, they abdicated responsibility and threw these questions at the people, hoping to avoid blame for the outcome.

Each time they held a referendum, the Tories put the British national interest (as they understood it) at risk to protect their own political survival. The Tory leadership claimed they didn’t believe in alternative vote. They didn’t believe in Scottish independence. They didn’t believe in Brexit. But they didn’t want to be held to account for those beliefs, and they thought it was more important to avoid responsibility than it was to govern Britain in accordance with the national interest as they understood it. That is weak, cowardly leadership. Regardless of your position on the individual issues at stake, a strong government takes strong positions and sticks to them. It does not appease those with whom it disagrees by allowing the opposition to circumvent the sovereign parliament and use demagoguery to push vague populist agendas in high stakes referendums. This erodes the power of parliament and debases its sovereignty, weakening the British nation-state in the long-run.

There is nothing the Tories are not willing to gamble to win more votes–they gambled first past the post, they gambled the integrity of the union, they gambled EU membership. No stakes are too high for them. The national interest doesn’t matter to the Tories if it stands in the way of a few votes.

And going forward, their policies are likely to lead to further instability. If the Tories mean what they say about putting a stop to free movement, the border between Northern Ireland and Ireland will have to be sealed–the Irish Republicans won’t like that. If they demand a referendum on union, will the Tories give them that and risk a North Irish exit? If they don’t, will the Good Friday Agreement hold? Will the troubles return?

If the SNP doesn’t like Theresa May’s Brexit deal, will she let them hold another referendum and put the union at risk for a second time in the same decade?

If Spain refuses to agree to May’s Brexit deal unless she cedes Gibraltar, will she give that up too? Will she allow Spain to force her into a worse Brexit deal to keep Gibraltar? Will she risk war with Spain over it?

How much territory will Britain lose because the Tories decided to hold a Brexit referendum instead of providing strong, stable leadership in the national interest? How can anyone who calls themselves a conservative support a weak government which doesn’t respect parliamentary sovereignty and constantly risks turning Britain into a rump state for fleeting political gain?

The Tories have to be stopped before they give up 38% of Britain’s land, 11% of its population, and 10% of its economic output out of a weak, sycophantic desire to be well-liked by voters. To avoid losing votes to UKIP, they have allowed themselves to be co-opted by an English nationalist agenda whose advocates are completely indifferent to the sustainability of the British union (much less the European) so long as their own power and influence within British politics is increased and perpetuated.

The Tories have demonstrated over and over that they are weak and incapable of standing up to any significant political movement which demands a referendum loudly enough over a long enough period of time. Their slogan is ridiculous and absurd–no British government in recent history has more regularly created such profound and lasting instability, or been more willing to disregard its view of the national interest if doing so might win it a few votes. At least the Wilson/Callaghan governments had the dignity to actually believe in the causes they put to referendums. The Tories can’t even do that–for them, the referendum is a tool of accommodation and appeasement. It’s sad and pathetic, and it needs to stop. Vote for someone else who can win in your area.

Subsequent entries in this series: