The French Election: A Grim Situation

In ten days, France is having its presidential election. There’s been some drama since the last time we talked about it–the center-right candidate, Francois Fillon, has been wracked by scandal after it emerged that he paid members of his family for work they never performed. This weakened him, and created an opening for Emmanuel Macron to move into second behind Marine Le Pen. In the meantime, Jean-Luc Melenchon has been making a run in the polls from the left, pulling about even with Fillon for third. Fillon openly advocated for more austerity in France, raising the retirement age, and eliminating the 35-hour workweek, all policies which would not have been great for workers, to put it mildly. But Macron is hardly an inspiring alternative, and I’m less excited about Melenchon than I’d like to be. Here’s why.

The way I see it, there are three key issues in French politics:

Very briefly, I’ll give you my answer to each of these three questions.

At the same time, France’s inflation rate is low, below the traditional 2% target and the 4% target many economists now argue for:

This means that France has room to increase public investment without generating unacceptably high levels of inflation. France also still has a significant amount of fiscal space–less than the US or UK, but much more than Italy or Greece. This means it could safely see its debt-to-GDP ratio increase a bit without experiencing any serious negative side effects:

France doesn’t need to do a bunch of austerity. It’s not experiencing high inflation, so its economy is not at capacity. Public investment is the move.

There’s no question that the EU isn’t working perfectly–because it lacks a federal structure, European economic policy is not carried out by a central government which cares equally about all European citizens. Instead, it is carried out primarily through bilateral negotiations between the strongest, most powerful European state–Germany–and poorer, weaker, debtor countries. German bankers are on the hook for most of the loans the debtor countries want to relief from, so Germany tends to refuse to waive the debts and instead forces these countries to make a choice between the misery of austerity or the chaos and instability of leaving the euro outright.

But leaving the EU is no solution–without a federal European system to impose uniform tax rates and regulations throughout Europe, individual member states will engage in a race to the bottom to attract increasingly mobile transnational corporations. This will undermine left wing economies which expect corporations to pay to maintain the societies they profit from.

So the right course of action is to change the EU to create a set of powerful federal institutions that make collective decisions for the good of the European people rather than any particular nation-state. The status quo is not good enough, but disintegration will make things worse in the long-run. The EU needs comprehensive institutional reform. If France elects a government favorable to this and Germany follows suit this fall, this could be doable.

European countries cannot afford to snub refugees and immigrants–many of these countries have ageing populations drawing increasingly heavily upon their respective pension systems. Refugees and immigrants tend to be young and have many years of productive life ahead of them. And if France invests in their children and gives them a real chance to succeed in society instead of leaving them to fend for themselves in the banlieues, they’re the gift that keeps on giving.

I want a French president who wants to invest, reform, and accept–IRA. But none of the competitive French candidates possess this combination of views.

Le Pen is pro-investment, but she wants to bail on the EU and is deeply hostile to refugees and the Muslim minority more generally.

Fillon is pro-austerity, his proposed EU reforms would weaken independent federal power rather than strengthen it, and he’s also harsh on immigrants and Muslims.

Macron is pro-austerity, but does have some good ideas for EU reform and is reasonably friendly to immigrants (though his proposed budget cuts will make it more difficult to integrate them).

Melenchon is pro-investment, but Euroskeptic–his reform package consists primarily of policy ultimatums he expects the EU to reject rather than meaningful institutional reforms. He’s been wishy washy on immigration.

Hamon is pro-investment (indeed, he even backs a universal basic income), supports federalization, and sticks up for immigrants. But he’s not competitive, currently polling at a distant fifth: 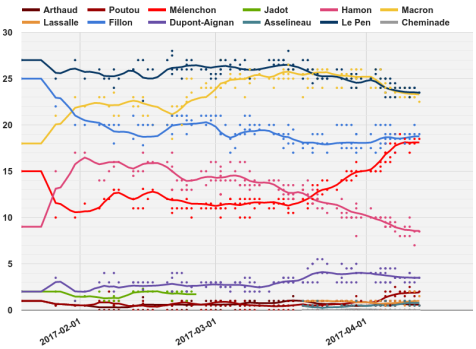 Hamon’s policy platform is strong, but he can’t win. With less than two weeks to go, it’s overwhelmingly likely that whichever two candidates make it to the second round, both will have major flaws. It’s a depressing picture. So, who to choose?

Le Pen’s promises to invest count for little, because she would destroy the EU institutions which in the long-run are the only way to protect Europe from a race to the bottom. The rest of her policies at minimum misunderstand the contribution immigrants make to Europe, and at worst may be grounded to some degree in racist sentiments. She’s not okay.

Fillion is wrong across the board. On some issues he’s worse than Le Pen, though on others she’s much worse than him. In any case, he’s out.

So it’s Macron or Melenchon–the former with a bad economic plan but semi-reasonable foreign and social policies, and the latter with some compelling near-term economic policies but foreign and social policy stances that range from vague to counterproductive. With Macron, you get bad economic policies now with some possibility of improvement later. With Melenchon, you probably take the EU apart and end up with bad economic policies later once the race to the bottom kicks in. A strategic voter would pick one of them rather than Le Pen or Fillon, both of whom are sure to be worse. But if you’re French and you want to stay home or throw-in for Hamon, I don’t blame you.