Last week we talked about British Labour Party leader Jeremy Corbyn’s cunning plan to allow Brexit to go forward in the hope that he and his party might take power in 2020 or 2025 and use restored national powers to move Britain sharply to the left. It’s politically tempting for some on the left to return to the nation state–many working class people in many countries want to see tighter controls on immigration and a renewed emphasis on national sovereignty, and if the left triangulates on these issues it might make itself more competitive with these voters in the short term. Some on the left now believe that international institutions are irredeemably neoliberal, that there’s no prospect of regional or global cooperation to restore the tougher tax, wage, and regulatory policies of the post-war era. Right nationalists are doing well, and the fight between nationalists and internationalists seems to be one the internationalists are likely to lose. So why chain ourselves to creaking neoliberal institutions like the European Union? Surely this is an albatross the left can do without, right? This all may sound plausible, but it’s a big mistake.

There are four key reasons why the left really cannot bend on immigration, the EU, and international institutional integration more broadly:

Let’s discuss each of these in turn. 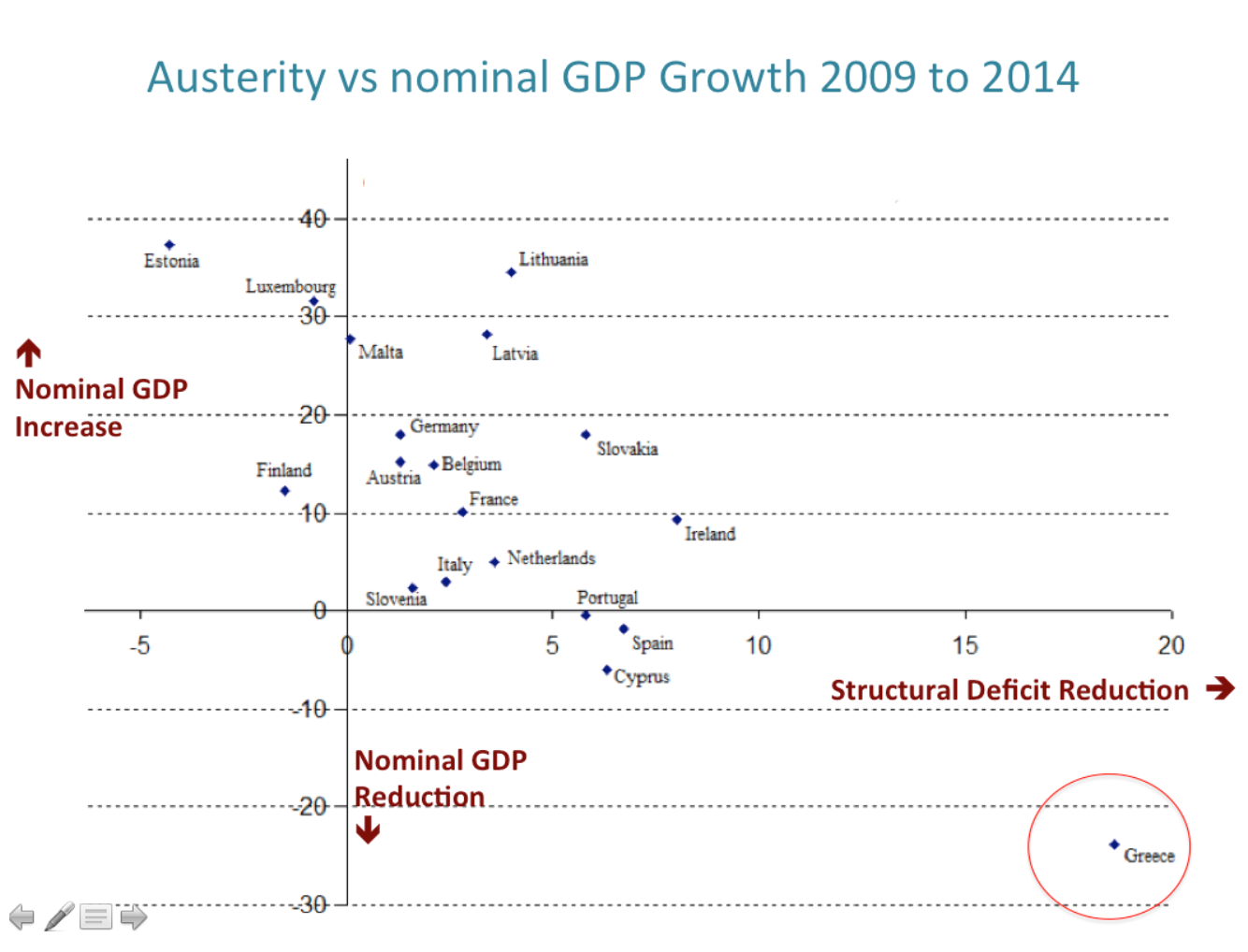 But austerity also shreds public services, damaging the quality of education and healthcare services by depriving these services of necessary funding. In Britain, Conservative governments have starved the NHS:

Ordinary citizens recognize that public services are in trouble, but right wing parties and governments explain this away by blaming immigrants and the EU for the drop in quality. This is straightforwardly false in rich Western European countries. Had public investment held steady, rich European countries could easily have accommodated a significant rise in immigration. By blaming immigrants and foreigners for declining public services, the right shifts blame and attention away from the austerity policies which are really doing the work. Triangulating and embracing right wing positions will only reinforce that core right wing narrative and make it more difficult for the left to offer meaningful resistance to austerity and to neoliberalism more broadly.

The story is more complicated in poorer European countries like Greece–it’s true that the Euro causes problems for Greece. While Greece is on the Euro it doesn’t have power over its monetary policy, so it cannot devalue its currency to shrink the real value of its debt. This leaves Greece with a choice between defaulting on its debt and meeting the terms of its creditors (mainly German banks) and the countries that defend the interests of those creditors (mainly Germany). But this problem results not from too much European integration but from too little–without a strong federal government to make economic decisions on behalf of the EU as a whole, Greece is stuck in a bilateral negotiation with Germany that leaves it isolated and without much leverage. 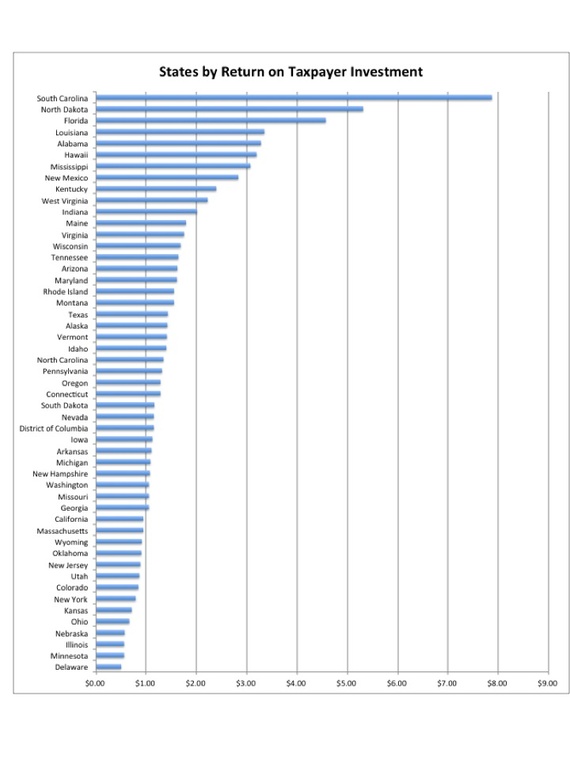 These payouts can be even bigger in times of trouble. During the savings and loans crisis in 1986-1987, Texas got around $75 billion from the federal government (around $165 billion in today’s money). This was around 25% of Texas’ GDP. This was a straight transfer–Texas was not required to repay this money. Texas didn’t have to negotiate with New York or California. It did not even need to negotiate with the feds. No one argued that Texas did not deserve help or that helping Texas would set a bad precedent. The federal government recognized the savings and loans crisis as a national issue, even though it disproportionately affected Texas, and it took care of it.

This is what we potentially give up when we say we should abandon European federalism in favour of the nation state. The only hope countries like Greece have of getting help from rich European countries is through a federal system that makes those rich countries help for the good of the union, irrespective of what German bankers might prefer. In the rush to condemn the EU for what it’s doing to Greece, Lexiteers risk throwing away the foundation for the very institutions which might help poorer European states get the benefits of federal redistribution.

There’s an old left wing debate about the extent to which it’s possible to do socialist policies in one country while all the surrounding countries remain capitalist. Stalin and Trotsky were famously on opposite sides–Stalin argued that socialism in one country was necessary, while Trotsky argued that it could not possibly succeed.

To do socialism effectively, it’s necessary for the international environment to be favourable. That means a similar level of socialism must be pursued by many countries at similar levels of economic development. In the decades following the depression and World War II, a level of democratic socialism became possible throughout the western world because many countries chose to embrace it all at the same time. But when the United States defected from those policies in the late 70s and 80s, it reintroduced the race to the bottom that has gradually undermined left wing policy throughout the western world. To reintroduce policies that will defend workers and the poor, we need to prevent right wing countries from taking advantage and sucking people and investment out of the countries that move to the left. Unless and until we face conditions that force all rich countries to move to the left–as the depression and the war did for a time–the only way to achieve this will be through the creation of left wing federal and international institutions which impose uniform minimum standards on national governments.

The fact that the EU is not yet nearly as left wing as many of us would like it to be is no reason to throw it away–it is the only European institution which has any level of recognised coercive power over national governments and effective left wing politics will necessarily involve politically capturing it and reshaping its institutions and policies to suit left wing objectives. The fact that doing this is difficult and might take a very long time is no excuse for a return to socialism in one country, which offers nothing but the deceptive appearance of success followed by decades of slow, demoralizing failure.

One of the left’s political objectives is the defence of European pension systems from right wing parties which want to reduce the size of pensions or raise retirement ages. By taking young, working-age immigrants, whether from the EU or from outside the EU, European states can boost the worker to pensioner ratio and make it harder for right wing parties to argue against the pension systems.

In most rich countries, immigrants contribute more in tax revenue than they consume in public services. In the countries which are exceptions to this rule, the cause is usually some previous cohort of aged immigrants who are now retired: 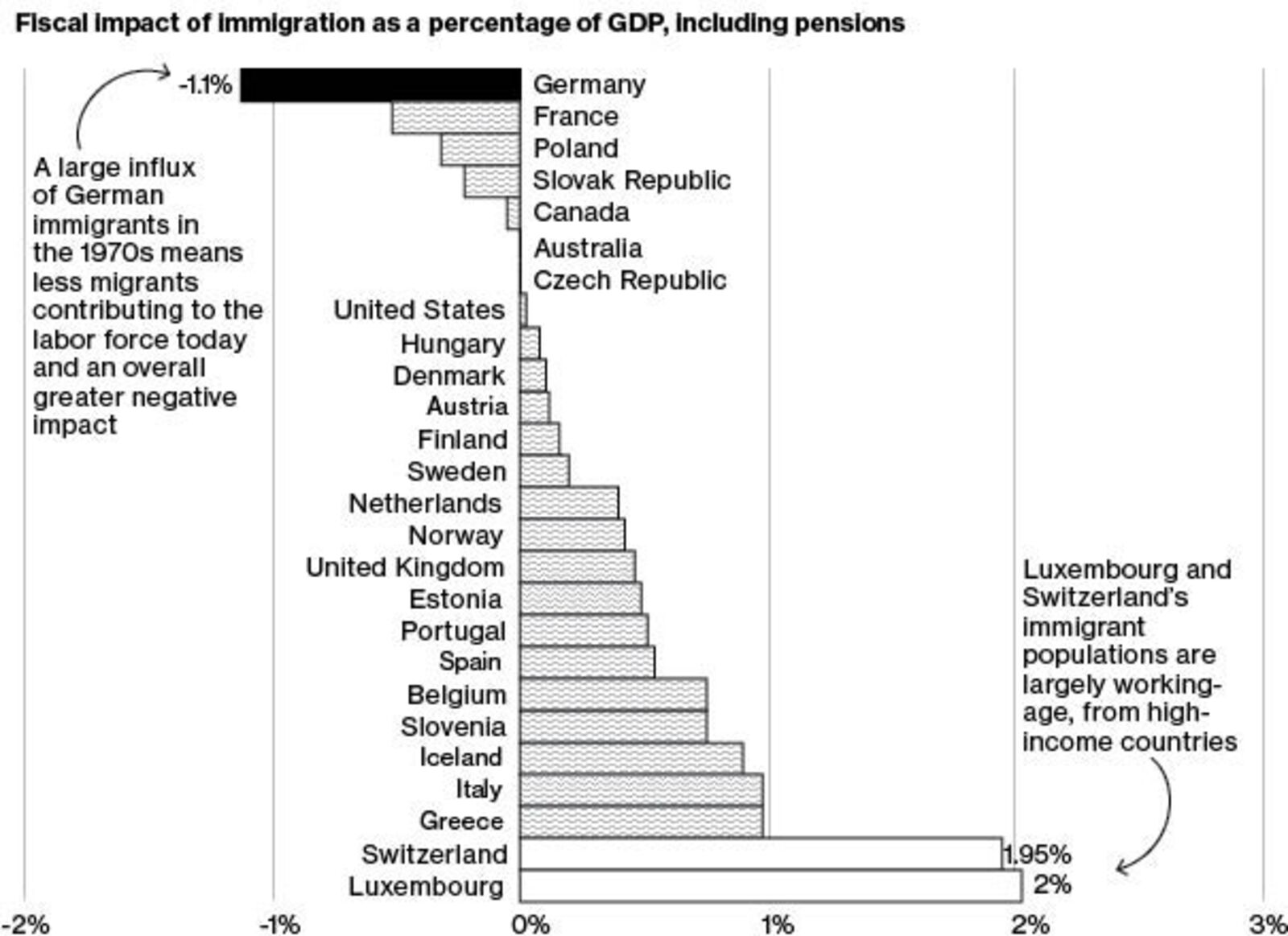 This underlines just how absurd it is to blame immigrants for the condition of the public services–fresh, young immigrants leave states with more money to spend improving services if they want to do so. Germany is a fascinating case–its entire population has been ageing and it’s been struggling to maintain a large enough workforce to keep its pension system healthy. As you can see in the chart, even its immigrant population is old. Germany has been combating this by taking large numbers of young, productive immigrants, and in recent years this took the form of admitting vast numbers of refugees–nearly 800,000 in 2015 and 2016 combined. This much-maligned policy has nonetheless helped Germany prop up its workforce. Compare it with Japan, a country which faces a similar demographic problem but refuses to take lots of young immigrants:

If the left aids and abets the nationalists in closing up the borders, it will deprive European countries of tax revenue and hurt already struggling pension systems. Poor and elderly citizens will pay the price for this fantasy of socialism in one country. 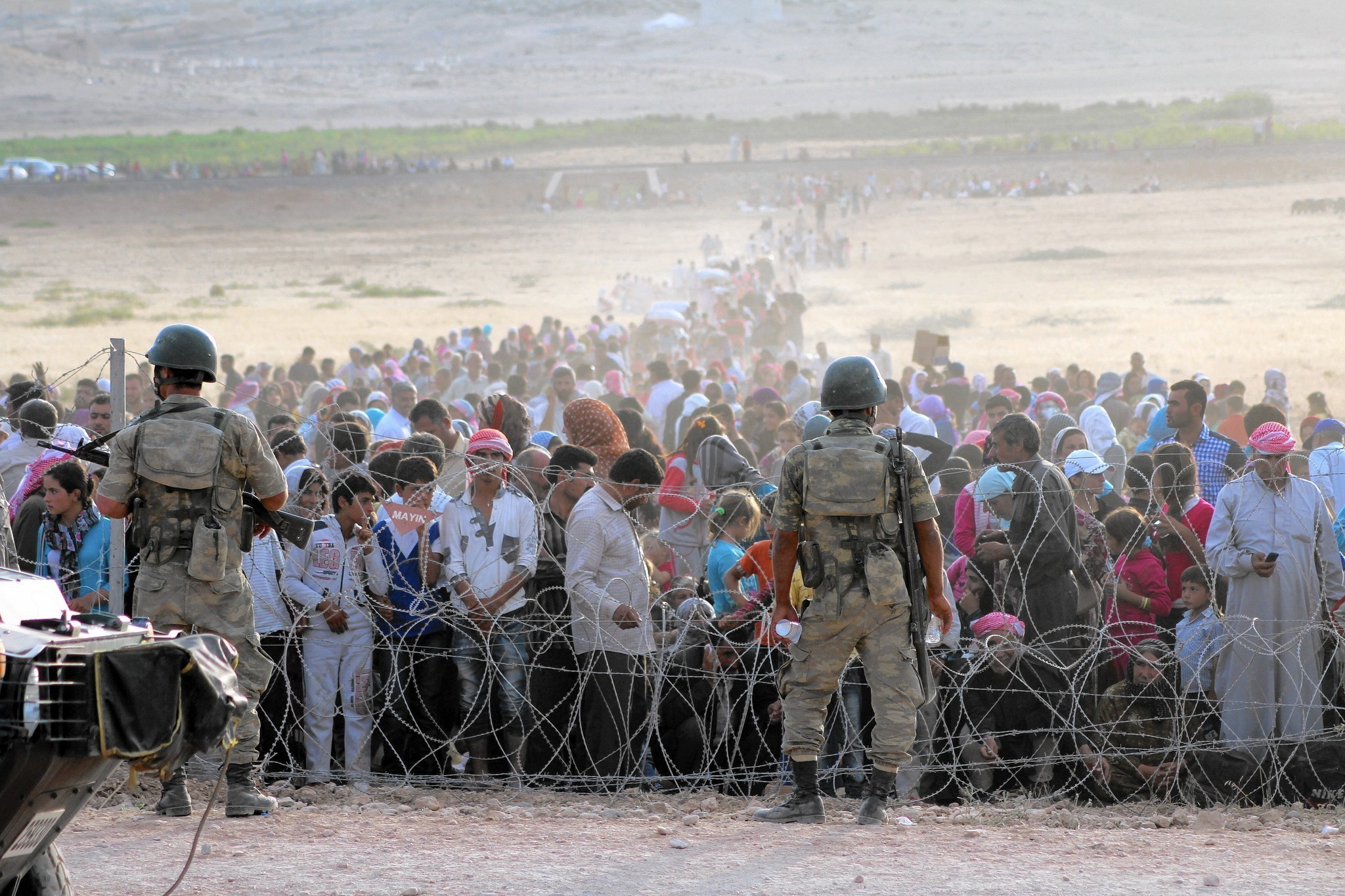 Nearly all the foregoing has been about helping the left succeed in rich European countries for the benefit of poor and working people living in rich countries. But the left is also supposed to care about distributive justice. Immigrants from Southern and Eastern Europe, North Africa, and the Middle East are poorer and disadvantaged. We should help poor and disadvantaged people when it is not too costly to us to do so, and the arguments I’ve presented show that it’s not only not costly for us to help, it’s advantageous to us.

To make matters worse, rich European states are to some degree collectively responsible for the poverty and violence from which all of these people now flee. Consider this:

Our institutions have done tremendous damage to these people. We should not sacrifice them in some bid to win working class voters back on the basis of false right wing myths about immigrants ruinng public services and committing fantastical crimes. Instead, these voters must be won back by boldly making the case that it is austerity and the lack of strong federal left-wing European institutions which leaves working class Europeans behind, not immigrants and not the EU.

If the European right gets its way–if the EU is blown to smithereens and the borders closed up–things will not go well for European countries. One by one, they will go to President Trump and beg him for a trade deal, the way Theresa May just did. He’ll say yes, but he’ll make unfair deals which subject European workers to even more competition from their American counterparts. America’s lower taxes and lax regulations will siphon jobs and investment out of Europe and force European countries to intensify the race to the bottom. Immigrants, refugees, and poor and marginalized peoples will be left to suffer and die. Every time a European lefty attacks the EU or makes a concession to the xenophobes and nationalists, they invite this ruin upon the whole of Europe, all in the name of a crypto-Stalinist fantasy that should have been jettisoned a long time ago. The rest of the world system matters. We can run, but we can’t hide.