A few days ago, President Trump and British Prime Minister Theresa May got together for a pow wow. It went so well, they even held hands. Some people saw this as an occasion to contrast the gruff, emotional style of Trump with the more polished style of May. But I see something else–these two leaders have a lot more in common with each other substantively than their personal styles let on. 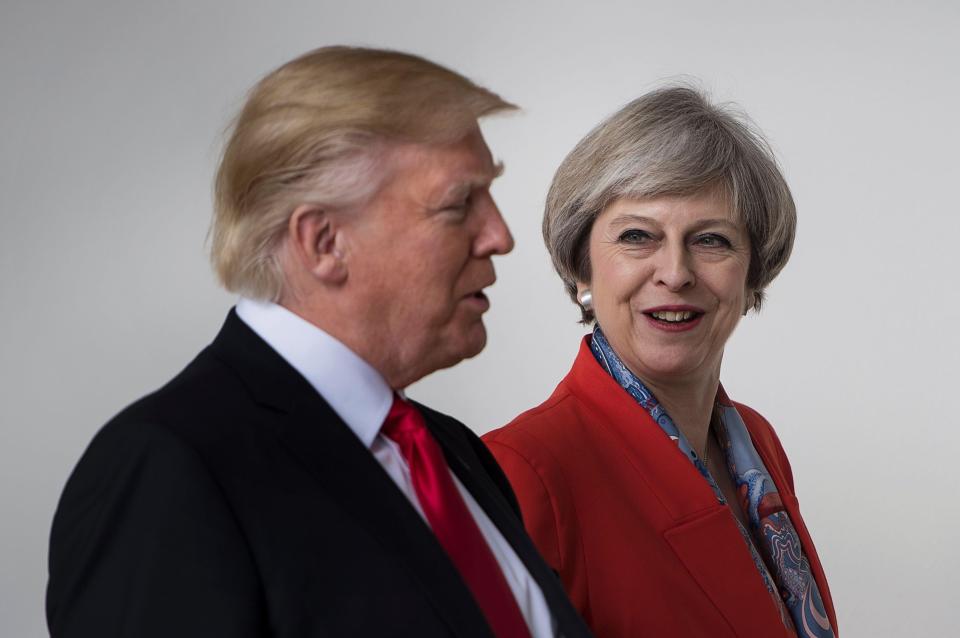 Trump and May have very different styles to suit very different political climates. Many Americans like their politicians loud, brash, and aggressive, while many British people like their politicians to give off a confident, competent vibe. But you can sell the same kinds of policies with either style. Both Trump and May have used the public’s appetite for right nationalism to generate support, and both are now implementing policy which targets immigrants and foreigners and blames them for adverse economic and social conditions. May is taking Britain out of the European Union so that she can stop immigration, and Trump wants to build a wall for the same purpose.

While Trump is loud and May is smooth, both have very aggressive, unconventional anti-immigration policies. Trump has barred immigrants and refugees from seven Middle Eastern countries, even if they already possess a green card or visa status. But May is no slouch–she has a new policy which bars immigrants from entering the country if they make less than £35,000 (about $44,000), and kicks out existing visa-holders who fail to meet this threshold after six years. The average British salary is £27,000 (about $34,000). May’s government also doesn’t allow British citizens to bring foreign spouses to live with them in the UK unless they make £18,000 (about $22,600).

But these similarities are there for anyone to see who is willing to look. There’s a deeper connection–both of them like to play chicken with other world leaders. You know chicken? Two drivers point their cars at one another and accelerate. The first to swerve out of the way is the loser. In a game of chicken, both players have an incentive to look like they might be willing to allow a terrible outcome so as to intimidate one another. To do that credibly, they have to genuinely raise the risk of a terrible outcome. The longer you keep your foot on the accelerator to convince me that you really are willing to hit me, the harder it will be for you to swerve if I do the same thing to you, and the more likely it is that we’ll both crash.

Trump is engaged in a game of chicken with Mexico. Mexico’s exports to the United States are nearly $300 billion. The high end estimate of the cost of the wall is $25 billion. If Trump imposes a big, fat tariff on goods from Mexico, he could easily cost the Mexican economy far more than $25 billion. Trump hopes to convince Mexico that he really will impose this tariff so Mexico consents to pay for the wall rather than experience the adverse effects of the tariff. But of course, a tariff on Mexico would have some pretty nasty effects on the US economy–the cost of the tariff would be passed onto consumers in the form of higher import prices, hurting economic growth. Yet, if it becomes clear that Trump is bluffing on the tariff, Mexico will have no reason to pay for the wall, so Trump must really make it convincing, and this increases the likelihood that Mexico will call Trump’s bluff and he’ll have to go through with a costly tariff.

For May, Brexit is a game of chicken. May continually says that she’s cool with it if Britain leaves the European Economic Area, the tariff-free European trade zone. She says she’ll go make bilateral trade deals with non-European countries like the United States. The aim is to convince the EU that Britain really will go it alone unless they offer Britain some kind of cushy package which allows them to stay in the single market. But of course, if there really is no deal, both sides will be hurt–the EU will have to pay tariffs to access the British market and the British will have to pay tariffs to access the European market. For May, the visit to Trump was all part of this elaborate game of chicken–reminding European leaders that the American president is ready and willing to cut a bilateral deal with her.

But May’s position is not as strong as she thinks it is. Trump is a right nationalist–he doesn’t care about Britain. All he sees is an opportunity to exploit European disunity. There are any number of ways he can use this. Maybe Trump wants trade concessions from Europe on TTIP. Maybe Trump wants European countries to meet their NATO defense spending targets. Trump could offer to back out of the trade deal with Britain in exchange for concessions from Europe. And if Europe says no? Trump can cut a bilateral trade deal with Britain, where he will have all the leverage. Britain needs the trade deal–America doesn’t. This means Britain can be made to sell out its workers and industries if Trump plays hardball over the terms of the deal, and he will.

In this case, style is misleading–May looks confident and competent, and Trump looks like he doesn’t know what he’s doing, but it’s Trump who has the negotiating advantage. Her game of chicken is his opportunity. This is a big part of why Brexit is so terrible, and why further disintegration of the EU would be so bad for Europe–when Europe is divided, big unitary powers like the US, China, and Russia can take advantage, playing different European states off against each other and forcing them to compete with one another for economic attention. No matter how you slice it, Brexit is a game that everyone in Europe loses.

This is what results from right nationalism–everything becomes zero sum and Darwinian. In those struggles, it is the big, powerful states that will prevail. The small countries that try to go it alone will swiftly find themselves isolated and exploited. European countries are so small. They should think twice before abandoning the EU and running off to play with the big boys. They’re liable to get hurt.