The Left Cannot Defeat the Right Through Violence and Suppression

In radical left wing circles, there’s this notion going around that the right can be intimidated into going away, through no-platforming and physical violence. “Bash the fash,” they say. “Make racists afraid again.” “Any time, any place, punch a Nazi in the face.” In the past I’ve argued that this kind of censorship turns right nationalists into martyrs and generates public sympathy for them. But today I want to make another, related point–the left is structurally physically weaker than the right and cannot prevail by force.

In most successful violent communist revolutions, the revolutionaries succeed because of massive defections by members of the military. During the Russian Revolution, Imperial troops refused to quell demonstrators and instead joined their ranks. From there on, ex-imperial soldiers played a pivotal role in both the February and October Revolutions. Many of them fought for the Bolsheviks in the Russian Civil War.

This was possible because of mass conscription. Imperial law required all males (with the exception of only sons) to serve 6 years in the military beginning at age 20, with a further 9 years in the reserves. This meant that men of all political stripes had to be in the army, and that meant that the soldiers and the public tended to have convergent interests–if people on the street were upset with state policy, it was highly likely that the troops would also be unhappy.

During the 1968 presidential campaign, Richard Nixon promised to end conscription in the United States, and that’s precisely what he did. Conscription ended in 1972. Ever since then, America’s military has been all-volunteer.  Many other countries have abolished conscription or restricted it to emergency situations:

The consequence of this is that the people who join the military are the people who like the idea of being in the military. This tends not to be left wing people. At this point, veterans of all income brackets and age groups are significantly more likely to support Republicans: 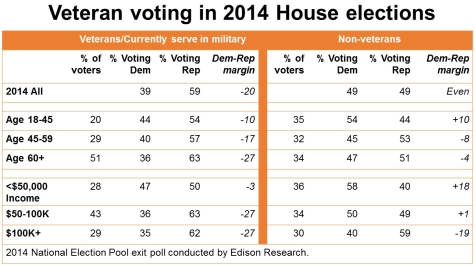 The veteran gap grew larger during and after the Iraq and Afghanistan Wars–people who volunteered to fight in these wars were much more likely to be supporters of President Bush at that time. Iraq and Afghanistan were the first prolonged, multi-year ground wars since Vietnam. The people who join the military during those kinds of wars tend to also be people who believe in these wars as just causes. Right-wing hawks tend to believe that more wars are just than left-wing doves, so during wars of significant duration the military (and the veteran population) will tend to get more right-wing and hawkish.

When we respond with violence and coercive no-platforming, we play directly into that narrative. We help the fascists build a world where violence in politics is acceptable–indeed, where nonviolent politics strikes people as universally ineffective and naive. The more people believe that political disputes can only be resolved through violence, the more they are driven into one of two camps–the radical communist left and the reactionary fascist right. Under the conditions that prevail today in the United States and in most countries, the reactionary fascist right will defeat the radical communist left in combat nearly every time. When we build a violent world, we build a world to which the creatures of violence are best adapted. A century ago, many brutal, ruthless, well-armed people were left wing and many left wing people were brutal, ruthless, and well-armed. That’s not true today.

So instead of bashing the fash–which can only end with the fash bashing us–opponents of fascism should instead work on developing a credible left egalitarian alternative to the right nationalists who are sweeping across the world. That alternative needs to appeal to people who have voted for people like Donald Trump or might consider doing so. How many of those people are impressed by no-platforming? It’s not many. A large majority of Americans believe that people should be able to say offensive things about minorities publicly:

It hasn’t worked, it isn’t working, it won’t work. We have to offer something more than this.