Four Horses of the Apocalypse 2016 US Presidential Election Sim

A few people have asked me what would happen if Bernie Sanders ran as an independent or on a joint Green Party ticket with Jill Stein, or if the Republican establishment ran their own candidate against Donald Trump. Some people want to know what happens if both parties split and we get an extremely messy 4-way race. These questions are difficult to answer, but I’ve put together a very basic election simulation to try to give you a sense for what might happen.

Before we begin, I want to emphasize that these simulations have a lot of simplifying assumptions and they should not be thought of in any way as an exact prediction. My guiding principle in putting this together was to minimize the extent to which I had to make subjective judgments, and to do that I had to avoid considering many factors which would change the results.

My method was to take the 2012 election results for Obama and Romney and divide the Obama results between Clinton and Sanders on the basis of their performance in the 2016 primaries and caucuses while dividing the Romney results between Trump and his hypothetical establishment opponent (I like to call him “Jitt McRomnain”). For Clinton and Sanders this was pretty straightforward, but for Trump I had to estimate the level of support he would receive from supporters of the other Republican candidates in a two-man race. I did this in three different ways:

Even with these assumptions, there’s a lot that is painfully incomplete about this simulation and I want to be very up front about its limitations:

So why did I do this anyway? Because it’s fun, and because it gives you a basic foundation to work from. If you think you can get around some of these limitations and do a more complete simulation or you want to look at the state by state percentages, I will happily share my data with you. E-mail me at bms47@cam.ac.uk and ask me for it.

With that out of the way, here’s what you came for. Clinton is blue, Sanders is green, Trump is orange, McRomnain and a united GOP ticket are red.

That’s a blowout. Clinton gets 42 electoral votes, Sanders gets 7, the Republicans get 489.

For this sim I used Trump Standard, which gives McRomnain the best shot. Trump gets nothing, McRomnain gets 78, Clinton gets 460.

On Trump standard, Trump just isn’t strong enough to win any states. Sanders gets 63 electoral votes, Clinton gets 226, and McRomnain gets 249. No one gets the 270 required to win outright, so the election is thrown to the house, where the Republicans in the house use McRomnain’s lead in total electoral votes to rationalize making him president. This sim is Lindsay Graham’s dream, it’s the last best hope of the Republican establishment. But it’s doubtful Trump would really do this badly. The most interesting result is Mississippi, where Sanders’ weakness and Trump’s strength allow Clinton to poach a deep southern state.

In this sim I helped Trump out a bit by finding him favorable polls in the western states and handing him the votes that went to Carson, Christie, Huckabee, and Santorum. A stronger Trump gets Trump a few states and it also swings a few states to Clinton and Sanders. Trump ends up with 26, Sanders gets 91, Clinton gets 242, and McRomnain gets 179. Again, the election goes to the house, but this time the house Republicans would have to override Clinton’s plurality to pick McRomnain, making the outcome more contentious. This would not be without precedent–the 1824 election was thrown to the house and the house decided to give the presidency to second place finisher John Quincy Adams at the expense of Andrew Jackson: 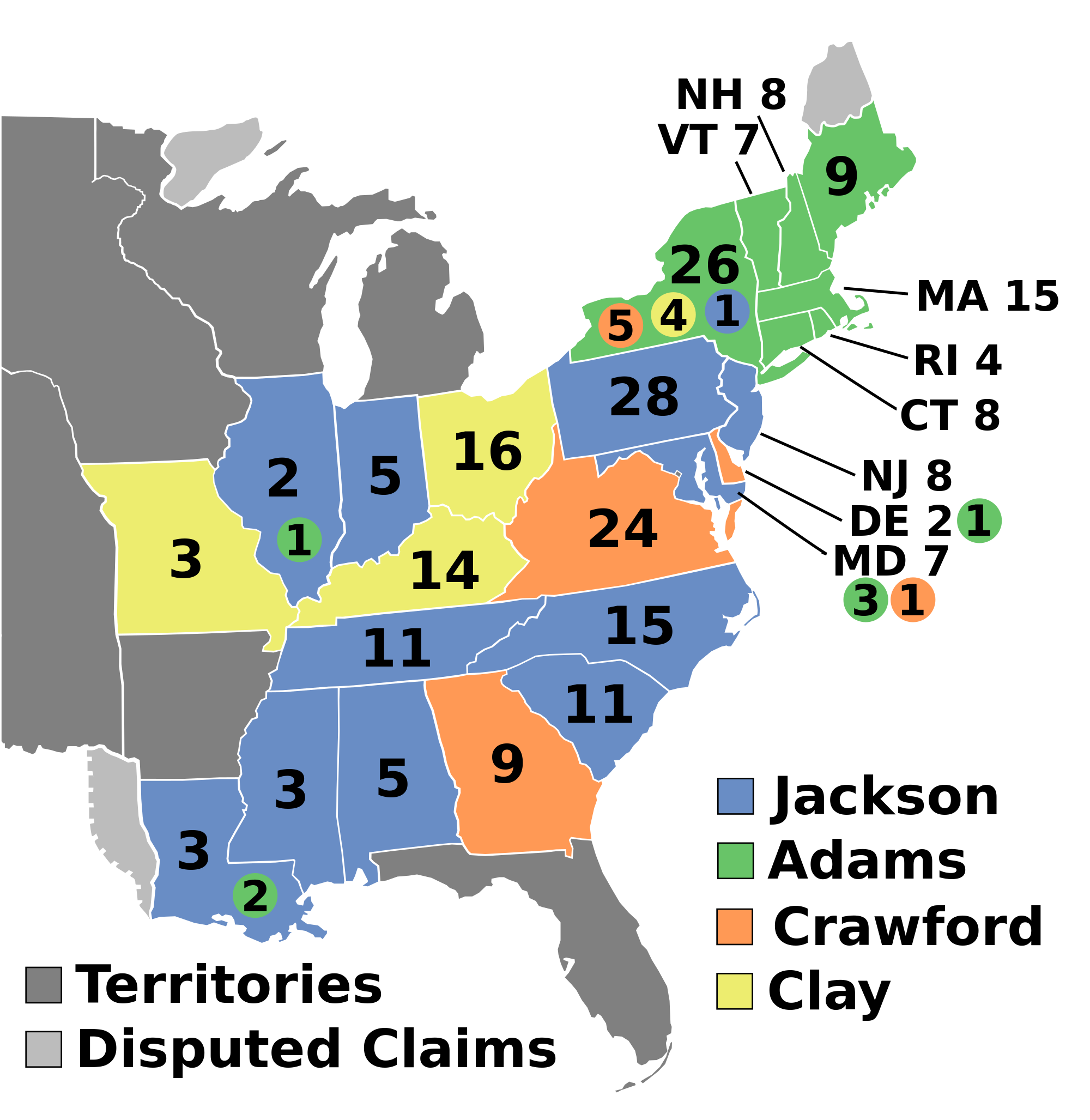 This time I threw in half of Cruz’s votes for Trump, and it made a big difference. Trump takes nearly every state from McRomnain and most of those he does not take himself he hands to Clinton. Trump ends up with 195, Sanders gets 88, Clinton gets 243, and McRomnain gets 12. Again the election is thrown to the house, but this time thanks to the 12th amendment the house Republicans would be unable to choose McRomney, as they are only permitted to pick from among the top three candidates. There would be a lot of pressure on them to give the election to Clinton.

Debs did not carry any states, and Roosevelt and Taft split the remaining Republican vote, handing an easy win to Wilson. We also ran 4 in 1860:

Lincoln and Breckinridge were the north and south’s more hardline candidates, while Douglas and Bell were the more conciliatory options, respectively. The hardliners beat the conciliators in both regions. Lincoln won because he crushed Douglas in the north and the north had more electoral votes than the south because of its much larger population.

But let’s not compare this presidential election to the one immediately preceding the Civil War. Things aren’t that dire…right?