What the Arab Spring Teaches Us About Armed Rebellion

Horrible things have been happening to Aleppo, a UNESCO World Heritage site and Syria’s largest city. Large parts of the old city has been destroyed, though not for the first time–the city was sacked as recently as 1440 by Tamerlane, a vicious Mongol conqueror who is estimated to have killed 5% of the world’s people. All told, the Syrian Civil War has killed more than 270,000 people, creating more than 4 million refugees and displacing 7.6 million. These high losses have not resulted in any constructive political change in Syria–Bashar al-Assad’s faction remains the strongest in the country. The conflict has made no one better off aside from the Islamic State, which has used the chaos to carve out a slice of territory for itself:

The Syrian government is red, the Iraqi government is purple, the rebels are green, Islamic State is black, and the Kurds are orange. When the Syrian Civil War started, a lot of people in the west were excited by the possibility of overthrowing the Assad regime and creating a new democracy in the Middle East. Instead we have a bloody power vacuum filled in which the only winners are terrorist organizations. What’s interesting about this is that Syria is not an isolated case–the Arab Spring revolutions that turned violent all went so badly, while those that remained peaceful sometimes achieved meaningful results.

There are four countries in the Middle East in which the Arab Spring protesters resorted to armed rebellion–Syria, Iraq, Libya, and Yemen.

Each of those countries remains gripped by civil conflict and is much worse off. In addition to the 270,000 dead in Syria, there’s an additional 40,000 dead in Libya, 20,000 dead in Iraq, and 10,000 dead in Yemen. Syria and Iraq are not the only Middle Eastern countries that now provide refuge for terrorists. Al Qaeda controls significant territory in Yemen:

And the Islamic State has holdings in Libya: 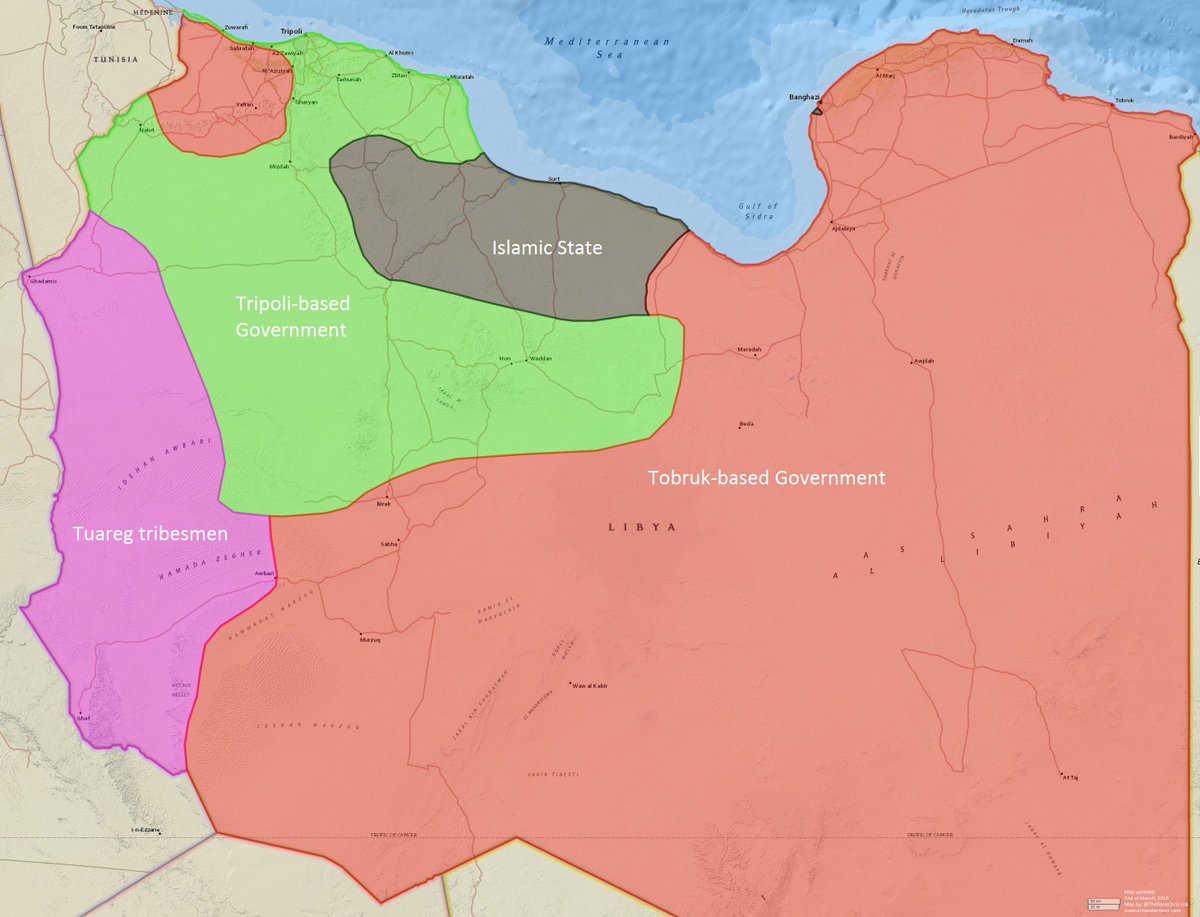 Economic data for these war torn countries is limited, but we do have a per capita GDP estimate for Libya indicating that the country has lost half its output since the Arab Spring began:

Why are these countries in such terrible trouble? To succeed, revolutionaries need the state’s armed forces to give up the fight. This can only happen when one of three conditions are met:

In each of these countries, the revolutionaries were too poorly armed, too disorganized, and too divided to win with #1. The armed forces have failed to defect because the internal sectarian divisions in these countries make it impossible for the members of the armed forces to imagine that their sects might be treated fairly by a new revolutionary government. Syria is torn between Alawites who remain loyal to the government and the Sunnis who feel victimized by it, and the former do not trust the latter to treat them well if the Assad regime collapses. In Iraq, the Shiites will not give ground to the Sunnis, having seen the way they were treated by Sunni dictator Saddam Hussein when he was in power. Libya remains divided between the west, which was broadly loyal to Gaddafi, and the Cyrenaican east, which resented Gaddafi for overthrowing King Idris and redistributing the east’s oil wealth throughout the rest of the country. Yemen’s territorial division mirrors the Cold War division between the capitalist north and the communist south as well as the religious distribution (mostly Shiite in the north, mostly Sunni in the south). When the military and the revolutionaries consist of opposed sects, the military is not going to lay down its arms or defect. #2 is off the table.

That leaves #3–banking on a foreign intervention. In Libya, the rebels got their foreign intervention courtesy of Hillary Clinton, who campaigned hard for it behind closed doors. NATO removed Gaddafi and cleared the way for the rebels to form a new government. But the underlying division between the west and the east was never addressed. It is impossible to have a democracy among factions that are deeply hostile to one another, because a victory for one faction means exploitation and expropriation for the other, eventually leading to civil conflict. That civil conflict can only yield three stable outcomes:

Foreign interventions that decapitate the head of one of the factions but do not produce a strong negotiated settlement or partition produce unstable outcomes that eventually yield new rounds of exploitation and new rounds of civil conflict. Killing Gaddafi does not vanquish the western Libyans as a political force. Killing Assad would not vanquish the Alawites. Killing Saddam Hussein did not vanquish the Sunnis. The overthrow of Saleh in Yemen did not even vanquish Saleh himself. We don’t want to vanquish these factions–that would be genocide–we want negotiated settlements and, if necessary, partitions. Foreign interventions in these countries on behalf of rebel factions have enabled these rebels to seize power without negotiating, and that sets them up to fail.

And foreigners do not exclusively intervene on behalf of rebels. The Syrian rebels waited for a western intervention on their behalf that never came, leaving them reliant on support from Gulf states like Saudi Arabia. In the meantime, the Syrian government received extensive support from Iran and Russia. The result is a messy web of alliances that leaves the Syrian rebels in a relatively weak position:

It is very difficult for revolutionaries to prevail against a state via armed rebellion. When they are dealing with an army that is stronger than they are and that they oppose for sectarian reasons, they can only prevail if they are bailed out by foreigners, and unless those foreigners ensure a sound negotiated settlement or partition this “victory” is a fleeting lie.

The United States is terrible at promoting negotiated settlements in the countries in which it intervenes. It had nearly 9 years to create a set of institutions that would effectively balance competing groups in Iraq, and it produced a regime that alienated the Sunni population, driving it into the arms of the Islamic State. Iraq ranks 161 out of 168 on Transparency International’s corruption index. Today Hillary Clinton blames the Libyan Transitional National Council for Libya’s woes instead of recognizing that by removing Gaddafi we infantilized the Libyan rebels and allowed them to take the state without negotiating with their enemies and with each other. What’s more, by continuing to intervene in countries we give protesters false hope that they can defeat powerful hostile armies by military means and disincentivize the peaceful protest and negotiation that leads to real settlements. While we often hear about the Middle Eastern countries where things have gone badly, there are a lot of countries where the protesters kept things largely peaceful and won significant concessions, ranging from significant constitutional reforms in Morocco to the outright overthrow of the Ben Ali government in Tunisia. These countries benefited from weaker internal divisions and peaceful tactics, which limited the ability of the government to use force and encouraged negotiation. In Morocco only 6 were killed; in Tunisia just 338. This doesn’t mean every peaceful protest movement will succeed–in Egypt the military threw out Mubarak to appease demonstrators, only to toss out the new Morsi government when that government began threatening Egypt’s secularism, producing a new military dictator and leaving the country in roughly the same place it was before. But unlike Syria, where 270,000 have been killed, Egypt has only lost 4,000, and its economy continues to function.

The moral of the story is clear–armed rebellion is rarely the right strategy for revolutionary movements, and its costs are often much greater than its benefits. US foreign policy should reflect this–we should be much less willing to back armed rebellions.