How Obama Can Replace Scalia

Today Supreme Court Justice Antonin Scalia died unexpectedly in his sleep after participating in a quail hunt. I extend my sympathies to his family and to the conservative movement, which has lost one of its titans. Nevertheless, I am a political writer, and my role is to write about politics. So what are the political implications of Scalia’s death?

Scalia was politically perhaps the most conservative justice on the court, though he had softened a bit with age. Using Martin-Quinn scores to measure justices’ left/right leanings (on the chart, left is down, right is up), Scalia in his later years was more conservative than Roberts or Kennedy, but not quite as far to the right as Alito or Thomas:

Nevertheless, Scalia has taken a variety of quite extreme stances over the years. Here are just a few:

President Obama does not leave office until January 20. This means that Obama has 11 months to nominate a new Supreme Court justice and get that nominee confirmed. If you’re wondering whether this gives him enough time, the answer is probably yes. Since 2000, it has never taken a president more than 6 months from the date of retirement or death to get a justice replaced, and the last justice to die in office–William Rehnquist–was replaced in just one month: 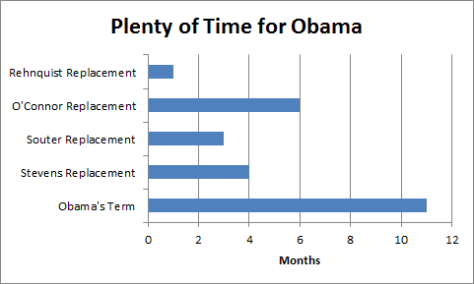 Currently the democrats have 44 seats in the senate, with 2 independents that both caucus with the democrats. This means they can rely on 46 votes. This means they would need 4 more votes–if they can get to 50, Vice President Biden can break a tie. Barack Obama’s past court nominees have each received a few republican senate votes. Elena Kagan got the support of 5 republicans, while Sonia Sotomayor got the support of 9. However only three of those republicans remain in the senate today. They are:

All three of these republicans were re-elected in 2014 and do not have to fear challenges from the right in primaries until 2020. Collins is said to be considering a run for governor of Maine in 2018. Maine has been a blue state in presidential elections since 1988 and Collins has a reputation for being a moderate. In 2014 she was re-elected with 68% of the vote. It is reasonably likely that Obama could potentially get the support of these three. If so, that would bring his vote total up to 49. He would need one more republican.

Who are the most likely republicans to defect? I’ve drawn up a short list of republicans who have developed relatively moderate reputations since 2010:

If Obama can get Graham, Collins, and Alexander on side, he needs just one more of these four.

However, politics is changing and becoming more polarized. If things work the way they have historically, Obama has a strong chance of getting a reasonably left leaning nominee narrowly confirmed. Given that we are dealing with the senate rather than the house, there’s a good chance Obama can find the votes. But if the republicans are willing to violate hundreds of years of precedent and obstruct a nominee with a filibuster, or if senate republicans are much less willing to cooperate with the president than they were in 2010, things could remain unresolved for some time. That said, it would be a risky move for senate republicans, because a protracted fight could be used by the democratic nominee in the 2016 presidential race to highlight republican obstructionism. In the meantime, any Supreme Court decisions that are 4-4 result in no ruling being issued–the lower court’s rulings are instead upheld.

42 Comments to “How Obama Can Replace Scalia”