The questions that have been asked so far in this debate illustrate why the American people don’t trust the media. This is not a cage match. And, you look at the questions — “Donald Trump, are you a comic-book villain?” “Ben Carson, can you do math?” “John Kasich, will you insult two people over here?” “Marco Rubio, why don’t you resign?” “Jeb Bush, why have your numbers fallen?” How about talking about the substantive issues the people care about? And Carl — Carl, I’m not finished yet. The contrast with the Democratic debate, where every fawning question from the media was, “Which of you is more handsome and wise?”

This was a clever move by Cruz–republican voters have been trained to believe that the media is out to get them, to suspect that whenever the republicans get asked tough questions that the journalists’ claims are exaggerated or even fabricated. He succeeded in distracting the viewing audience from the real story of the third debate–the deeply flawed tax plans laid out by the GOP candidates.

The republican candidates are split into two groups on tax policy. On one side are the Romney taxers (Bush, Rubio, Kasich, Trump). These candidates are all supporting variants of the tax plan Mitt Romney proposed in 2012. These tax plans are generally considered relatively moderate, but this is largely because most of the people writing about these proposals don’t know very much about tax policy. As we discussed in September, the Romney tax plans are regressive and they create large budget deficits. They all cut tax rates and claim to make up the lost revenue by closing loopholes (also known as “base broadening”). Bush’s plan creates three brackets of 28%, 25%, and 10%. Trump’s offers four brackets of 25%, 20%, 10%, and 0%. Rubio’s are 35%, 25%, and 15%. Kasich said the top rate would be 28% (same as Bush’s), but he didn’t specify the other rates. When we just look at the rates, it appears that everyone’s taxes will be reduced, but once the loopholes are accounted for, it becomes clear that these tax plans redistribute large amounts of wealth from the poor and middle class to the rich. This is because republicans refuse to close loopholes that might discourage investment, which drastically reduces the ability of these plans to recoup revenue from the rich. When the Tax Policy Center looked at Romney’s version of this plan in 2012, it concluded that the other loopholes that remain available for closure predominately favor working people and the middle class, not the rich:

Our major conclusion is that any revenue-neutral individual income tax change that incorporates the features Governor Romney has proposed would provide large tax cuts to high-income households, and increase the tax burdens on middle- and/or lower-income taxpayers.

This means that even if tax expenditures are eliminated in a way designed to make the resulting tax system as progressive as possible, there would still be a shift in the tax burden of roughly $86 billion from those making over $200,000 to those making less than that amount.

Worse, even if Romney had made full use of the loopholes that favor poor and working Americans, he still would not have been able to raise enough revenue to make the tax plan revenue neutral. The plan was forecasted to result in a net loss of $360 billion a year, or $3.6 trillion in the next decade. Some estimates put the figure significantly higher than that, suggesting it would cost $480 billion a year or even as high as $900 billion a year ($4.8 trillion to $9 trillion in the next decade). The Tax Foundation issues some of the most conservative estimates on tax policy, assuming that tax cuts will deliver vast amounts of economic growth, but even they put the losses generated by Romney style plans at a minimum of $100 billion a year, or $1 trillion in the next decade. They explicitly said this about both the Rubio and Bush plans. Kasich’s plan is broadly the same as Bush’s, and Trump’s is even more expensive. And bear in mind, we’re talking about the Tax Foundation here. Even Greg Mankiw (George W. Bush’s chief economist) thinks the “dynamic scoring” models the Tax Foundation employs deeply underestimate the costs:

I used the phrase “charlatans and cranks” in the first edition of my principles textbook to describe some of the economic advisers to Ronald Reagan, who told him that broad-based income tax cuts would have such large supply-side effects that the tax cuts would raise tax revenue. I did not find such a claim credible, based on the available evidence. I never have, and I still don’t.

And again, these plans are not just expensive, they are also regressive, shifting the tax burden away from the rich:

These are the plans that are considered moderate and uncontroversial. On the other side are the flat and fair taxers (e.g. Carson, Cruz, Paul, Huckabee). Most of these folks are promising to make all the rates the same. Cruz and Carson both promised 10% for everyone (though Carson is now considering going up to 15%). Paul promised a 14.5% flat rate. Huckabee is a bit different–his fair tax plan calls for a national sales tax to replace the income tax. To make their plans appear progressive, the flat taxers exempt some income from the flat rate. Paul’s plan calls for a $5,000 personal exemption and a $15,000 standard deduction. But even using Tax Foundation figures, it’s easy to see how regressive these plans are: 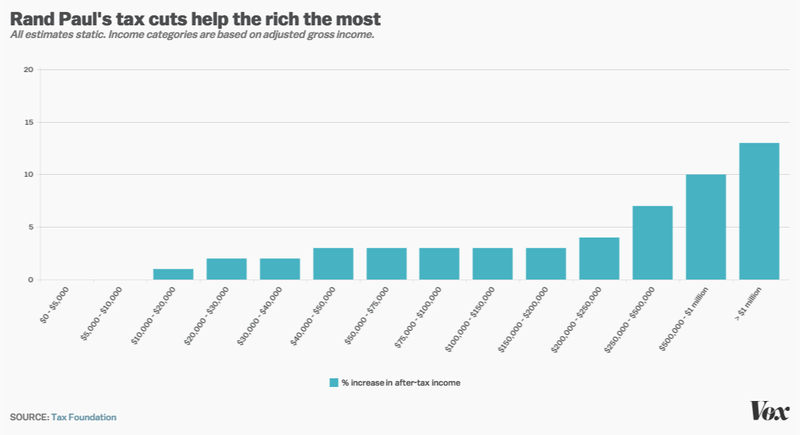 Naturally, lowering the top rate from 39% to 10% creates a massive revenue hole. Flat taxers try to plug it a bit by adding a European style value added tax (VAT). This is a regressive tax on consumption and it hits the poor the hardest. When the middle of the road Tax Policy Center ran the numbers for a 12.9% VAT, it concluded that the VAT alone would cost the poorest quintile nearly 11% of their total income. Cruz has proposed a 16% VAT. Paul tries to hide his 14.5% VAT by making your employer pay it. Carson hasn’t even bothered to get into the specifics of what his rates would be. Huckabee claims he can eliminate income tax completely and just do a massive VAT of unspecified size. On his website, Huckabee tells you that his fair tax will do all sorts of wonderful things without telling you how it actually works. It works by crushing the life out of consumption, robbing the economy of the demand it needs to grow.

These plans are also very expensive. Even the right leaning Tax Foundation puts the cost of Rand Paul’s tax plan at nearly $2 trillion in the next decade. The left leaning Center for Tax Justice puts it at $15 trillion. The plan is a net revenue loser despite the explicit promises Rand Paul has to deeply cut federal spending in a wide array of controversial areas, including but not limited to:

Paul has promised to do all of that, and still his tax plan costs trillions. Other flat taxers like Cruz and Carson have not even been willing to disclose what they would cut to reduce the cost of their plans.

The republican candidates like to accuse the democrats of giving away “free stuff” without taking seriously the costs involved. The pot calls the kettle black. Indeed, the kettle is not even black in the first place–the democrats’ spending plans are remarkably budget-conscious, with public spending replacing already extant private sector spending. Carson and Paul are fond of touting their credentials as medical doctors, but on tax policy, they’ve committed economic malpractice. The sad thing is that the flat taxers’ plans are so impractical that they make the Romney style plans look reasonable when in fact they are not. In this way, extremist candidates help to legitimize the bad policy proposals of their opponents by making those opponents seem moderate and sensible by comparison. But instead of talking about the deep inadequacies of these policies, we’re talking about how the media is ostensibly biased against the GOP for having had the gall to point this out. The American right wing is practicing a sick kind of politics in which “see no evil, hear no evil, speak no evil” has pushed out genuine intellectual debate.