In recent weeks, I’ve observed a troubling trend among America’s pundit class–the tendency to make really lazy Bernie Sanders/Donald Trump comparisons. You see, Sanders and Trump are both political outsiders, they both tell it the way they think it is, they both have experienced significant growth in their poll numbers in recent months, and they’re both causing problems for their parties’ other candidates. Revelatory, right? Pundit centrists love to draw strained equivalencies between the left and right in American politics and they love to focus on elections as narrative struggles between good guy centrists and bad guy extremists, so it’s natural for them to see these two figures as analogues. In truth, Sanders and Trump could not be more different–not merely in terms of their ideologies and policies, but in their whole approach, in their very attitude toward the public. 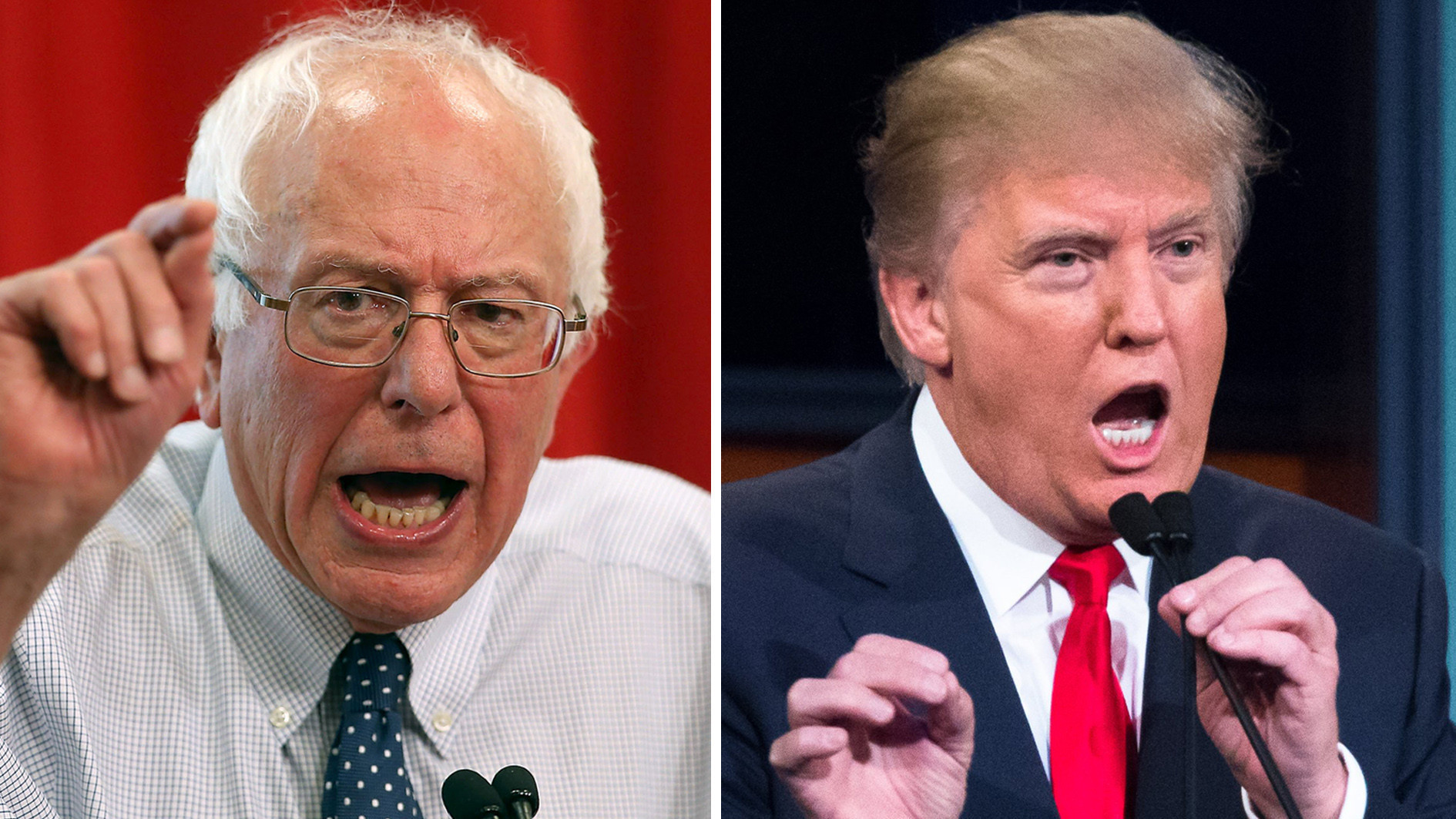 To put it simply, Donald Trump is all style, no substance. Bernie Sanders is all substance, no style. If you ask Donald Trump a policy question, Trump will try to turn it into an opportunity to score style points. If you ask Bernie Sanders a style question, Sanders will refuse to answer it and scold you for failing to talk to him about policy. Pundits respond to Trump by constantly talking about how much style he has while berating him for refusing to talk about policy, and the media responds to Sanders by mocking him for having no style and ignoring or glossing over his policy positions. In both cases the implicit goal is the evisceration of the “extremist” challenger for the benefit of some allegedly mainstream alternative. (Clinton? Bush? Kasich? Rubio? Walker?)

Let me give you a couple examples. During the recent republican debate, Trump was pressed to substantiate some claims he has made about immigration:

Trump responds immediately by going for style points, attacking the moderator and the journalists who have asked him about this, dodging the question, and reasserting his view:

So, if it weren’t for me, you wouldn’t even be talking about illegal immigration, Chris. You wouldn’t even be talking about it. This was not a subject that was on anybody’s mind until I brought it up at my announcement. And I said, Mexico is sending. Except the reporters, because they’re a very dishonest lot, generally speaking, in the world of politics, they didn’t cover my statement the way I said it. The fact is, since then, many killings,murders, crime, drugs pouring across the border, are money going out and the drugs coming in. And I said we need to build a wall, and it has to be built quickly. And I don’t mind having a big beautiful door in that wall so that people can come into this country legally. But we need, Jeb, to build a wall, we need to keep illegals out.

Trump claims he talked to some people at the border and then goes back to grandstanding and attacking Wallace:

Border Patrol, I was at the border last week. Border Patrol, people that I deal with, that I talk to, they say this is what’s happening. Because our leaders are stupid. Our politicians are stupid. And the Mexican government is much smarter, much sharper, much more cunning. And they send the bad ones over because they don’t want to pay for them. They don’t want to take care of them. Why should they when the stupid leaders of the United States will do it for them? And that’s what is happening whether you like it or not.

Trump is not stupid–he realizes that there are a significant number of Americans who believe his claim regardless of the evidence and respect rudeness and insult politics as a form of resistance against political correctness. He makes these people happy by refusing to play by the rules, by always going on the offensive against anyone who criticizes his people or their worldviews. These people believe that Mexico is “killing us at the border” as an article of faith. They don’t need or want Trump to prove it. When Trump finally did release a policy paper on immigration, he continued asserting many of the same old positions without offering adequate evidence, promising extremely aggressive policies that would cost a lot of money and inflict immense suffering on many families.

But aside from a few policy-focused blogs, most people have not really been discussing Trump’s policy positions. The discussion of Trump after the debate has centered around his attacks on moderator Megyn Kelly–attempts by Trump to score more style points with his supporters that have nothing at all whatsoever to do with policy. Despite the efforts of many pundits to use Trump’s comments to sink him, Trump’s core constituency continues to admire his bellicosity, and as of August 18, his quarter of the republican electorate continues to stand by him.

In the meantime, Bernie Sanders has policy positions out on an array of issues. I don’t fully agree with all of them, but many are well-sourced and cogent:

Whether we agree with Sanders on each of these issues or not, Sanders has sophisticated positions about which we could have important and interesting conversations. Instead, the focus is continually on Sanders’ perceived style deficits. Some writers have criticized Sanders for not talking about race enough or in the way they would prefer, ignoring his racial justice policy positions and his immense body of work on race issues. Sanders frequently gets off-topic questions. Take this recent exchange between Sanders and Ana Marie Cox, a journalist for the New York Times:

Cox: Do you think it’s fair that Hillary’s hair gets a lot more scrutiny than yours does?

Sanders: Hillary’s hair gets more scrutiny than my hair?

Sanders: Is that what you’re asking?

Sanders: O.K., Ana, I don’t mean to be rude here. I am running for president of the United States on serious issues, O.K.? Do you have serious questions?

Cox: I can defend that as a serious question. There is a gendered reason—

Sanders: When the media worries about what Hillary’s hair looks like or what my hair looks like, that’s a real problem. We have millions of people who are struggling to keep their heads above water, who want to know what candidates can do to improve their lives, and the media will very often spend more time worrying about hair than the fact that we’re the only major country on earth that doesn’t guarantee health care to all people.

While it is generally true that female candidates get more physical scrutiny than male candidates and that this is unfair, Sanders is an exception to this rule. Sanders’ hair is constantly made fun of by pundits and comedians who enjoy mocking him as a “wild-haired socialist” because of his often messy hairdo:

In the first ten seconds of his interview with Bernie Sanders, Seth Meyers mentions Sanders’ hair:

If you look around the internet, you’ll find all kinds of Bernie Sanders hair jokes. Some have compared him to Doc Brown from Back to the Future:

Buzzfeed has an entire article devoted to Bernie Sanders’ hair jokes. The Washington Post did a whole bit called “Great Moments in Bernie Sanders’ Hair“. The list goes on. So in point of fact, no, Hillary Clinton’s hair does not get more scrutiny than Bernie Sanders’ does. But why should we even have this argument? If Clinton’s hair did get more attention (as is generally the case when women run against men), what exactly would we expect Bernie Sanders to do about that? What policies should the government enact to make the media treat men and women more equally? Most would agree that while the disparity is unfortunate, any kind of substantive policy aimed at targeting this would unacceptably infringe upon press freedom. So what did Cox want from Sanders? Odds are, she wanted him to say something sympathetic about gender inequality, to show that his style of rhetoric matches up with what she wants to hear. I have no doubt that his refusal to throw her that bone will be read by some feminists as a show of opposition or indifference to gender equality. These people will ignore Sanders’ policy record and accuse him of trying to “silence” Cox’s female voice. They will fail to see what’s really going on–this is a candidate who cares deeply about the concrete suffering that government policy can directly influence. He is trying to get people to talk about those issues and the policies that could address them, and instead they keep talking about his identity as a socialist white man, his rhetorical style, and the way he presents himself.

And this brings us to the crux of the difference between Trump and Sanders. Both Trump and Sanders see the direction our politics is going–increasingly, no one pays attention to policy at all. What voters are really looking for is a candidate who presents him or herself convincingly as someone who cares about people like them, who talks the right way about the right stuff. If Clinton can present herself better than Sanders on race or gender equality, it doesn’t matter that Sanders has better policies and a more robust record of doing things about race and gender. If Trump can present himself as more of an ordinary person, as more hostile and bellicose than Bush or Rubio or whoever, it doesn’t matter that his policies are poorly evidenced and don’t make sense and that in reality Trump is a billionaire who has nothing at all in common with ordinary folks. Trump embraces this trend in our politics–he takes full advantage of it and in the process, he does us the service of exposing it for all to see. Sanders resists this trend–he keeps trying to get people to have the serious policy debates we perhaps once had in decades past. Sanders knows that outrage and invective get more attention than good policy. He has the optimism to try anyway–to think that maybe, if people hear his message, they’ll support him. Despite all the evidence to the contrary, Sanders still believes in people. Trump is the ultimate cynic. That’s the difference.

But the pundits don’t get that. Why? Two reasons:

So the steady decline in our discourse marches on.

15 Comments to “Why Lazy Pundits Keep Comparing Sanders and Trump”