August 4 is the blog’s birthday. Once a year, I permit myself to write a self-indulgent post about the state of the blog on or near the blog birthday. To date, I have maintained my promise to only do this once annually. I have no intention of regularly subjecting my readers to my banal self-reflections.

In sum, it is principally for me, but I hope you enjoy it as well. If you are particularly interested in the history of this blog, please check out the previous iterations in this series:

Despite the significant increases, my production is not quite as high as it used to be. I wrote 115 posts this year, down from 150 a year ago. That’s a decrease of 23%: 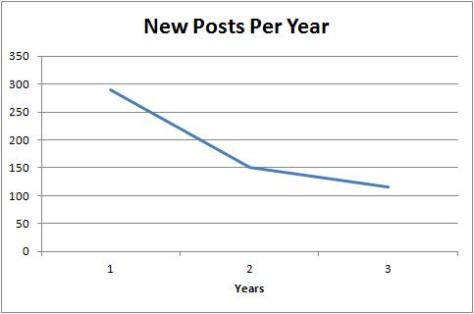 I hope what I’ve lost in quantity I’ve made up for with improvements in quality.

I have 555 total posts, excluding this one:

Over the last year, I think my average post has gotten a little bit longer. If my average is around 1,200 words per post, then I’ve written something like 666,000 words in the last three years on this blog. That’s roughly about as many words as the entire Lord of the Rings series, The Hobbit, and Harry Potter and the Prisoner of Azkaban all put together.

Of the five, I am most proud of the viral post for bringing so many new readers from all over the world to my blog. It is by far the most significant thing I have written so far and dwarfs everything else. The magnitude of the audience I was able to reach with that post continues to blow my mind. I hope to write something one day that makes that post feel as small and insignificant as that post makes the rest of my current work appear.

I usually also post the five most popular posts of all-time, but there is little reason to do that this year because the top 4 are the same. I will however share the two posts with bigger cumulative totals than the “America Works” post:

Interestingly, the Young People post received only around 800 hits in the last year while the Stag post picked up almost 5,000. The Stag post continues to perform better every year, which is quite bizarre–most posts fizzle out eventually, picking up only a handful of additional hits over very long periods.

Sometimes I really like one of my posts, but it doesn’t really catch on. Here are five posts from the last year that I think deserve more love:

I can also laugh at myself–here are the five biggest duds of the last year:

I really can’t blame you guys for ignoring Jim Gilmore, but some of those surely weren’t that bad?

Even so, none of those duds were anywhere near bad enough to make the all-time bomb list. These bombs did so badly that I have to go to a special place on WordPress to find out just how bad they still are. At this point, I’ve written so many posts that there’s no room left to show the worst performers on WordPress’s all-time hits list:

These bombs sometimes have a number of likes from other bloggers, which means a high percentage of the people who do read them like them, but for whatever reason they choose not to share these posts with their friends on social media. Shares are really valuable–even with the increases to my follower count, I can only get so many readers from my initial share. If readers do not go on to share my stuff themselves, my posts will still fizzle out rather quickly.

This year I will be starting my PhD at the University of Cambridge’s Queens’ College. This means that academic work will again begin competing directly with the blog for my time and mental energy, but I know from my first year that this does not necessarily mean that my number of posts will decrease. In Year 1, I wrote 290 posts while also writing an undergraduate thesis and a number of assessed essays, so it is entirely possible that the post count could hold steady or even increase. I will be more intellectually stimulated, so assuming I have time I will probably have more ideas for posts and my output will favor theoretical and philosophical content more. I will also be in the UK rather than the US for much of this coming year, so British current events will likely play a larger role in the output. If you’re an American who likes my work on US current events, don’t despair–when I was last in the UK, I kept myself well-informed about the goings on in the states and wrote about major US news events regularly.

To my regulars out there, both new ones and old ones, I want to thank you all so much for continuing to read what I write. I consider it an honor that you choose not only to read to the end of my lengthy posts, but that you return to read me again and again. I respect that you have only so much time and energy to invest in reading political material, and it is immensely gratifying to me that you continue to deem me worthy of that time. I hope my future output continues to be a worthy investment.