Cuba: Why Obama Made the Right Call

US President Barack Obama has decided to normalize relations with Cuba. Since 1960, the United States has attempted to isolate, weaken, and ultimately destroy the Castro regime by cutting off diplomatic ties, imposing a trade embargo, and preventing American tourists from visiting Cuba. Given that the US has been following this strategy for 54 years but the Castros remain in power, it’s reasonable to question the efficacy of that policy. So let’s look into it.

First, let’s be clear about what Obama is doing. Here are the core changes the administration is making to the US-Cuba relationship:

This is a completely different strategy from what has gone before. Prior to this, the US tried to damage Cuba’s economy to generate discontent in Cuba, with the hope that the Cuban people would overthrow the Castros. Now, Obama wants to treat Cuba more or less the same way the US has treated China since Richard Nixon began restoring diplomatic ties in 1972. By encouraging Americans to trade with China and interact with the Chinese people, the government hopes that the Chinese will come to desire the American lifestyle of their own accord and choose to copy the American system out of admiration. So far, that strategy has not worked politically–China is still run by the CPC. However, it has generated a dramatic shift in Chinese economic policy. Today the CPC is communist in name only, and China is a highly stratified and deeply capitalist society. In international relations theory, this sort of strategy is called”engagement”.

Conservatives like Charles Krauthammer use the Chinese case to argue that engagement will generate economic changes, but not political ones. For that reason, they argue that we should continue to isolate Cuba. It’s not stated, but the implication of this position is that the US should treat China, Vietnam, and other nominally communist states the same way that is has previously treated Cuba. China is the US’ #2 trading partner (Canada is #1), so that kind of policy would be very controversial.

The trouble is that the embargo strategy has been around for a very long time. It has not caused the regime to change policies and it has not caused the Cuban people to change the regime. What it has done is deny American businesses the opportunity to make money, stifle Cuba’s economic growth, and kept the Cuban people poor. Using data from the World Bank, we can see how Cuba has fared compared with the other countries it economically resembled in the early part of Castro’s rule, when the embargo first took effect:

As we can see, all of the Latin American countries that were in Cuba’s neighborhood in 1970 have now decidedly passed it except for Jamaica and Peru. That said, the regime has still been able to remain competitive in other areas. It’s 2nd among these countries in life expectancy (after Costa Rica): 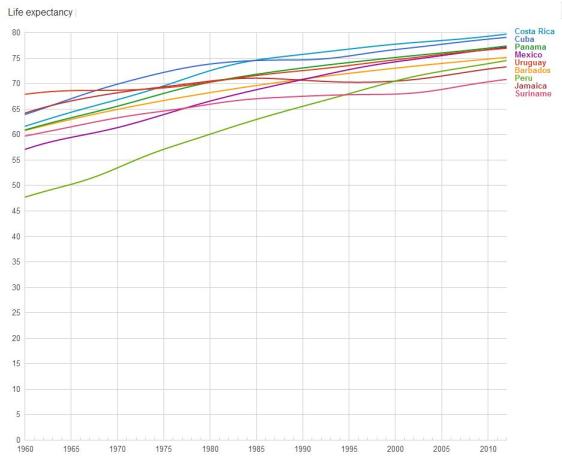 Cuba has also managed to keep unemployment down:

Inflation hasn’t run out of control either:

And for the last two decades, the Cuban economy has never entered a recession:

And it’s done this without generating a lot of debt–Cuba carries less debt relative to the size of its economy than most western countries. The upshot of all of this is that while the embargo has succeeded in restricting Cuba’s growth rate, the Cuban government has nonetheless been able to make the Cuban people feel that they are enjoying incremental steady progress. Over the last couple decades, there has been no instability. Cubans live long, they don’t lose their jobs, and while their incomes don’t rise quickly, they also never fall. Throw in the tropical weather, and the Cubans don’t have all that much to complain about economically. In relative terms, the average Cuban is always better off than he was 4 years ago, even if he remains much worse off than the average Costa Rican in absolute terms. As a result, the Cuban people continue to back the government, embargo or no embargo. And when Cubans do complain? The regime can blame any problems that arise on the US embargo, deflecting criticism.

Indeed, by forcing Cuba to find ways to survive economically without the United States, the embargo has shielded Cuba from the ups and downs of the global capitalist marketplace. This has helped Cuba avoid the economic catastrophes that often trigger political legitimacy crises. So in that respect, the embargo has made it easier for the Castro regime to survive. As long as it can deliver growth and distribute that growth equitably among the Cuban people, most Cubans have no reason to seek the regime’s overthrow. The population just isn’t sufficiently concerned about the political liberties the Castro regime denies them.

Krauthammer is right that Obama’s engagement policy is not likely to result in any immediate political changes in Cuba. The Castro regime is not going to voluntarily cede power to a liberal democracy. However, if the United States is able to get the Cuban people hooked on American products, this may result in economic liberalization. That would mean higher average growth rates for Cuba, but it would also mean a return to the boom and bust cycle–Cuba would once again be subject to the devastating effects of economic crises. These crises might generate the kind of political discontent that is just not possible at present and lead to the dissolution of regime. The trouble with that strategy is that it requires the US to wait for an economic crisis to happen, and those events are rare and unpredictable.

The US has been engaging China since the 1970’s, and China has grown much faster as a result. But China has not yet experienced a crisis of sufficient severity to threaten the legitimacy of the regime. Like China, the Cuban regime may continue to survive as long as it can sustainably deliver economic growth. It may take decades before a crisis of sufficient severity happens. But by engaging Cuba diplomatically and economically, the Obama administration increases the likelihood that Cuba will become more capitalist, more crisis-prone, and consequently less stable. If the goal is regime change, engagement is not a great strategy, but it’s a better strategy than the embargo.

Should the goal be regime change in the first place? The Cubans seem to like their government well enough. While their system isn’t what most Americans would choose for themselves, there’s no significant threat that the Cubans will inflict serious harm on America or force it to change its regime. The Soviet Union is dead, and the United States is simply too powerful. Even if the Castro regime endures for a thousand years, the United States only harms its own businesses by refusing to trade with Cuba. America can let Cuba do its own thing and make money doing it.  It’s a win-win all around. Trade with Cuba–regardless of what regime is running the country–is in the US national interest. Score one for Obama.

3 Comments to “Cuba: Why Obama Made the Right Call”