The 4 Strategies Available to the British Left

After getting thrashed in the election, Britain’s Labour Party is gearing up for a leadership contest. This provides us with an opportunity to talk about the different strategies open to the left and the potential consequences of each. There are four that stick out to me:

Let’s talk about each one.

As we all know, the Miliband strategy failed. Why did it fail? By conceding the need for austerity, Labour played right into the hands of the Tories. Labour hoped that British voters would fear that the Tories would cut too deep, but instead voters worried that Labour was too soft-hearted to cut deep enough. Labour presented itself as all heart and no head, and this made it look unserious, incompetent, and wishy-washy. The Tories were permitted to argue that it was Labour’s soft-heartedness that got Britain into its economic mess, and Labour had no cogent answer for this beyond accusing the Tories of being nasty and vicious. When push comes to shove, voters prefer a viciously competent party over a party full of sentimental bumblers. This is especially true of British voters, who are more inclined to mock idealism and emotional passion than they are to climb aboard the hope-and-change express. Labour cannot win elections if it continues to be seen to be inept on economic issues.

So Miliband is out, and the left will try something different. But where do we go from here?

Some people think Labour needs to go backwards if it wants to go forwards. These folks rightly recognize that Labour’s perceived economic incompetence is a serious problem, and liken it to the problem Labour experienced in the 80’s and 90’s. The Tories continually blamed Labour for the economic difficulties of the 70’s, and Labour was unable to convince the electorate that a leftward turn would end in anything other than economic disaster. The Blair strategy is simple–if you can’t beat ’em, join ’em.

There is no doubt in my mind that Labour could win elections in the future if it renounced major left wing planks of its manifesto and adopted an economic position that was much closer to that of the Tories. This would make Labour look competent and serious, and many British voters would be more likely to vote for a Labour party that seems competent and serious. But there are two key problems with this:

Consider this chart from the World Top Incomes Database:

Labour takes power in 1997. You’ll notice that the 1%’s income share dips slightly in the early 00’s, when the US stock bubble burst, but after that the 1%’s share begins rising at an even faster rate than before. By the start of the recession the average rate of increase in the 1%’s share was about the same under Labour as it was under the Tories from 1979 to 1997.

This indicates that Labour did not even manage to hold inequality steady–the problem got worse under Labour, and it may have gotten worse under Labour nearly as fast as it got worse under the Tories. So if you’re on the left, what good does the Blair strategy do? It gets your party into office, but it guarantees that nothing will be achieved once it gets there.

Nevertheless, party leaders want to be in office. They forget that the point of holding office is achieving good political objectives, that it is a means rather than an end. Many Labour politicians came of age during the Blair era. They aren’t especially strong believers in left wing economic policies and arguments, and dumping them seems a small price to pay for a chance at governing. So there is a serious risk that Labour will run back to the Blair strategy. Already, we have seen the shadow chancellor pull the plug on the 50p tax rate, and the most competitive candidates for the leadership espouse strategies of this kind.

There is, however, one dark horse candidate for the leadership who has something different in mind–Jeremy Corbyn.

If you’ve read this blog, you know that the anti-austerity position is supported by compelling arguments and evidence. In a good democracy, we would be able to make these arguments and persuade people to reject the Tory economic narrative. Corbyn supporters believe that many people would be ready and willing to back Labour if Labour only bothered to make a robust case for itself.

But would it work? I doubt it. In 1983, Labour decided to make a robust stand for left wing principles, putting out a strong manifesto that rejected austerity. Here are a few snippets from it:

The present hideous level of unemployment is not an accident. It is the direct result of the policies of this government. The Tories have cut public investment and services, and increased taxes, taking spending power out of the economy and destroying jobs in both public and private sectors alike. They have forced up interest rates and kept the pound too high – a combination that has crippled British industry, and helped lose us markets at home and abroad

Our approach is different. We will expand the economy, by providing a strong and measured increase in spending. Spending money creates jobs. Money spent on railway electrification means jobs, not only in construction, but also in the industries that supply the equipment – as well as faster and better trains. If we increase pensions and child benefits, it means more spending power for the elderly and for parents, more bought in shops, more orders for goods, and more jobs in the factories. More spending means that the economy will begin to expand: and growth will provide the new wealth for higher wages and better living standards, the right climate for industry to invest, and more resources for the public services…

Given our commitment to increase public spending, it is right that people should ask: how will we pay for it? It would be wrong to finance the initial boost to spending by increasing taxation. Only if ours was a fully employed economy would this be the right way of doing it. But our economy today is chronically under-employed. We have people out of work, idle plant, and unused savings. To finance expansion by increasing taxation in these circumstances would be wrong. For the increased spending in one part of the economy would be cancelled out by decreased expenditure elsewhere. Of course, once the economy gets much nearer to full employment, some taxes will have to be increased, both to shift the tax balance towards those who can best afford to pay, and to help finance our social programme.

Like any other expanding industrial enterprise, we shall borrow to finance our programme of investment. This is better than borrowing, as the Tories are doing, in order to pay for the dole queue or to provide finance for the Argentine government to buy arms.

There is no shortage of savings in the country available for borrowing today. Indeed, vast amounts of British money – more than the government’s total borrowing requirement last year – are flowing into overseas investment. For with our present slump, there is not the demand for investment here.

But the scale of borrowing will not be nearly as great as the increase in spending. Spending generates new income and new savings. As the economy recovers we shall be able to spend less on keeping people unemployed. And when people get jobs they will also pay income tax and spend more on goods which are taxed. Last year benefit payments, and tax revenues foregone – because of unemployment – cost the nation some £17,000 million.

This is a sound economic argument, and it is every bit as true today as it was in 1983. Of course, British political aficionados know that this comes from the infamous “Longest Suicide Note in History“. The fallout was swift. Centrists in the Labour Party split off, creating the Social Democratic Party, which joined an alliance with the Liberals. In the 1983 election, the Conservatives won a smaller percentage of the votes than they won in 1979, but because Labour split votes with the SDP-Liberal Alliance, the Tories gained a further 58 seats, and Labour lost 60: 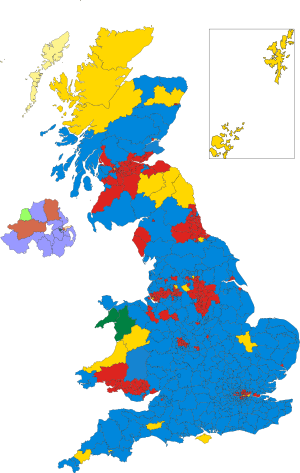 The Tory argument is very simple–they accuse Labour of being unrealistic and profligate. They say Britain has to make hard choices, and Labour is too pie in the sky to make those choices. This sounds serious and pragmatic, and people who don’t have economic expertise are very likely to buy into it. Most journalists don’t have economic expertise, so the media tends to develop a strong bias in favor of the right wing position. In a good democracy, there’s a level playing field and the best ideas can win. In a real democracy, the idea that sounds simple, pragmatic, and realistic wins even when it’s wrong. Most people don’t develop their own political ideas in any detail, they borrow those of others, and the people they borrow from tend to be the people who talk about hard choices and make a point of looking serious and dour.

But at least Corbyn is trying to stand up for left wing principles. He’s to be admired, and it’s better to have someone who continues to carry the torch for correct side of the argument than it is to have someone who abandons principles, gets into government, and then proceeds to govern just like a Tory. On this blog, I’ll continue to make the case against austerity and against inequality, even though I don’t think it’s likely that I or others like me will persuade enough people to change future electoral outcomes. A permanent vocal minority keeps the discussion going. Silence and abdication only serves to aid and abet the further solidification of the shift to the right.

But in the meantime, there is something else the left must do.

Deride him if you like, but Russell Brand is doing something really important. He recognizes that there are no good electoral strategies available for left wingers, and he’s asking a question we all need to ask–why.

This is not unique to Britain–in the United States, we have our own Jeremy Corbyn in the form of Bernie Sanders. Sanders is the only US presidential candidate that will call for major wealth redistribution, single payer healthcare, and all the rest. But Sanders will almost certainly lose in the primary to Hillary Clinton, and if he got the democratic nomination he would almost certainly lose to the republican nominee.

In both cases, it is because our political systems are an omnishambles. There are key structural problems that no one is doing anything meaningful to solve:

The individuals and parties that win elections have no incentive to address these problems because they are the beneficiaries. Anyone who stands a realistic chance of winning will do nothing at all about any of this. If we’re going to change this stuff, we need to change the fundamental structure of the political system, and we need to figure out how to do this without winning elections and without embracing the violent totalitarian ideologies we despise far more than any Tory government.

My fellow political theorists, we have a job to do.

8 Comments to “The 4 Strategies Available to the British Left”