Britain: For the Love of God, Please Stop David Cameron

On May 7 (this Thursday), Britain has a general election. I care deeply about British politics–I did my BA over there and will return to do my PhD there this fall. But more importantly, David Cameron’s government has managed the country’s economy with stunning fecklessness, and I couldn’t live with myself if I didn’t do my part to point this out.

Let me tell you the story of what happened in Britain and how David Cameron made everything much, much worse.

So in 2010, the British elect a coalition government led by the Conservative Party’s David Cameron. Cameron immediately begins doing austerity–he cuts government spending to in an effort to reduce the debt. The trouble is that when government spending is reduced, this cuts the legs out from under economic demand. Cameron cut benefits, salaries, and reduced subcontracts putting less money into consumers’ pockets. Here we can see the composition of UK economic growth during the Labour government as compared with that of the conservatives:

The International Monetary Fund (IMF) subsequently came out with a paper stating that the multiplier (the effect of government spending on economic growth) had been massively underestimated. Then it got worse–the IMF revealed that because the multiplier is so large, austerity shrinks the economy enough to cancel out debt relief. Let me be clear–austerity reduces growth so much that it undercuts government revenue and prevents governments from shrinking their deficits. I wrote about this at the time. It was and remains shockingly clear evidence that austerity was and is failing even to reduce debt and deficits. The UK is in a significantly worse fiscal position than it was in 5 years ago:

The UK performed worse than France, a country that the Wall Street Journal accused of “descending into ridiculousness”. In the first two years, Cameron’s government put up numbers that were worse than Spain’s. Spain is a basket case–even today, Spain has an unemployment rate over 20%. Had it maintained the trajectory it was on from 2009-2010, Britain could have been doing as well as Germany in 2012.

Now, Cameron isn’t completely foolish–he slowed down the austerity after the first year:

In the first year, spending fell by about 2% of GDP. Cameron halted austerity in the second year to fight off a double-dip recession, reintroduced it at about the same pace in the third year, and then cut the pace in half for the 4th and 5th years. Consequently, Britain’s economy has started showing signs of life:

But rather than admit its error, the government now claims that these are the good results austerity was going to bring all along. This is clearly misleading–even with the growth post-2012, the UK remains behind France, and the US and Germany are still far ahead:

What the numbers really suggest is that Britain could be much further along now if it had avoided austerity to begin with. But voters have short memories, and because the British economy has been improving since the austerity slowed down, the conservatives remain electorally competitive:

To be clear, Cameron’s Conservative Party is in blue. The Labour Party is red, hard-right UKIP is in purple, the centrist liberal democrats are orange, and the hard-left greens are, obviously, green.

This is disturbing, because the Conservative Party promises to continue cutting government spending by a further 2% over the next two years if it is returned to power. This would not be as fast as the rate of cutting from 2010-2012, but it would be faster than the rate from 2012-2014. This will only serve to hinder British growth further.

According to Oxfam, the government’s austerity policies have devastated Britain’s middle and working classes in a variety of ways:

Indeed, when we adjust for inflation, British workers have seen continual reductions in their wages over the course of this parliament:

And as university students should remember, the conservatives raised university tuition fees to £9,000 per year (roughly $13,600 by today’s conversion rates). This means that a British university student must now pay more to go to university than an in-state American student–for instance, Indiana residents pay only $10,388 in tuition to go to Indiana University. Before 1998, British students went to university for free. Society benefits from a well-educated population and well-trained workforce. It remains an obscene injustice to pass this cost onto young people. It deters students from pursuing degrees, particularly those degrees that are less financially lucrative.

In sum, this austerity serves no economic purpose–its exists because the Conservative Party wants to cut the welfare state so it can reduce taxes on the rich and for no other reason.

The Labour Party has done a bad job of attacking austerity–indeed, it promises to prioritize cuts as well. There are however two key differences:

This is not by any means an ideal alternative–Labour has done little to combat the Conservative Party’s narrative that the debt poses an existential economic threat to the UK. Austerity is not an effective way to fight debt, but Labour has not challenged this claim and as a result it has become part of what ordinary British voters consider common knowledge. As a result, it has become impossible to be taken seriously in British politics if one does not promise significant spending cuts. Even the Greens are promising to focus on the debt, though their manifesto calls almost exclusively for tax increases. This is remarkable, considering that UK borrowing costs are at historic lows, indicating a high level of confidence in the UK’s solvency (and a low level of confidence in its future economic trajectory): 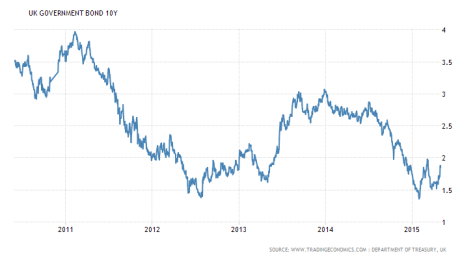 But nevertheless, it means that for British voters, there really is no way out. They can trust Labour austerity to be less damaging for poor and working people, and they can hope that Labour will see the error of its ways and change its policies faster or more quickly than the Conservative Party would, but that’s about it. This is still significant–the UK will be better off if Labour wins–but things could be so different, if only British voters were better informed about what has been going on.

This post has gone semi-viral–it’s by far the most popular post I’ve written to date, and it’s receiving a lot of attention. As a result, it’s become impossible for me to keep up with the comments, and I know there are many places it’s being shared where I’m not around to defend it or explain the finer points. So I’ve written a follow up post, entitled 13 Terrible Tory Counterarguments, which addresses the most popular negative responses I’ve seen on the internet over the last few days. If you share Please Stop David Cameron and someone gives you grief, send them to the relevant part of Tory Counterarguments, and hopefully my response will prove adequate. As far as the comments thread here goes–there’s just too many, and if I try to do what I normally do (which is patiently respond to each and every one of you) I will not be able to keep up and will spend my whole day on the computer. I want to thank all of you for reading and sharing. Who knows, maybe it will be shared enough by May 7th that it will actually make a difference? It’s not likely, but you never know.

937 Comments to “Britain: For the Love of God, Please Stop David Cameron”