Today I had a lecture that introduced an interesting idea, one I think worth sharing and discussing–universal basic income (hereafter referred to as UBI). UBI is a radical alternative to the present welfare system existent in most western countries. In most societies, welfare is conditional on a demonstration of effort to gain employment–it has a work requirement. UBI proposes that the work requirement be scrapped and that welfare be provided to all citizens irrespective of need so that everyone has a sufficient standard of living such that employment becomes a life choice rather than a life requirement.

The two central questions for me when I look at this (or any idea really, come to think of it) are:

The former is question of normative ethics, the latter a question of practical implications. Obviously, the answer to both questions needs to be “yes” in order to support a given idea or proposal. So let’s examine the answers to these questions with regard to UBI.

UBI is sufficientarian, it provides a minimum sufficient living standard for all. There might be some left critiques of UBI that argue that it should go further in the name of equality of wealth or aiding the worst off, but those people would still agree that UBI is preferable to the existing welfare system. For the purposes of keeping this discussion within bounds, I will assume for our purposes that UBI and the current system are the only two choices–this lumps egalitarians and prioritarians in with sufficientarians against the political right (for further discussion of egalitarian, sufficientarian, and prioritarian positions, see “Why the Welfare State“)

So what would the political right’s primary ethical objection be to UBI? The same objection the right raises to all redistribution and welfare schemes–exploitation. Not the Marxist exploitation of the working class, mind you, but the exploitation of the rich for the benefit of the poor. The right points out that some people under UBI could choose to be idle and that the rest of us would have to pay to sustain that idleness through labour.

There are a few defences of UBI to the right’s critique:

Both are, in my view, good defences.

The most persuasive normative ethical argument for UBI is making work an option–it not only ensures that people are compensated for doing non-traditional work (child rearing, charity, and so on), it also gives people autonomy, a sense of choice, and some dignity. Imagine, for instance, if prostitution were legal (it is in many places), and a person was expected to take on that job if offered or risk losing benefits? Some kinds of labour could easily be viewed by quite a lot of people as degrading to their self-respect and self-esteem–is scrubbing toilets really any better than prostitution in any meaningful way? I certainly can imagine some people who would consider both deeply unpleasant, and many other “jobs” similarly undignified.

Of course, this brings us to the question of whether or not UBI would work in practise. There are some on the right who mount an economics challenge to UBI on the basis that UBI would result in a large scale lack of motivation to work and consequently a far less efficient and productive economy. This could be said to be a right utilitarian critique of UBI, arguing that UBI would damage total social utility.

This argument is however open to a left utilitarian response from the Keynesian angle. Here’s how that argument works:

Now, the right’s response to this is likely to point out that these companies won’t be able to hire as many workers if they have to pay them higher wages. There are two responses to that, however:

On top of all of this, there is a decent economics argument to show that wages are not currently sufficient to maintain supply sustainably and that they really ought to go up: 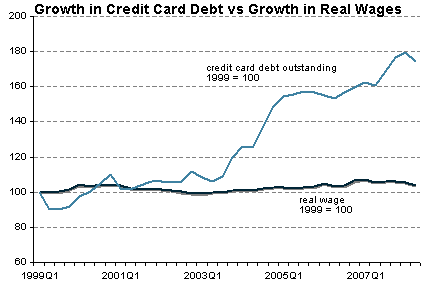 Increases in access to credit are being used as a replacement for wages increases–that serves in the long-run only to put people into debt and to lead to economic crises. The right answer is to push wages up, and UBI does do that. I think it’s fairly conclusive that UBI is better than what we’ve got running, though I’m sure the left could have a fantastically fun internal debate as to whether or not UBI represents the ideal welfare state in absolute terms.

Interestingly, a study was done in Canada that seems to confirm that the disincentive to work generated by UBI is far more minimal than is commonly thought.