A Left Critique of the Current Protests

There are a number of problems with the strategy of the current protest movement. No one seems to be writing about these problems. This is not to say that no one can see them. Many folks have reservations, but stay silent in the hope that the protests will succeed. Others see the problems but fear that pointing them out will attract hostility from fanatics on the internet. The problem is that the strategy is not just sub-optimal–it is counterproductive. It is going to blow up in our faces, and the sooner we face up to that, the better. Here’s why.

These protests began with the killing of George Floyd, and were initially about getting justice for him. George deserves justice, but the problem with building a protest movement around the wrongful killing of a single individual is that once justice is obtained for that single individual, the movement is likely to run out of steam. “Justice for X” is an easy demand for the state to meet. All the state has to do is arrest and eventually convict the particular officers involved in the killing.

Activists rightly recognised that “Justice for George” wasn’t a sufficiently robust demand. They have been trying to leverage the protests into a wider critique of the criminal justice system, and especially the police as an institution. “Abolish the Police” is their preferred objective.

The problem is that the “abolish” slogan doesn’t give us a clear alternative vision for how to secure order. Many activists have many different ideas for what might replace the police, but there is no clear consensus around any singular replacement. It is impossible to forge a clear consensus because the activists are mostly of anarchist bent, and therefore their organizations lack a clear leadership structure.

Many of the anarchist proposals largely ignore the reasons that the police became a one-size-fits-all solution to social problems. Other public services have gradually been run down over decades of budget cuts. As our schools, our welfare programs, and our social services have declined, increasingly strung-out American citizens have turned to a variety of poor coping mechanisms. We have huge numbers of people taking opiates and huge numbers of people pressed into gangs to supply those addicts. We have many people who are increasingly isolated and lonely, who are deeply alienated from our society and harbour a lot of resentment. These distressed Americans have acquired an immense number of guns. We cannot expect our citizens to follow the law when they grow up neglected by their own government. We cannot stop lawbreakers who are armed to the teeth without arms of our own. As we gradually run down the quality of our public services and desocialize our own people, we create a heavily militarised form of law enforcement to protect us from the mess we are creating.

Other rich countries don’t have our problem. Their police hardly ever kill anybody: 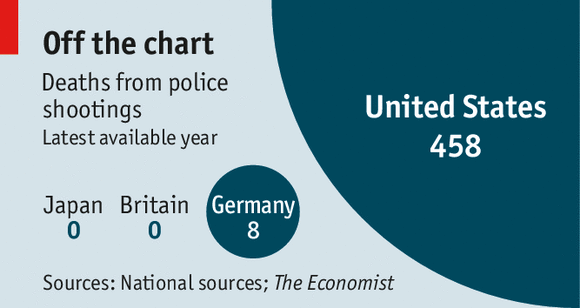 Their citizens aren’t armed to the teeth and their public services haven’t been cut to the bone yet. Their police don’t have to do combat with an increasingly heavily armed, heavily alienated population. Ours do. That’s why our police are absurdly militarized. That’s why our police kill. Their police are just as racist as ours, but they don’t carry lethal weapons because they don’t have anything serious to fear from their civilian populations. British cops would probably disproportionately kill black people, if they killed people in the first instance. The thing is, they don’t.

As long as we have millions of alienated, armed Americans, the police will never be abolished. Calls for their abolishment will instead result in privatisation. The Democratic mayors who run our cities want to avoid responsibility for the killings that are the result of decades of their own negligent policy. Privatising the police divests them of culpability. Privatised police will be even less accountable than publicly run departments. They’ll probably kill even more people. But when it happens, the cities can blame it on the contractors. They can simply fire one outfit and hire another. The anarcho-capitalists have wanted this for ages. They are chomping at the bit to use these protests to make it happen.

To avoid this move, there’s been an effort to shift the demand from “abolish the police” to “defund the police”. But this still leaves open the question of what programs will replace the police, at a time when our civilian population is more alienated and armed than ever before. There are many individuals with good ideas for replacement programs, but it isn’t possible for the best ideas to get a fair hearing because the protest movement lacks firm roots in civil society organizations. Most of the organizations which claim to represent the protesters have no credible basis for making these claims. The protests have no nationally famous charismatic leader, and most of the participants are not members of any singular leading organization.

The people who are best organized and most capable of taking advantage of the protests are the yuppie, bourgeois professionals. Many of these people have bachelors degrees in various social science and humanities disciplines, and their primary objective is to create jobs for themselves. They use the deaths of African-Americans as a business opportunity, demanding that companies employ them to run diversity training programs or hire them to diversify an endless series of government and corporate boards, commissions, and panels. These “woke neoliberals” always succeed in co-opting these protests, because they went to the same universities and speak the same language as the people who work for governments and corporations. They claim to offer diversity, but they succeed in getting positions because they are just like the people they aim to replace in every way that matters.

Frantz Fanon called them the “black bourgeoisie”, but today they come in many colors. They attack capitalism not because they want to do away with it but because they want to run it themselves. They deceive poor and working people into supporting them, and once they acquire power they run the system the same way the “white” bourgeoisie ran it. They don’t care about funding social programs that work–they just want to get paid.

As long as the yuppies are in charge, these protests won’t address the root causes of police violence–the alienation that drives citizens to commit violent crimes and the armaments which make violent crimes so easy to commit. As long as the root causes go unaddressed, frightened police officers will demand ever more elaborately lethal counter-armaments, and they’ll fire those weapons all over the place. We can replace them with private para-military groups, but that will just make a bad situation worse.

Meanwhile, Donald Trump will point to every violent moment, no matter how small, no matter who committed the deed, and make the old Nixonian case for “law and order“. Wherever possible, he will try to use these protests to divide people and pit white workers against black workers. Trump rushed to antagonise the protesters, calling them “thugs” and pledging to “dominate” the streets. This language is purposefully incendiary–it aims not at extinguishing the protests, but at extending them. Trump wants them to go on, because he wants us to analyse US politics through a racial lens, because the racial lens helps him rally his base. This president campaigns almost exclusively for his base and makes little effort to reach out. If he wins again, it will be in part because so many of his core voters will fearfully rush off the polls, hoping he will protect them from the violence they see everyday on TV.

If he doesn’t win again, a Biden victory on the back of these protests will fuel a revival of the woke discourse that was so prevalent in the period immediately prior to Bernie Sanders (c. 2012-2015). Barack Obama’s second term saw an outpouring of demands for racial justice, but those demands also produced a right nationalist backlash. If Biden wins the presidency using this approach, we can expect the backlash to intensify, and the Republican Party will move even further right in the years to come. Trump uses nationalist rhetoric to win elections, but the next Republican president might genuinely believe in this stuff. It’s imperative that we change the conversation–a more intense version of the discourse that prevailed in the second half of the Obama presidency can only lead to more intense versions of Trumpism. The ever-intensifying culture war continues to move the Republican Party further and further right, and if we don’t change the conversation we will continue to follow an all-too-familiar path. Sanders briefly showed us the way toward a better conversation–one which centres around universal rights to healthcare, education, and other public goods. In moving back into the cultural and racial binary, we are abandoning his hard won discursive progress. If this continues, the word “socialist” will come to mean what the Republicans during the Obama years always wanted it to mean–the woke neoliberalism of mainstream Democrats.

We need to continue the work Bernie started. But with the coronavirus cutting into the revenue and budgets of our state and local governments and with Joe Biden leading the Democratic Party, it is very hard right now to credibly make the case for expanding public services. For now, all we can do is attempt to protect our remaining social programs from the austerity axe that is coming to cleave them in two. At best, we might be able to use these protests to direct the axe away from other places it might land–like our schools.

But even this victory will be Pyrrhic if the price is a move back into the pre-Bernie discourse. We have been slowly backsliding into the morass of the culture war for the past several years now, and this could be the moment when that backsliding becomes permanent and irreversible. If so, we are in for another decade of cultural antagonism between liberals and conservatives, fuelling ever more aggressive forms of nationalist revanchism. This is a dangerous game, and it is one we are very likely to lose. Sadly, our organizations are inferior to the organizations of the anarchists and the woke neoliberals, and for this reason they will continue to hasten the victory of the right nationalists, much to our chagrin.