Which was the first state to industrialize? Britain, of course. Was Britain an agricultural powerhouse? No. British agricultural output was very low compared to most continental European states and blocs:

When other countries began looking to industrialize, they had to deal with the fact that Britain had a head start. Their nascent industries could not compete with Britain’s on an even footing. They had to use tariffs to protect their manufacturing sector from British competition. Britain would respond with reciprocal tariffs on the continental powers’ agricultural exports. The European farmers would complain about lost business and pressure their governments to rescind the tariffs, perpetuating British industrial dominance. In other words, the British would use the European farmers to weaken their rivals. In countries with strong agricultural sectors, the farmers had more political influence, which means their resistance to protectionism would be harder to overcome.

Writing in 1841, the economist Friedrich List tells the story of how Britain did this to the Portuguese and then to the French and the Germans:

In the year 1703, after the death of Count Ereceira, however, the famous British ambassador Paul Methuen succeeded in persuading the Portuguese Government that Portugal would be immensely benefited if England were to permit the importation of Portuguese wines at a duty one-third less than the duty levied upon wines of other countries, in consideration of Portugal admitting English cloths at the same rate of import duty (viz. twenty-three per cent.) which had been charged upon such goods prior to the year 1684. It seems as though on the part of the King the hope of an increase in his customs revenue, and on the part of the nobility the hope of an increased income from rents, supplied the chief motives for the conclusion of that commercial treaty…Directly after the conclusion of this treaty, Portugal was deluged with English manufactures, and the first result of this inundation was the sudden and complete ruin of the Portuguese manufactories—a result which had its perfect counterparts in the subsequent so-called Eden treaty with France and in the abrogation of the Continental system in Germany.

Britain offered to buy agricultural products–in this case, Portuguese wine–if its counterpart lowered import duties on manufactured goods. The Portuguese nobility, which owned far more agricultural land than it did heavy industry, took the short-term payoff at the expense of the long-term development of their country’s economy.

The same thing, of course, happened to the United States with cotton. Tariffs on British manufactured goods were followed by tariffs on American cotton, and the Southern planters would constantly vote to undermine the North’s industrial strategy. List exclaims in frustration:

What benefit is it to the people of the United States, for instance, that they sacrifice the welfare of their finest and most cultivated states, the states of free labour, and perhaps their entire future national greatness, for the advantage of supplying England with raw cotton?

On this system the trade with England only tended to promote the agricultural labour of the American slaves, while on the other hand, the freest, most enlightened, and most powerful States of the Union found themselves entirely arrested in their economical progress, and thus reduced to dispose of their annual surplus of population and capital by emigration to the waste lands of the West.

He condemns the 1832 compromise, in which America conceded to Southern demands to weaken the tariffs:

by means of the influence of the cotton planters and the importers, and by the aid of the Democratic party, especially by means of the so-called Compromise Bill in 1832, a modification of the former tariff had taken place, which, although it certainly amended the excesses and faults of the former tariff, and also still secured to the American manufactories a tolerable degree of protection in respect of the coarser fabrics of cotton and woollen, nevertheless gave the English all the concessions which they could have desired without England having been compelled to make any counter concessions. Since the passing of that Bill, the exports of the English to America have enormously increased.

Even today, when Donald Trump imposes tariffs on foreign manufacturers, the political cartoonists rightly portray American farmers as the victims: 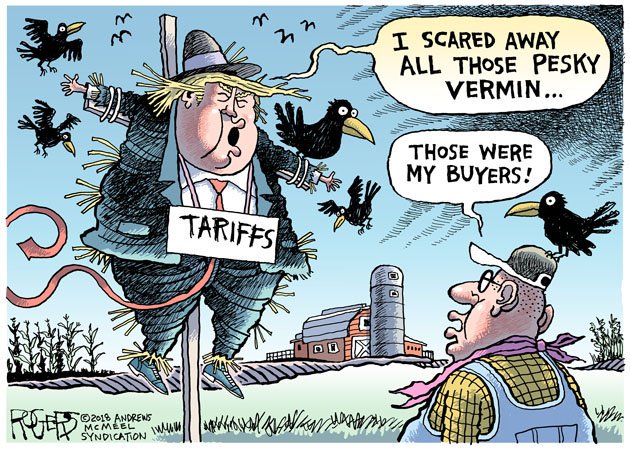 So it beggars belief that the New York Times would now lazily ask us to believe there was some kind of harmony of interests between Northern industrialists and Southern planters. Why do they imagine the North endeavored to end slavery? It was not simply a moral crusade–it was also about breaking the power of the planters so the industrialists could impose the powerful tariffs they long coveted. Immediately following the Confederate insurrection, gargantuan tariffs were imposed:

Tariffs would not return to their pre-Civil War levels until the 20th century, when American manufacturing was securely established.

The narrative that capitalism and chattel slavery go hand in hand is attractive at a time when many are trying to fight the twin evils of economic exploitation and institutional racism together. But it’s a narrative which neither reflects economic reality nor the common opinion of writers and commentators in the 19th century. The Northern and Southern elites had deeply conflicting economic interests, and this is a big part of why the Northerners and the Southerners killed each other.

The production of raw cotton got in the way of American economic development, just as the production wine got in the way of the development of France and Portugal. The only way to overcome the political obstacles presented by the cotton industry was to destroy it, and the best way to destroy the cotton industry was to emancipate the slaves that were necessary to operate it. The moral argument against slavery and the economic argument against cotton went hand in hand.

All of this can be acknowledged without in any way diminishing the repulsiveness of slavery and racism. The southern model was morally disgusting and economically inhibiting.