My name is Benjamin Studebaker, and I grew up in Indiana. I am not happy with the way the press is covering Mayor Pete Buttigieg. Let me tell you why.

Long ago, our family made wagons. When folks wanted those wagons horseless, we started putting engines in them. We built these horseless wagons at a factory in South Bend, Indiana. We shipped them out on rail lines, both east and west. We started up in 1852, and operations wound down at the South Bend plant in 1963. At one point, we employed more than 45,000 people. In the Studebaker century, South Bend became a city:

We were first by far with a post-war car. We were the big new choice in the low-price field.  We were different by design. We made beautiful things:

Most importantly, we offered the best wages and pensions in the industry, with nary a strike at the South Bend plant until we were on our last legs in 1962. United Auto Workers came to us first, and used the favourable terms they’d get from Studebaker to negotiate better deals for workers at GM, Ford, and Chrysler plants, too. But we never had their size or production capacity, and as the Big 3 used their market share to push prices down to a level too low for us to manage. We were pushed out of the low-price field, and then we were pushed out of the sports car market, too. In the decades following the collapse of Studebaker, South Bend lost 30,000 residents: 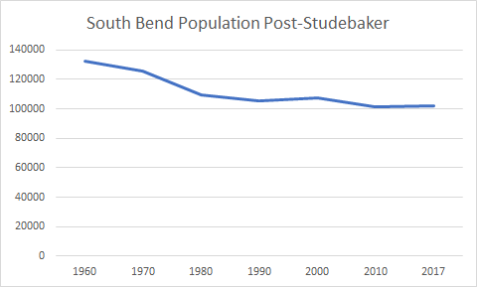 The press acts as if Pete Buttigieg has done something to revive this city, but as you can see the population remains largely unchanged from when he took office in 2012. An immense amount of poverty and misery continues to grip the city, in comparison to its county, to its state, and to the country: 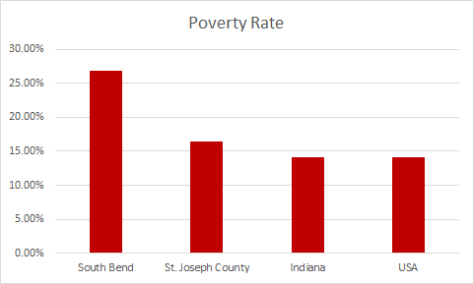 Even those above the poverty threshold earn poorly in comparison with everywhere else:

In his book, Buttigieg derides the “moribund Studebaker corridor”, promising to make South Bend into a “Silicon Prairie” with “data centers and start-ups”. But despite seven years in power, there are relatively few such jobs in the city. Only 1.5% of South Bend’s jobs are in the computer and mathematical sector, and the occupation is listed as one of South Bend’s “least specialized”, meaning that it has dramatically fewer workers in this sector than most places in America.

Instead, the city has increasingly become an appendage of Notre Dame, a wealthy Catholic private university. The people who once upon a time might have worked good union jobs at Studebaker now work increasingly in the “food and serving” sector, whipping up fancy coffees and craft booze for the rich kids. It’s not only one of the city’s five biggest sectors, unlike “computer and mathematical”, “food and serving” is a South Bend speciality. The median person employed in this sector is paid $13,400 per year. Another heavy hitter is the large and specialized “healthcare and social assistance” industry, which pays a marginally better $25,612.

Poverty and low incomes push residents into crime. A resident of South Bend is more than three times more likely to be murdered than the average American, twice as likely to be raped, and three times more likely to be robbed or assaulted. In the years Buttigieg has been in power, the public schools have continued to lag behind Indiana averages in reading and science, pushing a whole new generation of residents into poverty, low wage employment, and criminality:

The educational gaps are heavily racialized–75% of white students are proficient in reading compared to 46% of black students, while 71% of white students are proficient in science compared to just 29% of their black counterparts. All races, however, put up inferior numbers in both subjects in comparison with your average Hoosier kid. The local newspaper, the South Bend Tribune, reports the schools get “F” ratings by Indiana’s standards. And as we all know, Indiana’s public schools aren’t anything to run home about. The state spends less per pupil than all of its neighbors–including Illinois, Michigan, Ohio, and even Kentucky.

Studebaker created jobs for ordinary people. What has Pete Buttigieg done for the poor and working people of South Bend? The numbers suggest he hasn’t done anything. What he has done is threaten low income homeowners with financial penalties if they don’t make their homes prettier in a bid to push up land values and gentrify the city. If they couldn’t pay, Buttigieg seized their homes and ripped them down. But don’t take my word for it–here’s how the Indianapolis Star describes it:

By leveling fees and fines, the city leaned on homeowners to make repairs or have their houses demolished. In many cases, Buttigieg said, the homeowners proved impossible to find amid a string of active and inactive investment companies. In other cases, he said, they were unwilling or unable to make repairs.

Studebaker gave South Bend’s workers jobs. Buttigieg took their homes. Studebaker hired South Bend’s workers to make cars for ordinary Americans. Buttigieg wants to hire them to make lattes for rich kids. The Americans who need a big new choice in the low-price field won’t find a friend in Buttigieg. He’s not different by design. He’s just another Ivy League McKinsey consultant looking to find ways to make the world a little bit better for rich folks and a little bit worse for everyone else.

But the coastie press doesn’t talk to the people who lost their homes because Buttigieg doesn’t think they’re pretty enough. Instead, it just keeps reporting on how “smart” he is and how many languages he speaks. Buttigieg doesn’t give a damn about people, and neither do they. The Studebaker family is big, and I don’t speak for all of it. But in my view, he’s not curing South Bend of its sickness–he embodies the rot. Notre Dame gets bigger, and the ordinary people who built the city are forgotten. It’s not good for South Bend, and it wouldn’t be good for the country.