How and Why Slavery Got Abolished

One of the things I find odd about the American discourse about slavery is how rarely Americans think about slavery as an institution which existed outside America. Not only did slavery exist in the ancient world in a pre-racialised way–in which many slaves were white, and many masters were people of colour–but it also existed in many other places during the period in which it existed in America. In many of these places, slavery was abolished not by violence but by ordinary politics. Yet this is rarely acknowledged or discussed, and it is increasingly common for Americans to frame our history largely in terms of the slavery question. We don’t often ask why slavery was more contentious in the United States than in other places. That’s what I want to think about with you today. Among the great powers of the 19th century, the United States was alone in needing to fight a civil conflict over the slavery question. All the others were able to abolish it through law alone. In 1815 the Congress of Vienna–including Britain, France, Russia, Prussia, Austria, Spain, Portugal, and Sweden-Norway–declared its opposition to slavery. In the decades that followed, slavery was outlawed by many leading states:

Often times it’s claimed that the American south would never have given up its slaves peacefully, but this is precisely what occurred in most places. Slave traders and slave owners were criminalised in nearly all the powerful states without much bloodshed. When Americans argue that a war was necessary to end slavery, they will often claim that slavery was the engine of economic growth and that slave owners could use their wealth and power to resist any attempt to use the democratic institutions to get the job done. But slave owners were not powerful enough to protect slavery in other places. Even non-democracies, like the Austrian, Russian, and Ottoman Empires, turned against the practice.

So what happened in other countries? Slavery and serfdom perished in large part because they were not very efficient. Capitalism–with its accompanying employer/employee wage labor relationships–makes it possible to relocate workers from the farms to the cities to work in factories. These factory workers lived lives that were in many senses quite miserable, but they were not chattel slaves. They did not belong to anybody. This made it possible to lay them off quickly when it became necessary to cut production. It also meant they could quickly find new work when other firms and industries were growing and developing. Marxists condemn this new employment relationship as “wage slavery”, but it was never recognised as slavery by the great powers. On this view, a more efficient but marginally less brutal form of slavery displaced the older form.

You see this in the United States–in the free states, capitalist wage labor relationships were free to develop in place of master/slave relationships. The result is that the north industrialised more rapidly and quickly became economically much stronger than the south. The slave states frequently impeded this development by opposing protective tariffs which the north needed to defend its nascent industries from British competition, and by helping to elect presidents with no understanding of modern finance who would therefore inadvertently precipitate unnecessary recessions. Consider for instance Andrew Jackson, who was elected primarily with the support of rural states which at the time did not have a significant industrial base: 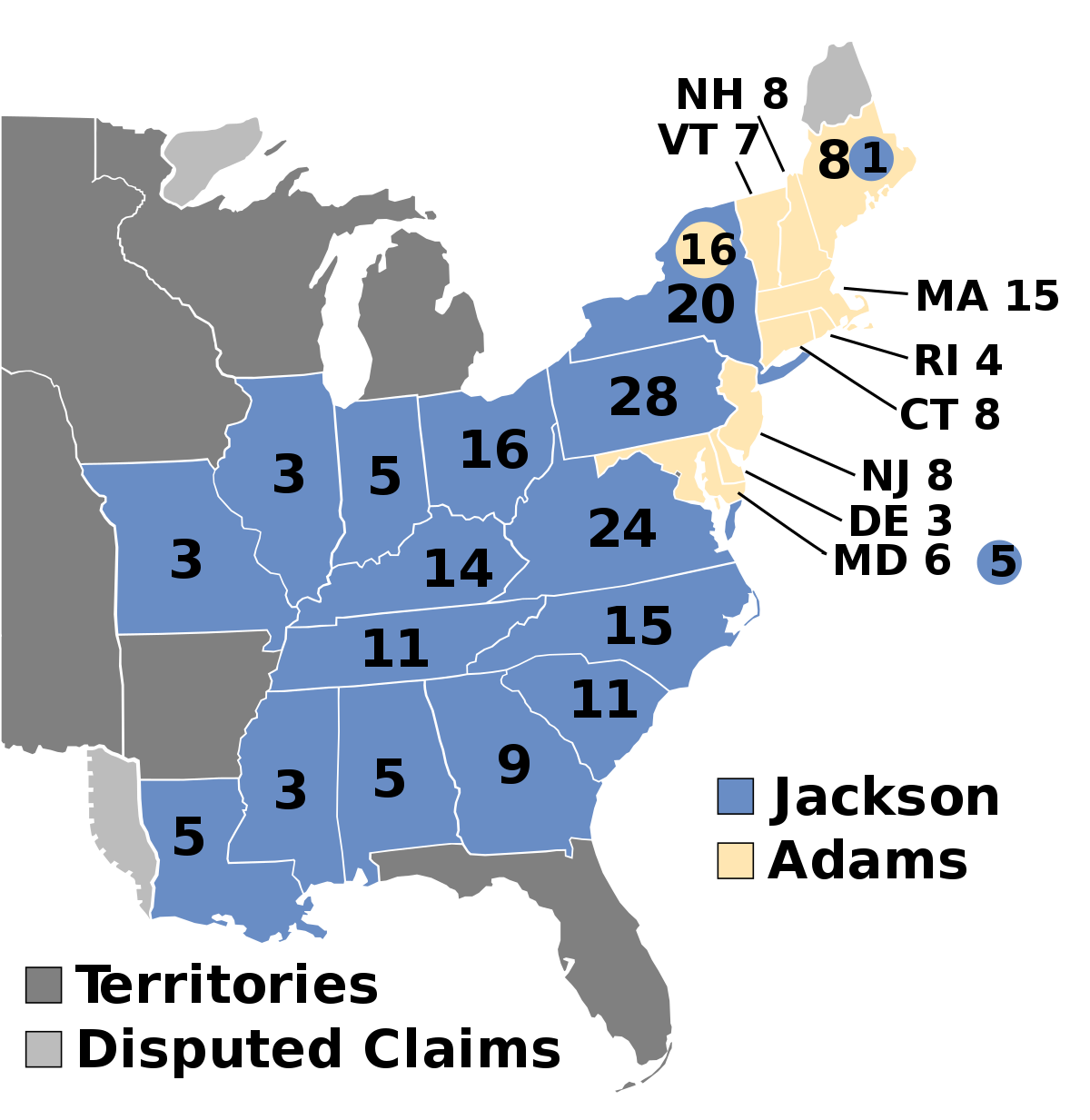 Jackson knew nothing about economics and late in his second term he abolished the Second Bank of the United States, resulting in the Panic of 1837. This led to a decade of depression and retrenchment:

Presidents like this were not very helpful in developing the country–they did not understand and could not manage the industrial sector, and their failures slowed things down. Some might argue that the revenue from American agricultural exports nonetheless supported investment in northern infrastructure. But other states, like France, were able to retain highly competitive agricultural sectors long after the demise of slavery, and the north frequently sought out a tariff policy that it knew would diminish the competitiveness of southern exports. It simply wasn’t particularly efficient to use slave labor in the 19th century in the rich states, and when it was used this tended to fetter industrial development. The states that abolished slavery and serfdom earlier–like Britain, France, and Prussia–outperformed the states that took longer to do this, like Russia and the Ottoman Empire. The same thing is mirrored in the American regions–during the American Civil War, confederate soldiers frequently ran out of bullets. They simply lacked the industrial output to keep up with the north.

Why, then, was a civil war required to end slavery in America, but not in other parts of the world? The difference is largely institutional–the United States is the only power in this period to feature federal institutions and slavery at the same time. Federal institutions divide power among regions, making it difficult for a federal state to pursue policies that strongly favour some regions at the expense of others. The other European powers were unitary states and therefore the central government could more easily make decisions which prioritise the interests of urban industrialists over those of rural landowners. Indeed, there was a strong incentive to do this to ensure that these European powers could field competitive armies, as a competitive army increasingly needed a strong industrial base to provide it with adequate munitions to carry out long wars. The states that abolished slavery and serfdom later and therefore industrialised more slowly also became less economically competitive, and therefore less militarily competitive.

Many Americans still resent the federal institutions on some level because of the way they relate those institutions to slavery. In the south, the federal institutions are charged with having imposed changes which southerners feel they had no right to impose by force. In the north, many Americans mistrust institutions like the senate and electoral college in part because of their historical role in blocking the northern cities from abolishing slavery through peaceful means. But other states which adopted federalism after having already abolished slavery do not view federal institutions through this lens. Countries like Canada and Australia in no way associate having federal institutions with institutionalised slavery. Federal institutions aren’t intrinsically bound up with slavery or racism–but they do make it harder to make changes that are fiercely opposed by large regions, even if those regions are smaller in population or economic output than the regions seeking the change. In the context of the early 19th century, slavery was such a change. But when the federal systems in Canada and Australia were constituted, slavery was already out of the picture and therefore no such association exists.

So when theorists argue that our institutions are shaped by slavery in some indelible way, they are kind of missing the point. Federalism isn’t inherently pro-slavery. It just makes change harder, because it requires a wider consensus before it will permit any reform to go through. American abolitionists were understandably unwilling to wait for such a consensus to develop, and the result was the Civil War. But it is hard to see how this could have been avoided, because many states–including many free states–were not willing to ratify the constitution without measures which would protect them from domination by the powerful, prosperous states. Originally it was Virginia–a slave state–that called for all seats in congress to be allocated based on population, while New Jersey–a free state–opposed the move. So the simple narrative that our federal institutions were constructed mainly around the slavery question misses quite a bit of the story. The small states didn’t just fear domination by New York–they also feared domination by Virginia. They feared America would up like a European state, in which economic development is concentrated around the capital and the outlying regions are largely ignored. The unitary European states were forged through war and conquest, with the outlying regions subjugated by the core. The Americans did not want to construct the country in that way, and built the federal institutions in an attempt to avoid that. Today they might fear ending up like the European Union–where Germany runs the show and frequently makes economic policy that damages the interests of weaker states like Greece or Portugal. This–not slavery–is the principal reason we have things like the senate and the electoral college. These institutions made the slavery question more difficult to resolve, but they were not created principally to protect it. That’s a reductive contemporary misreading.