But unlike other progressive groups, DSA has to contend with internal factions that are very seriously wedded to a certain strain of socialist ideology—one that emphasizes, as Karl Marx did, a churning class war that governs the history of humankind. For these socialists, an anti-capitalist movement must be anti-racist, since capitalism has been instrumental in the subjugation of minorities. But they are also weary of liberal politicians who, they say, exploit race to pander to minority groups, all while skirting the deeper class conflict at work. In the past year, these hard-liners have clashed on numerous occasions with other socialists, often minorities themselves, who contend that righting America’s unique wrongs requires an approach distinct from the universal precepts of historical materialism—one that emphasizes racism’s special impact on inequality, supra-class.

Notice the language Salazar uses. This “internal faction”–comprised of “hard-liners”–is “very seriously wedded” to “a certain strain” of “ideology”. This language is intended to make historical materialism sound extreme. Beyond this, Salazar spends almost no time unpacking what historical materialism is, describing it rather simply as belief in “a churning class war that governs the history of humankind”. By describing materialism in this flippant, straw-mannish way, Salazar further distances it from the realm of normal, reasonable politics.

Outside of this paragraph, the Salazar piece is preponderantly journalism–interviews with particular people. Salazar doesn’t seem to think it’s worthwhile or useful to engage further with the ideas of the “hard-liners”. Most of the folks he quotes don’t argue with historical materialism as a set of ideas, but repeatedly dismissively associate it with whiteness. The materialists are a “white mob”, they privilege “white identity”, and they are into “white saviorism.” Salazar describes the DSA as “preponderantly” or “mostly” white over and over.

Salazar does acknowledge that some of the people who support materialism are people of colour, but he also associates materialism with DSA “leadership”, claiming that the “rank-and-file” members oppose it, even though rank and file DSA members elect the DSA leadership. At one point, he quotes Nation‘s description of these leaders as the “most explicitly Marxist”. There is no discussion of what makes these people Marxist–this seems to have been thrown into the piece because Salazar knows that people think Marxists are radicals and he wants to denormalize the DSA leadership.

When pushed on this, Salazar points us to a tweet Rachel Cohen posted in his defence:

1. The article focuses on exactly what the written response acknowledges is the real problem: that members disagree on how best to fight racial oppression, esp. in a majority-white org. (Note how "implies" is a lot of work here.) pic.twitter.com/wpcBVIpuoN

Cohen argues that Salazar never explicitly claims that the materialists and Marxists are racist–he is merely describing a disagreement. Here Cohen is attempting to position Salazar as a neutral journalist. Salazar himself also attempts to position himself this way:

a heated, sometimes nasty intellectual debate, often conducted in the kind of dogmatic jargon that was once a hallmark of Marxist academia

Clearly Salazar doesn’t like Marxist academics or intellectual debates. At any rate Salazar is unwilling (and perhaps unable) to put those debates into language his readers can understand. The intellectuals and academics produce quotes Salazar would have to explain. The “rank-and-file” members Salazar interviewed say quite straightforwardly that the DSA is a “white mob”. Salazar is a journalist. Journalists are good at telling stories about corrupt leaders and the noble ordinary people who stand up to them. Political theory isn’t their strong suit, and if political theorists won’t put their ideas into soundbites journalists will ignore them–or worse, position them as nefarious ivory tower Leninist usurpers.

So let me tell you in layman’s terms what this debate is really about. Materialists–like Marx–think that conditions produce ideas. Idealists–like Hegel–think that ideas produce conditions. For materialists, racism came about because Europeans encountered people of colour and discovered that they could easily enslave and subjugate them. The Europeans wanted to explain why it was possible for them to do this and justify continuing to do it. Racism provides an apparent explanation and justification for European oppression. The Europeans can oppress people of colour because they are stronger, and they are stronger because of racial superiority. Notice how, for the materialist, the fact of oppression precedes the justifying ideology. The Europeans start oppressing people of colour before they come up with racism as the justifying explanation. So to get rid of racism, this oppression must first be eliminated, and to eliminate oppression it’s necessary to eliminate the disparity in wealth and power which makes it possible in the first place. In practice, this leads materialists to heavily prioritise redistribution. By contrast, an idealist will argue that the idea of racism precedes racist oppression. Therefore we need to change what people believe before we can change their behaviour. So for idealists, we have to educate people, raise awareness, have a “conversation”, and so on.

The New Republic has made it very clear where it stands in this debate–its recent cover is transparently idealist in its orientation, with its focus on “unlearning hatred”: 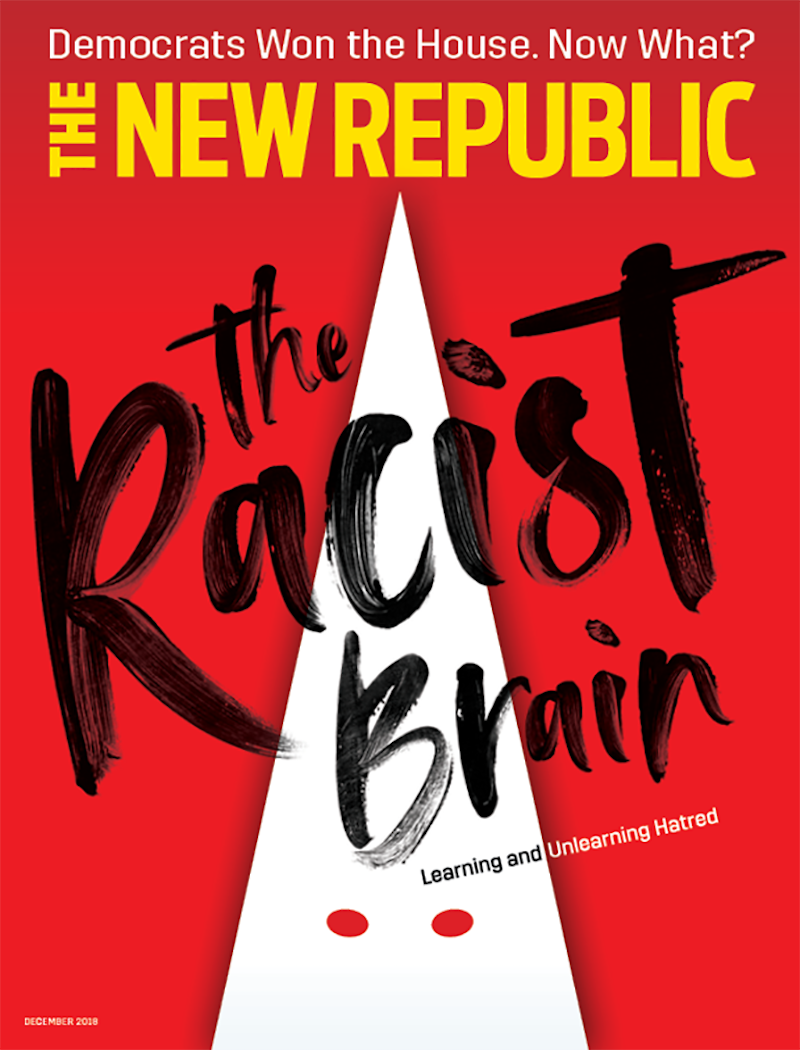 The materialism versus idealism debate older than Marx and Hegel themselves. People on the left have argued about this forever. It’s a chicken/egg question. What comes first–economics and politics, or culture and ideas? Most people will freely admit that there’s some level of feedback between the two, but the practical question of whether we should prioritise redistributing wealth and power or educating people is unavoidable and there are deep strategic costs to answering it wrong. We need to rigorously debate this stuff. But we can’t do this when there are people like Salazar making two unacceptable moves:

It shouldn’t surprise us that Salazar is discourse policing. If you are an idealist, you have to police the discourse because you think that the discourse becomes material reality. If we are permitted to make materialist claims without being labelled racist, Salazar thinks that people might really become materialist. Most idealists don’t agree with John Stuart Mill, who famously argued that the discourse is self-cleaning and that bad ideas will tend to be outcompeted by good ideas. Instead, they tend to agree with Plato, who argued that the ideal city would expel all the poets because poetry corrupts the youth. Replace “the poets” with “the racists” and “expel” with “deplatform” and you’ll have the right idea.

Materialists don’t have to worry so much about discourse policing because they think ideas can only win out if conditions are favourable. For materialists, capitalism produces socialism by changing conditions so much that they contradict capitalist ideas. For instance, if we automated most of the economy, it would be hard for people to continue to believe that we should only receive money for paid work, because there would be so little paid work to go around. The idea that we should work for what we get only appears to make sense in a world in which work is widely available. Change the availability of work–i.e. the distribution of work–and you change the way people think about work. Materialists don’t have to be so worried about what idealists believe, because they expect that when conditions change, people’s beliefs will change with them.

When we talk about “hard-line” left-wing “ideology”, I suspect most people are more worried by idealists who want to tell them what to think and believe than they are by materialists who want to give them wealth and power. When the right complains about “cultural Marxism” and “identity politics”, they’re talking about the idealist left’s discourse policing, not the materialist left’s free stuff and campaign finance reform. The right doesn’t agree with “free stuff”, but in practice it finds it hard to argue against–the most popular left-wing policies are those that promise people things. Medicare for all has 70% approval and tuition free college has 60%. But 80% believe that “political correctness” is a problem. The activists Salazar interviewed are out of touch with the country. Like so many pieces by journalists, the sample size is too small to tell us much of anything about what people believe:

Of course, these activists are idealists–so when they are confronted with this kind of data they don’t adapt to conditions and instead insist that this shows how important it is to educate everybody. They also tend to equate concessions in one area with concessions in all areas. They don’t pick their battles. So the very fact that I am encouraging them to strategically prioritise some issues over others makes me suspicious to them. Because materialism is interested in what kinds of change conditions permit and what kinds they don’t permit, idealists instinctively find materialists suspicious.

Worse, sometimes our idealist friends adopt certain elements of right-wing political thought. Many of them think that:

These “fallen idealists” have incorporated an awful lot of neoliberal thought into their own understanding of the political system, framing it in terms of individual choice and ghettoising political economy.

It is for this reason that materialists and righteous idealists increasingly refer to these people as “radical liberals”. There is little to distinguish them from mainstream liberals like Hillary Clinton aside from their positions on social issues and discourse policing. Yet they are constantly trying to get socialist organisations–like DSA–to pursue strategies which have very little to do with socialist economic policies and institutional reforms. Liberal publications, like The New Republic, think that socialism is a bit dangerous and are more than willing to enlist their journalists in encouraging radical liberalism within DSA. Either the rad libs take the organisation, or they hinder it and prevent from having wider influence. Both outcomes serve the interests of Win McCormack, the rich guy who runs The New Republic. McCormack served on Gary Hart’s 1984 campaign–Hart was an early proponent of 3rd way centrism in the Democratic Party. Under McCormack, the magazine has developed a reputation for repeatedly dumping on Bernie Sanders. All the while, it claims to be a “progressive” voice. Most of what it writes about the left is concern trolling.

But if you dress that concern trolling up as neutral journalism, you can get away with a lot. You can claim the views you’re presenting are just reflective of the lived experience of the people of colour you interviewed. You can slip a bunch of implicit digs in at one of the factions, and dismiss the arguments they present as obscure Marxist jargon. You can, and you must–because Win McCormack writes your checks, and he demands his pound of lefty flesh.

See, your employer matters. Because materialism is true–conditions determine ideas more than the reverse. If they pay you and you need their money, they own you.