George H.W. Bush was the Last of the Postwar Republicans

In the days following the death of former President George H.W. Bush, there have been a lot of obituaries with different takes on his legacy. The left has tended to criticise his Cold War foreign policy interventions and relationship with the CIA and its activities. The right has praised his handling of the Gulf War and the breakup of the Soviet Union. Both these kinds of takes have focused on Bush’s foreign policy legacy. I want to focus on a different part of the story–Bush’s position in domestic politics as the last Republican president in the postwar tradition of Dwight Eisenhower. 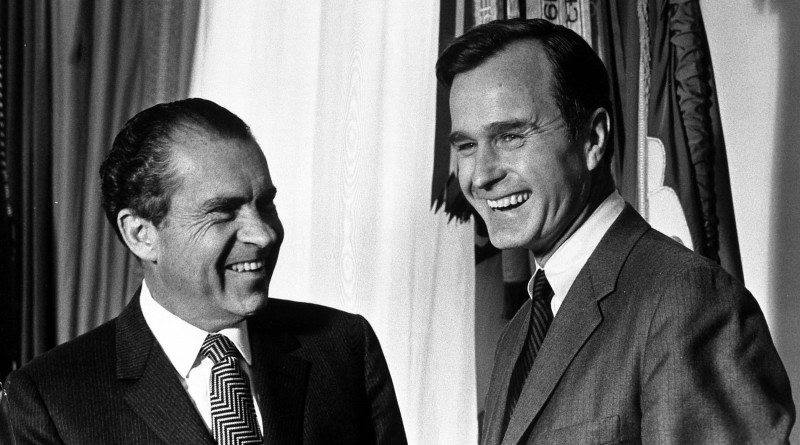 One of the underrated achievements of Franklin Roosevelt was the realignment of the Republican party for half a century. In the 30s, 40s, 50s, 60s, and 70s, the Republican Party was forced to concede the necessity of having a federal state that took an interest in promoting full employment, in protecting the environment, and in promoting social progress. There’s a reason political scientists sometimes call this era the “postwar consensus”–on most of the major issues of this period, there was relatively little difference between Truman and Dewey, Eisenhower and Stephenson, or Kennedy and Nixon. The Democrats were more creative with domestic policy than the Republicans and placed a bit stronger priority on full employment than on whipping inflation. The Republicans were considered to be a bit more hawkish–though ultimately, it was Eisenhower who ended the Korean War and Nixon who ended Vietnam. But in this period, the parties were more similar to each other than they were different, and consequently it was often possible for presidents to work with congresses controlled by the opposing party. Eisenhower and Nixon never controlled the House (with a brief 2 year exception in the mid-50s) and all their domestic legislative successes came with Democratic cooperation. Ike goes down in history as the guy who built the interstate highways–Nixon goes down in history as the guy who founded the Environmental Protection Agency.

These Republicans were brutal in their execution of the Cold War abroad, but by contemporary standards they were teddy bears at home. Despite his rhetoric, Nixon did a lot of work desegregating our schools. Despite his military history, Eisenhower gave a speech denouncing the military industrial complex.

In 1968, Ronald Reagan ran for president. He came first in primary voting. But he came third at the convention. Why? Because postwar Republicans thought Reagan was a moron. Nixon, in particular, hated the guy:

It shows you how a man [Reagan] of limited mental capacity simply doesn’t know what the Christ is going on in the foreign area.

Reagan was defeated by Ford in the 1976 primaries too. And all the while, do you know who Nixon and Ford were promoting? George H.W. Bush. Nixon picked him as ambassador the UN. Nixon made Bush RNC chairman. Ford made him liason to China. Ford made him CIA director. Bush was a Nixon/Ford guy. He was first elected to congress in 1966, during the thick of the postwar years. Bush believed in all the postwar stuff. And when he ran for president in 1980, he intended to run the country the way his former bosses did.

But Bush had a problem–Nixon beat Reagan because of the convention system. Ford beat Reagan because Ford was an incumbent. Bush had neither of these things. The Republican Party base had grown steadily more right wing, and that meant in primaries Reagan was only getting more competitive with time. Bush condemned Reagan’s trickle down economics as “voodoo economics”. He stood up for Keynesianism. He lost anyway.

Reagan picked Bush to be Vice President as a sop to the old guard. When Bush ran for president in 1988, he talked like a Reaganite, promising not to raise taxes:

But he did raise taxes. Reagan lowered the top rate of income tax to 28%. Bush raised it all the way to 39.6%, completely reversing the last Reagan tax cut. When Barack Obama raised taxes, he raised them back to George H.W. Bush’s level. It’s the highest top rate of tax the United States has seen post-1983. 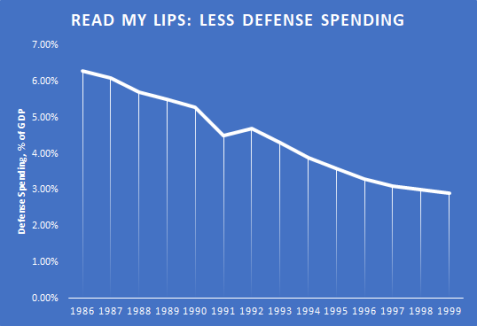 Bush did other postwar Republican things too. He signed the Americans with Disabilities Act in 1990. Following in Nixon’s footsteps, he expanded the Clean Air Act and more heavily regulated the oil industry to prevent spills. His environmental record is arguably stronger than Obama’s.

Bush paid a heavy political price for governing like a postwar Republican in the late 80s and early 90s. In the primaries, he faced a challenge from right-wing candidate Pat Buchanan. Then, in the general election, he was challenged by the billionaire 3rd party candidate Ross Perot. The lack of enthusiasm from the right and the strength of Perot’s challenge eroded Bush’s vote share–he secured just 37% of the vote in 1992.

The message from donors to Republican politicians was clear–if you raised taxes and tightened regulations, you couldn’t succeed in the Republican Party anymore. Bush’s son, George W., took these lessons to heart, governing well to the right of both his father and Ronald Reagan himself. The party of Donald Trump has merely taken another step down this all too familiar path.

George H.W. Bush was not a great president, and much of the criticism he has taken and will take will be deserved. He was unable to stem the tide of Reaganism, in his party or his country. Like all Cold War presidents he had a role in innumerable atrocities abroad. But Bush was the last of a dying breed of postwar Republican politicians. His presidency marked the final breaths of the Republican Party shaped not by Ronald Reagan, but by Franklin Roosevelt and Dwight Eisenhower. This was a party which understood that the environment mattered, that the federal government had an important role to play in people’s lives, that the Republican Party could not be in the business of vandalising the state.