How to Use Minimum Wage Laws to Improve Local Schools

What kills American towns are low income residents. Low income residents lower the amount of tax revenue local schools have per student, damaging school performance. As the schools decline, the affluent residents dry up, and that hits land values and median income, eroding tax revenue and further damaging the schools. Towns get into death spirals, where declining schools and collapsing prosperity feed off each other. Today I want to talk about how towns get thrown off this cycle, and how higher local minimum wage laws can keep them on track.

As schools attract affluent residents, those affluent residents want to buy stuff. Their money attracts businesses to move to the town. These businesses create jobs and generate tax revenue. The problem is that most of the jobs these new businesses create are in retail or food service. They pay terrible wages. Affluent residents wouldn’t be able to afford their homes if they worked in the jobs they attract to their towns. So instead these towns have to import low income workers from surrounding areas. Eventually developers realise they can make a killing building low income housing for these out of towners, and the out of towners start to move in. As they move in, they lower property values and median incomes and begin to strain the school system. Affluent residents attract businesses, and everything looks great–until those businesses bring large numbers of low income people to the town. Then everything begins to slowly fall apart.

Many affluent residents imagine that their kids can take after school or summer jobs at these businesses, but they have to be open during school hours. They can’t just run on local teens. In recent years, teen summer jobs have been on the decline–perhaps in part because the low wage jobs pay so little that teens can’t imagine these jobs making much of a dent in their ballooning student debts: Minimum wage jobs are increasingly worked by low income adults, and that means by people who are going to want to live in the towns they work in. Nearly 70% of all minimum wage employees are age 20 or older, and 45% are older than 24:

Would you want to pay for the gas to drive 20 minutes each day to a minimum wage job? Of course you wouldn’t. You’d want to move somewhere very local. So when towns create minimum wage jobs, they are planting the seeds of their future transformation into slums.

What’s more, we know that the number one thing American families fight about is money. It’s the leading cause of stress in relationships and families that fight about money tend to produce children who exhibit anti-social behavior. It’s harder for kids who grow up in a materially stressful environment to do well in school.

But there’s a way to stop this. If minimum wage jobs pay better, then the people who move to the town won’t hurt the tax base and the school budget so much. Stronger incomes means stronger families, which means more domestic stability for the children of low income people, better test scores, and stronger schools. When a town has a higher minimum wage than surrounding areas, employers get their pick of the best workers in the region, which means better job performance and better customer service. Well-run businesses make towns even more attractive to affluent residents. Low-wage workers will spend a lot of their enlarged paychecks locally at the very businesses that pay them. As a bonus, those teens who do choose to work after school and summer jobs will be able to make a bigger dent in their college costs, reducing their future debt burdens or reducing the need for their parents to pony up.

Some might worry that businesses might move away in response to a wage hike, but the kinds of businesses affluent residents attract–retail and food service–are highly sensitive to geographic location. If you want access to the wallets of the affluent residents of a strong town, you can’t really afford to locate far away. You can’t make fresh Amish pretzels in China to sell to Indiana residents. What’s more, there’s evidence that firms are doing very well, and have plenty of extra cash to share with workers. Corporate profits as a share of GDP are much higher than they were when older Americans were growing up in the 60s: The 60s featured minimum wages which were significantly higher in today’s money: 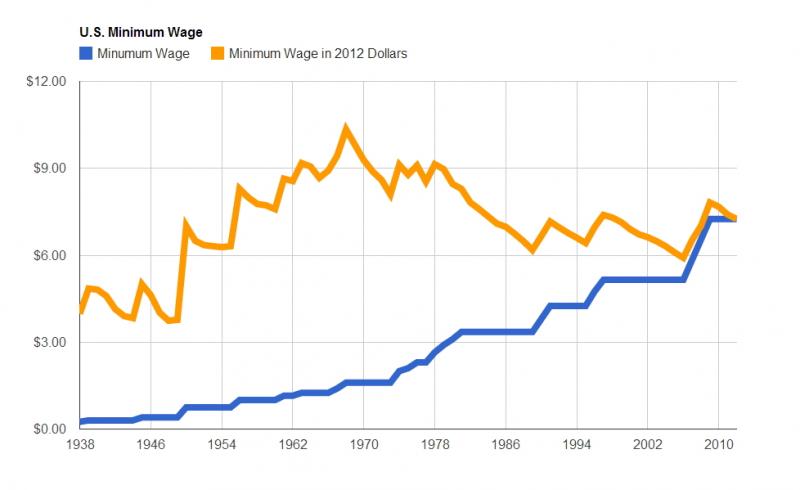 If the minimum wage had also been adjusted to keep up with productivity growth, it would be higher still–Pew estimates as high as $21 or more per hour. But towns in red states where the minimum wage is still only $7.25 wouldn’t need to go nearly that high to make a big difference.

A higher minimum wage reinforces the virtuous circle, and it costs towns and municipalities almost nothing to implement. It’s an inexpensive way to help sustain a strong town. At a time when our towns are receiving increasingly limited financial help from the feds and their home states, lifting the minimum wage–especially for retail and food service employees, who are immune to competition from Chinese workers–might be the best way a town can defend its schools and its prosperity in the years to come.