Arguments Against Minimum Wage Increases are Weaker Than Many People Think

Today I’d like to talk about the recent University of Washington study on the effects of the minimum wage increase in Seattle.  The study claims to show that the increase in the wage from $11 an hour to $13 resulted in lower wages and job losses for workers at the bottom of the wage distribution. But this study–and the arguments surrounding it–kinda miss the point.

There are all sorts of arguments which attack the validity of the Washington study. For instance, the Economic Policy Institute points out that the study excluded workers at multi-location chains, who account for about 40% of the Seattle workforce, and that it there are many other studies which have looked at similarly sized changes in the minimum wage with more favorable findings.

But let’s put all that to one side and assume the Washington study’s findings are true. All this would suggest is that the minimum wage works a lot like gun control. In the United States we constantly have arguments about whether gun control works, with skeptics arguing that criminals will find a way to get them regardless of the law. The thing is, these skeptical arguments are usually based on research done on US state and local gun control laws. There’s an obvious problem with state and local gun control–US states and localities don’t police their borders.

If the city of Chicago decides to do a gun ban, someone living in any suburb–Aurora, Gary, Joliet, Naperville–can simply fill up a truck with guns and drive it into the middle of Chicago, no questions asked. If you can’t control your physical border, it’s very hard to effectively control what comes in and what goes out. This has driven American cities nuts for years–they try to ban the guns, but the suburban and rural areas won’t ban them, and then people smuggle guns from the suburbs and the countryside into the cities.

Unlike Chicago or Illinois, national governments have much greater control over their physical borders. When countries with strong, effective law enforcement ban guns, it usually works out–homicide rates are much lower in rich countries with fewer guns per capita:

Now in the case of the minimum wage, the issue is not the physical border, it’s the economic border. Cities and states within the United States cannot restrict commerce with other localities and states. If you live in Chicago but you decide to go to Naperville to buy something, or you decide to order something from Aurora, there’s not much Chicago can do about that. If you live in Illinois but you decide to order something from a firm in Indiana, there’s usually not much Illinois can do about that either.

So let’s say I operate a warehouse in Chicago and the Chicago minimum wage goes up. Perhaps I decide to relocate my warehouse to nearby Aurora to escape the wage increase (if the cost of relocation is not greater than the wage increase, and if I can get just as much business by operating in Aurora as I can by operating in Chicago–two conditions that are not always and perhaps not even usually going to be met). If I do that, Chicago cannot hit me with a tariff. Indeed, Aurora might try to take advantage of the situation and offer me a tax break to move there. People are free to drive to my warehouse, or to order things delivered from there, regardless of where they live in the continental United States.

But if the American minimum wage goes up at the federal level, I can’t just run away to Aurora. To avoid that wage hike, I’d have to be willing to go overseas, at which point I’m subject not only to much higher shipping costs, but to the American economic border. This means depending on where I relocate I might be subject to tariffs or even trade embargoes. Countries can protect their domestic workers from wage competition from sweatshop workers in poor countries–if they choose to do so. Sometimes countries sign trade agreements that allow foreign states to gut their workers anyway, but that’s a political choice rather than an economic necessity.

Just like with guns, countries with strong control over their economic borders are often able to implement very different minimum wage policies resulting in very different real (inflation-adjusted) purchasing power. Consider for instance how long it takes people working at the minimum wage in different countries buy a Big Mac:

If we look at the rich, non-Euro countries in this chart, we see that their minimum wages do not correlate in any obvious way with unemployment, meaning that negative effects either do not exist or are small enough to easily swamp out with other factors: 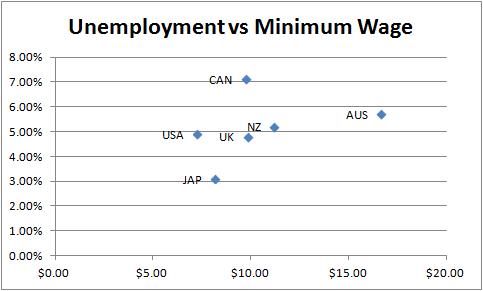 Australia already has a minimum wage above $15 with an unemployment rate below 6%. And its inflation rate? Right around 2%, the traditional Federal Reserve target:

We already know it’s possible to have a higher minimum wage with strong employment numbers and low inflation. The Aussie rate has been above $15 since 2010, and their Fair Work Commission continues to adjust it every year in line with inflation and economic conditions.

So if the Washington study proves right and the EPI and other critics prove wrong, all this would mean is that we need to change the implementation strategy for the minimum wage, focusing on: