Obama’s Legacy: The Evidence Beyond the Punditry

As President Obama’s term draws to a close, every political writer under the sun is offering a hot take on how he’ll be remembered. These can be fun to read, but they don’t tell you very much about what really happened while Barack Obama was president. So today I’d like to look at some of the evidence and data we have on this president. Let’s see how he stacks up next to past presidents and America’s friends and rivals. 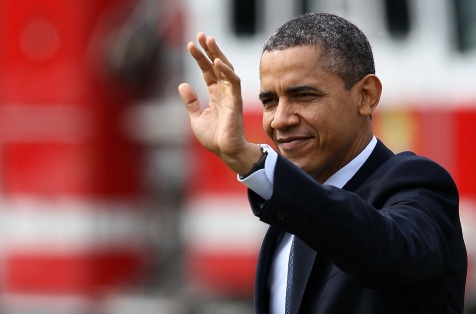 Here are the real, inflation-adjusted average annual growth rates of our presidents beginning with FDR:

In terms of raw growth rate, Obama is second from the bottom, just barely beating George W. Bush. The New Deal and Great Society democrats are the kings of this chart–Truman, JFK, and LBJ are the only post-war presidents to beat 5%. There does however need to be some context on this chart, because a president often faces economic conditions which are in part created by predecessors or foreign powers. A few things to note:

Here’s the change in top 1% income share from the beginning of each president’s term to the end: 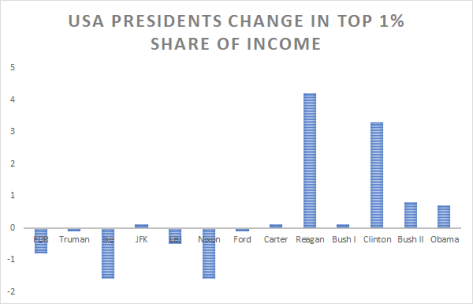 This US data set is newer than what I’ve used in the past–it reveals that Nixon is the best recent president on inequality. Obama is fourth from worst, after Reagan, Clinton, and George W. Bush. On this chart, Truman, JFK, and LBJ are somewhat hurt because they delivered on very high growth rates. Higher growth generate higher returns on investment and make it more difficult for administrations to maintain an economic distribution which can continue to provide the demand necessary to continue to fuel growth going forward. Yet all three produced better distributive figures and better growth than both Reagan and Clinton–a testament to the strength of the redistributive policies that prevailed under both parties between the 30s and the 70s.

Here are the median household income and real wage data for those presidents whose terms are in the Federal Reserve’s data sets:

You might notice that in the Reagan and Clinton presidencies, household income grows much faster than wages. This is largely because of the entry of women into the workforce. In the late 90s, female labor force participation plateaus. This would make it much harder for administrations to sustainably grow the economy without growing either wages or household debt. The Bush administration infamously relied heavily on household debt. In the aftermath of the crash, Obama was left dependent on wage growth, and he was unable to deliver enough of it to reproduce historical growth figures in the 3-5% target range. The presidents prior to Carter are not in the Federal Reserve data set for wages or household incomes, but independent estimates for those periods often show much higher rates of wage growth, fuelling higher growth numbers than we’ve seen in more recent decades.

None of these figures make Obama look exceptional. But while Obama compares poorly with past presidents, he compares well with his contemporaries. The other rich, powerful western democracies are beset by their own problems and have been unable to keep up with Obama on growth: 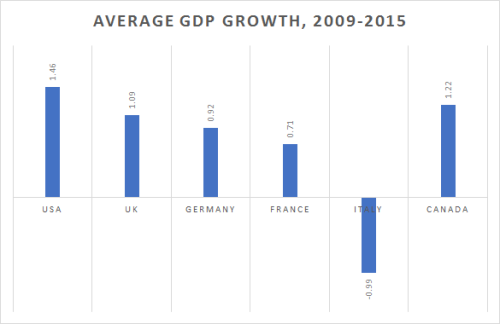 Poor Italy. Yet while Obama has beaten out this sorry set on growth, he’s proven the least capable of restraining top 1% income share:

While Obama beat these countries on growth, he allowed very large percentages of the growth he generated to flow directly into the pockets of wealthiest people in society. The US already had the highest top 1% share among these countries in 2009, and under Obama this only got worse.

The upshot of these economic indicators is that the west as a whole is going through a particularly difficult period–Obama was not put in an easy situation, and given his situation, he has not been terrible. But he has also been unable to overcome these conditions or find a way out of them. The long-term bad trends have not been decisively turned back or even halted. This is not all his fault. He did face significant resistance in congress, and many of the things he wanted to do were never tried, so we will never know whether they would have improved things had they been passed. In other countries, the executive and legislative branches are fused, making policy outcomes more decisively attributable to the head of government. Because the United States divides power, it also divides responsibility, making it harder to assign blame or credit to specific administrations and congresses.

We do however know that Obama passed the Affordable Care Act. What difference did it make? Here’s the change in the percentage of Americans without health insurance under each president beginning with Lyndon Johnson, the creator of Medicare and Medicaid:

Johnson is even better than he looks–the Johnson programs were still rolling out into the Nixon years, and many other presidents (including Obama) have expanded the programs Johnson created and piggybacked off his triumphs. Nevertheless, Obama is clearly the next best in this category.

What about poverty more broadly? Here’s the change in the poverty rate for each president beginning with Kennedy:

Poverty tends to fall when economic growth increases. While Obama and Bush produced similar growth rates, Obama has been much better than Bush for poverty (though Nixon still beats both). Of course, Bush is smarting because some of the increase in poverty under Bush had its roots in the Clinton hangover and in Clinton’s decision to limit the number of years people can draw upon the welfare system. And once again, it should not go unnoticed that the undisputed king of growing the economy rapidly while fighting poverty and inequality is Johnson–a massively underrated president. After Johnson, the poverty rate never again came within 2/3rds of its 1963 level. Johnson made big differences and those differences have lasted generations despite decades of neglect by later presidents.

Was the first black president good for African-Americans? We can get some idea by measuring the change in the ratio between black and white median income. The higher the value, the less racial inequality we’re seeing. Sadly, when we run the numbers, we discover that America has become more racially stratified under Obama, not less:

Indeed, when we add Bush and Obama together, we find that all reductions to racial inequality made since 1992 have been effectively wiped out. From an economic standpoint, America is no less racially unequal than it was on the day I was born.

Maybe the story is different for gender? Here’s the change in the share of women’s weekly earnings as a percentage of men’s over the course of each president’s term beginning with Reagan:

It does get harder and harder to further increase the female ratio of income as the gap shrinks. Nevertheless, Obama is no prize. Clinton is bizarrely disastrous–the 90s were not a great decade for women. The leader here is the first Bush–he made the greatest impact in half as much time as the others. What I find most interesting is that these identity issues do not seem to obviously go together. Clinton was the best of the last three presidents for African-Americans but the worst for women, while Bush was the best of the last three for women but the worst for blacks.

What about crime? We can take a look at how different presidents have handled the murder rate.

Obama didn’t make much difference here. Some of this may be due to a hard floor–the murder rate has been very reluctant to go far below the level it reached in the early 00s. Despite running as the law and order candidate, Nixon was the worst recent president for murder. Clinton was the best, though it’s hard to say how much of this was due to any specific policy of his–large decreases in the murder rate happened in many rich democracies during the same period.

People are fond of blaming the incumbent US president for every problem in the world, but much in the world is beyond the power of the United States to control, and it would be unfair to hold US presidents fully responsible for other countries’ policies (interventions notwithstanding). I will however offer a broad measure of US power, based on the ratio of the leading US rival’s military spending to America’s at the end of each president’s term, starting with Reagan’s. Especially large figures are indicative of a higher level of threat to US dominance, while especially small figures are indicative of excessive and unnecessary military spending: 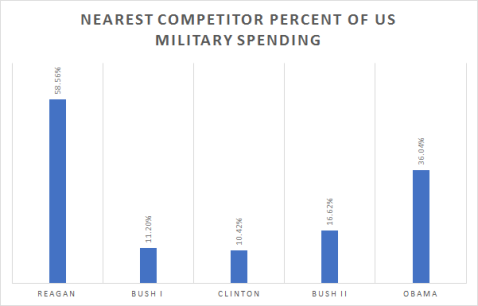 The figure is elevated in 1988, prior to the Soviet collapse. Shortly thereafter China replaces Russia as the nearest competitor. Under Obama, China has been permitted to catch up some, albeit not yet to the late Soviet level. If you think China is a growing imminent threat, this might concern you. If you think we spent far too much relative to other countries in the 90s and 00s, you might be pleased. You might even be both concerned and pleased at once.

On the whole, I don’t find these numbers especially impressive or especially appalling. There are no categories where Obama is the indisputable leader or laggard. At a time when it seems everyone is out to prove what an amazing or horrifying president he was, I am struck by just how “meh” his figures are. There are really three credible interpretations here:

Your view turns less on Obama’s performance and more on how you think things have been going historically–is American civilization rising, declining, or treading steady? Whichever one it is, Obama didn’t change it.