Don’t Hate Trump Voters–Hate the System that Creates Them

I’ve been disappointed in my side over the last 48 hours. On social media aggressive posts are circulating personally blaming and shaming Trump supporters for Trump’s victory and for criminal acts motivated by hate. Columnists are lashing out, reductively attributing Trump’s victory to racism and sexism alone on the basis of exit polls which show the same kinds of gaps in support among the races and the sexes that we’ve long seen in previous races dating all the way back to the 70s and beyond. The last time women were more likely to vote for a Republican was 1960 (when they skewed slightly toward Nixon) and black voters haven’t gone for a Republican since before the New Deal. Too many people are doubling down on the same failed strategy that brought us to this pass. But just as importantly, by blaming the voters as individual agents, these people are contradicting fundamental left wing principles. 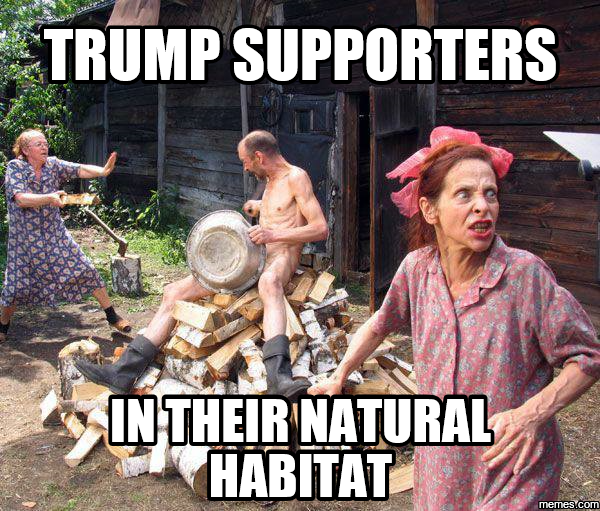 I have long argued that the core difference between the left and the right is that the left thinks of society as a system while the right thinks of society as composed of autonomous, independent units. In left wing social theory, people are constructed by social institutions. This means that our values and our self-concepts are socially acquired. This kind of view necessarily attributes a great deal of responsibility to our state institutions and policies–on a left wing view, the state is not just something that you interact with, it’s something that shapes who you are from a very early age. Even when the state chooses to stay out of things and deregulate, it’s making a substantive policy decision that will change the way its people understand themselves and each other. Even when things aren’t planned, it’s a form of planning. So for the left the question is not “should the state do things or not do them?”, it’s “what should the state do and how can we best do it?”. Many left wingers are relatively liberal and embrace spaces where government doesn’t regulate, but they do it not out of respect for autonomy but because this achieves something they consider socially valuable. The left believes everything is connected and no man is an island. Societies produce people, so when people behave poorly this reflects on society and necessarily implies that there are policies or institutions that are not functioning as well as they could.

The right thinks that individuals are autonomous and can act independently of the social institutions that structure their lives. They view the relationship between the individual and the state as more transactional, and they strongly object to arguments which blame social institutions and policies for people’s behavior on the grounds that this diminishes their personal responsibility. For the left, poverty and crime are deeply troubling because of what they say about the kind of people our institutions are producing. For the right, poverty and crime reflect personal character flaws and little else. The left uses welfare and education policies to target poverty and crime as social problems to be solved collectively. The right objects, claiming that they are being made to subsidize the personal failings of other people. Just as the right accuses the left of undermining personal responsibility, the left accuses the right of undermining collective responsibility.

The two positions sharply contradict, but many on both the left and right frequently indulge in lazy arguments which implicitly contradict their own central theses. Some right wingers will tell you that people are personally responsible for their own character but then tell you that we need to teach character or religious values in our schools–this necessarily implies that character has to be developed socially, and implies the left’s thesis. By the same token, left wingers who are personally blaming Trump voters, either individually or as a group, are making the same kind of contradictory argument. Rather than view Trump’s victory as evidence of problems with our institutions and policies, they are pinning it on racism and sexism and treating these things as character failings. This is why “call-outs” are fundamentally reactionary.

There are two ways to think like a lefty about Trump’s victory, and we ought to be exploring both:

The first requires an assumption about the value of democracy. If you think democracy is the right way to make political decisions, then you can never view the voters as the problem. When a campaign fails, it must always be because of problems with the message, the messenger, the delivery, or the context. This directs the criticism at the Democratic Party and the Clinton campaign, asking what they did wrong. There are many possible answers–perhaps the Democratic Party platform isn’t appealing, perhaps it was sold in an unappealing way, perhaps Clinton was not the right person to sell it, or perhaps the Democrats are viewed as responsible for socioeconomic conditions that made the public hostile to them. Perhaps all of these things are true, to varying degrees. Perhaps we need to make interventions earlier on in the educational process to teach people to engage with politics in a way that immunizes them against Trumpian messages.

The second drops the assumption about the value of our democracy as currently constructed. It might be the case that our institutions are just not able to develop a voting public that can reliably reject the kind of message Trump offers, regardless of how effectively we campaign. It might be the case that reforming institutions to enable them to produce better voters is too difficult or would take too much time. It might be the case that even if we could reform them, this would cost us too much in other areas–instead of studying politics, many people raise families or develop other skills and talents that are just as valuable, and the loss of those skills and talents would be regrettable. If we can’t shape voters in a way that immunizes them against a Trumpian message, then we would need to revise our political institutions to create new checks and balances that preserve some role for political expertise in government. The important thing is that while this view is centered around problems with how our society develops its voting population, it never engages in any blaming. It always looks at the voters as products of our institutions.

These two views can fit together to a degree–maybe we campaigned less effectively than we could have and maybe the Democratic Party should have better policies, but maybe we need to campaign too perfectly and struggle to get the kind of Democratic Party we need because voters don’t have the necessary expertise to recognize the likely consequences of Trumpian policies in too many cases. But ultimately we have to decide whether we think our democratic institutions are good enough. Because if they’re not good enough, they’re going to produce bad governments which will produce bad policies which will produce worse voting populations, and so on in a democratic death spiral.

This is an important debate which we can and should have. But it has to be done from a left wing point of view–it needs to be about institutions and policies, not about shaming voters, either individually or as blocs. There’s an argument to be made that the Clinton campaign failed in no small part because it adopted a right wing attitude toward voters who were unwilling to support it. Too many Clinton supporters believed that Trump supporters were not just mistaken, but deficient in virtue due to character flaws for which they were responsible. There was nothing left wing about this. It showed no empathy and no willingness to consider the structural factors that create Trump voters. It wasn’t just wrong, or just cruel–it was conservative.