The Limitations of Proportional Representation

About 23% of Americans don’t like both Trump and Clinton. Many of these people are considering third parties, or would like to be considering them but don’t feel they can safely do so because of the American voting system, which makes it very difficult for third parties to win and ensures that people who vote third party get no say in the choice between the two major party nominees. Some people have talked about wanting to switch to proportional representation (PR) to break the stranglehold of the two parties on politics. Under PR, if 8% of the population votes for a Green or a Libertarian, 8% of the legislature is comprised of Greens or Libertarians. If no party is able to put together a majority of votes, parties have to cooperate in coalitions to get things done. PR is in Jill Stein’s platform and some libertarians have expressed enthusiasm for it as well. PR cannot really be applied to the presidential race, because the president can only be one person–he or she cannot be 8% Green. But for presidential races we could employ a ranked ballot system allowing for an instant-runoff. On this system if you voted for Jill Stein your vote could be transferred to Clinton after Stein is eliminated. This may sound intriguing, but PR is not a magic bullet and it can produce some very bad situations that we should consider.

I want to take you back to 1968. Remember that election? It was really crazy. First Eugene McCarthy decided to primary challenge President Johnson over the Vietnam War. Then Robert Kennedy abandoned Johnson and entered the race too. Even though he was ahead in the primaries (he won New Hampshire 49% to McCarthy’s 42%), Johnson freaked out over this abandonment and withdrew from the race:

Hubert Humphrey, Johnson’s vice president, decided to enter in his place. Then Robert Kennedy was assassinated:

The Democratic Convention was a mess. Humphrey was a Johnson loyalist, supporting the president on civil rights and the war on poverty, but also on Vietnam. Kennedy had opposed the war, but many of his supporters declined to support McCarthy, instead backing late entrant (and the eventual 1972 nominee) George McGovern. This left the anti-war faction too divided to effectively oppose Humphrey. Humphrey’s nomination sparked anti-war riots and many Democrats would support him only reluctantly:

But while the liberals in the party fought over the war, there was one Democrat who felt his party had abandoned him, and he wasn’t going to take it any more. That man was George Wallace. Wallace was governor of Alabama, and he famously stood in the door of a school to prevent black kids from entering it: 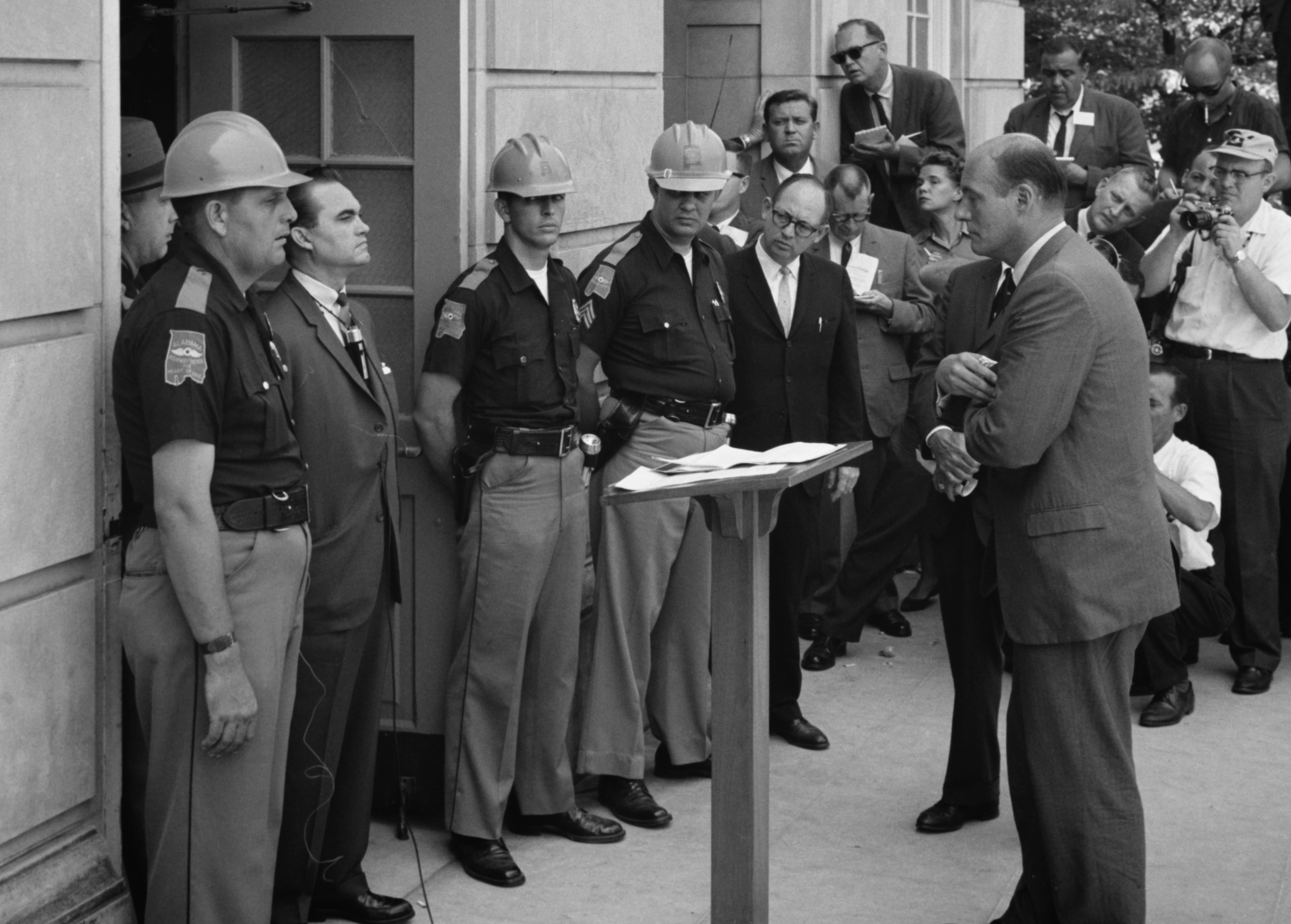 Wallace believed that Johnson and Humphrey were traitors to the south and its values and he decided to mount a third party campaign as the nominee of the “American Independent Party”. This party still exists to this day, and many people in California wishing to register as independents accidentally affiliate themselves with it.

While all this was going on, Richard Nixon was dispatching many famous Republican challengers, including George Romney (Mitt’s Dad), Ronald Reagan, and Nelson Rockefeller (Hillary Clinton backed Rockefeller that year–his defeat caused her to leave the Republican Party). Yes, Nixon was back:

Wallace hoped to win enough electoral votes to stop both Humphrey and Nixon from reaching 270. He thought he could throw the election to the House of Representatives, where southern legislators could extract concessions in exchange for votes. But our political system stopped Wallace–he only won a few states, and our electoral system allowed Nixon to win outright with only 43.4% of the vote:

What happens with PR and ranked vote? To start, the American Independent Party could have contested congressional elections and won seats for itself there. Many more voters could have supported Wallace, and it’s much more likely that Wallace and his supporters would have succeeded in holding the balance of power. Wallace won over 13% of the vote nationally without PR, finished under 5% in 8 states, and exceeded 30% in 8 as well.

Even with just 13% of the vote, Wallace would have held the balance of power under PR. On a ranked ballot system his voters would determine the outcome, and in congress they would be in a tremendously good negotiating position. This means one of two things would probably have happened:

Now, it might be suggested that with PR 1968 would have played out differently–McCarthy could have run third party and turned it into a 4-way race. But McCarthy probably wouldn’t have taken many Nixon or Wallace votes. Humphrey and McCarthy would happily have worked together, but they still probably would not have had 50%, leaving Wallace sitting between a Humphrey/McCarthy coalition and Nixon. No matter how you slice it, PR would have empowered a small extreme minority to hold the rest of the country hostage over segregation.

Those inclined to support Nader, Stein, or an imaginary third party Sanders run don’t generally think of themselves as the heirs to George Wallace. They tend to assume that PR would help left wing challengers more effectively challenge the Democrats. But this cuts both ways. As it stands neither Clinton nor Trump is polling at 50%, and Stein is not taking most of what’s left–it’s going to Gary Johnson. And Gary Johnson is not altogether that different from Wallace. His hard right platform may not include segregation, but it includes many horrible things Wallace never would have done. Wallace wanted to increase Social Security benefits by 60%, but Johnson wants to gut entitlements. He said:

The [Social Security] retirement age needs to be raised. A portion of Social Security ought to be privatized, if not all. And there probably needs to be some means testing. It’s a Ponzi scheme that’s not sustainable.

And even more bluntly:

I would have the federal government cut Medicare and Medicaid by 43% and block grant the programs [to the states] with no strings.

Johnson is an oaf who doesn’t know what Aleppo is, can’t name any foreign leaders, and thinks we don’t need to worry about climate change because “in billions of years, the sun is going to actually grow and encompass the earth”:

Realistically, we have at least as much reason to believe that our electoral system is protecting us from Gary Johnson as we have to believe it’s impeding the Greens or other left wing movements. The blueprint for the left’s resurgence in American politics is probably Corbynism–taking over the Democratic Party from within, as Sanders has tried to do and plans to continue to try to do in down ballot races through his campaign’s “Brand New Congress” strategy. The British Labour Party establishment attempted to resist Corbyn with every bit as much ferocity as the Democratic establishment has resisted Sanders (including excluding a significant percentage of its own supporters from participating in its leadership contest), but it failed, and the Democratic establishment can fail too, and is likely to do so sometime in the not so distant future if Clinton does not win or fails to improve economic conditions for the young, the poor, and the otherwise vulnerable.