The Strategy Behind the Nomination of Merrick Garland

President Obama decided to nominate Merrick Garland to the Supreme Court. Democrats and republicans are trying to turn his nomination into an argument about procedural principles that neither side is really committed to in the abstract–there have of course been previous occasions when some of the same democrats who today scold republicans for not “doing their jobs” tried to argue that nominations shouldn’t be made in election years, and there have of course been previous occasions when some of the same republicans who today scold democrats for trying to deny the people a say in the nominating process tried to argue that congress has a duty to consider the president’s nominee. We’re not fooling each other, so let’s stop fooling ourselves–we appeal to whichever procedural principles happen to advance our ideological objectives. Crying hypocrisy about procedure misses the point–both sides are consistent about which objectives they consider good, and they use whatever political means available to them to achieve those objectives. So instead of hiding behind procedure, let’s instead talk about the Garland nomination through an explicitly ideological lens.

President Obama had two conflicting goals to balance against each other when choosing his nominee:

You can see how these two imperatives conflict–if Obama chose someone too moderate in an attempt to put the maximum pressure on senate republicans, he loses the democratic base and may end up appointing someone who is ideologically unreliable. If he chose someone too radical, a radical judge would be unlikely to be confirmed and would reduce the amount of damage Obama could potentially inflict on republicans by portraying them as obstructionist.

So where does Merrick Garland fit in? Most claims that Garland is quite liberal rest on a piece of political science research by Epstein and Martin. They point out that recent judges’ ideological commitments tend to reflect the ideological commitments of the presidents who nominate them, and on that basis they allege that Garland would be similar to other Clinton/Obama appointees. But this is misleading, because it assumes that no matter who Obama nominated the expected ideological tilt would be largely the same. This begs the question. It misses exceptions, like David Souter, a Bush appointee who went on to join the court’s liberal wing. It also excludes context–Obama has specific reasons to pick someone more moderate this time than he had when he picked Kagan or Sotomayor. We need to know if Garland is an exception to the general rules Epstein and Martin have observed, and we can’t answer that question by appealing to those same general rules.

When we look at Garland as an individual rather than as an example of a typical Clinton/Obama appointee, he looks pretty moderate:

From a liberal standpoint, Garland is a big improvement over Scalia, but we have little reason to think he’d look like some kind of Warren court loose constructionist or Dworkinian legal interpretivist, especially against a right wing administration. Nevertheless, because Scalia was so far right, Garland’s confirmation would move the court to the left considerably. He would likely become the median justice (and most common swing vote) in place of Kennedy. But this is probably not the same thing as making the median justice Kagan or Sotomayor (which is what the left really would have liked to see).

So if you’re the republicans, how do you respond to this? The republicans also have two conflicting interests to juggle:

Indeed, history shows that when there’s gridlock between Obama and congressional republicans, the nation as a whole tends to blame the GOP:

This poll was taken in 2015 and also includes previous polling from 2013 in the column on the far right. This indicates that the public’s tendency to punish the republicans for gridlock has held fast over time.

Nevertheless, most republicans so far seem intent on carrying through the strategy of waiting until after the election, refusing to meet with Garland. This is a mistake. It damages their chances in 2016 and will give Obama a chance to rescind the Garland nomination in the event of a democratic victory in the presidential race. If the republicans continue making this mistake, Obama should capitalize by preparing to rescind Garland’s nomination if he is not confirmed before November, replacing him with a more radical nominee.

In the meantime, republicans would be wise to listen to the sitting senators who have defected and shown willingness to meet with Garland, all of whom either voted to confirm him before or were not in the senate at the time. There are also several additional senators who haven’t broken ranks yet, but have a history of supporting Garland: 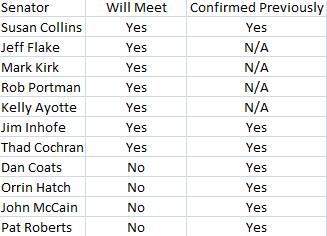 Regular readers will remember Collins, Kirk, and Ayotte–these were three of the target swings I listed last month. If Obama were to get Garland through committee, he needs only 4 swing senators to get 50 votes for Garland (assuming that the republicans do not filibuster a Supreme Court nominee, which is technically possible but not standard practice).

It is in the Republican Party’s interest to confirm Garland now. They are unlikely to win the presidential election in 2016 and if they do win their nominee can only be Donald Trump. If they continue to hold off, they damage their chances of winning in 2016 and they give Obama an opportunity to replace Garland with someone more liberal. Obstruction damages their own cause. So why might they continue to obstruct? There are two possible reasons: