Relax: Turkey and Russia Will Not Go to War

Turkey has shot down a Russian jet that strayed into its airspace. The Turks claim they issued 10 warnings, while the Russians claim they never heard one of them. Over the last few days, many people have speculated on social media that this may lead to World War III. This needlessly stirs up fear–Russia and Turkey will not go to war over something like this. Instead both countries will say bellicose things to stir up support at home while trying to deescalate the situation with relatively muted, token responses. Those claiming otherwise are drastically overestimating Russia’s power and consequently its aggressiveness.

People have been overestimating the Russian threat since the Cold War days. The truth is that the Soviet Union was never very close to the USA or NATO in wealth and power. At its relative peak in the early 1970’s, the USSR’s economy was still getting Pac-Manned by the USA even without help from the other NATO members:

Contemporary Russia is a shadow of its former self:

Correspondingly, its military spending is not what it used to be:

Now, individually, Turkey is much weaker than Russia, both economically:

But Turkey is part of NATO, and that means that if Russia attacks one NATO member state, it is very likely it will have to fight all NATO member states, including the USA and two other countries that also possess their own nuclear arsenals (UK and France). This is the same situation the much more powerful USSR found itself in during the 50’s, 60’s, 70’s, and 80’s. Greece and Turkey both joined NATO in 1952, and the powerful Soviet Union never touched them:

The Soviet Union never invaded a NATO member state because it knew that in a conventional war against NATO it was certain to lose (and in a nuclear war, everyone loses). The USA alone had the military power to defeat the USSR in a straight-up conventional war, and with the help of its NATO allies, the Soviets stood no chance.

This was true at the peak of Soviet power. Today Russia is a rump state, petrol-dependent and a shadow of its former self. It can only contemplate invading countries when it is confident that it will face no resistance from NATO. When Russia picked on Ukraine in 2014 and Georgia in 2008, it did so because these governments were trying to align themselves more closely with the west (Ukraine was about to sign a major economic pact with the EU and was angling to join NATO, while Georgia was trying very hard to get into NATO). Russia knows that once these countries become NATO or EU member states, it will completely lose influence over them. In both cases it invaded in desperate attempts to keep former Soviet satellites in its sphere of influence. In 1988, both Georgia and Ukraine would have been part of the Soviet Union. Today they are dangerously close to becoming part of NATO. Russia attacks out of weakness, not out of strength. It fights to preserve its declining global influence, not to extend it over new places.

This is not to argue that Russia is benign or has good intentions–if it could conquer the world, it probably would. But Russia just doesn’t have the power to do that. Contrary to what many believe, Vladimir Putin is not the second coming of Adolf Hitler. Hitler commanded a first rate military machine and an industrial economy that was strong enough to overcome many powerful countries: 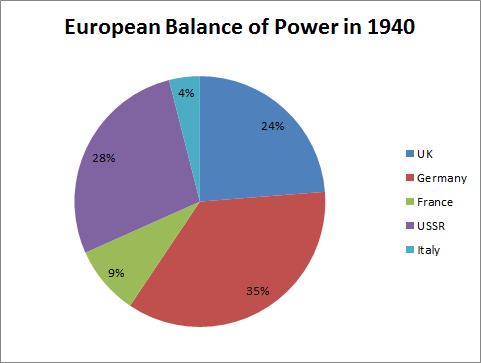 If we look at those same countries today, it’s clear that the Europeans could handle modern Russia even without America’s help–Russia has less than half of the relative economic power that Germany had in 1940: 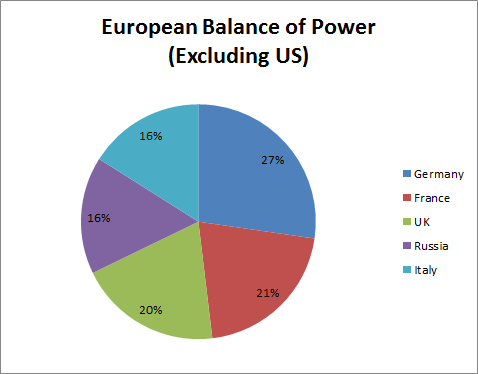 The Europeans may not spend a very large percentage of their economic outputs on the military, but this is because they know they don’t have to–if the European countries were to mobilize for a war, they have the economic potential to rapidly build a much more effective fighting force than Russia can muster even if the United States decided to abandon the region entirely.

Turkey knows that Russia is weak, and it’s annoyed at Russia for supporting Bashar al-Assad’s regime in Syria, which Turkey detests. Turkey knew it could poke Russia and send it a message because Russia’s available responses are few. Turkey’s right wing Justice and Development Party has been in power continuously since 2003. The Turkish economy has slowed down in recent years, failing to achieve the 5% and higher annual growth rates that the government was able to produce earlier in its term:

The Turkish government needs foreign threats to distract the Turkish public from economic issues. To that end, it has stoked hostility toward the Kurds and has manufactured this imaginary crisis with the Russians.

If this sounds familiar, it’s because Turkey’s government has stolen this strategy right out of Vladimir Putin’s playbook. Putin has long used international security issues to buttress government support when the Russian economy takes a spin. When he intervened in Ukraine, his numbers skyrocketed, and he hopes his involvement in Syria will keep Russians focused on foreign policy:

This is important for Putin, because his economy is a shambles due to weak oil prices, also failing to achieve the 5% and higher annual rates that Putin saw earlier in his administration:

Both governments stand to gain from a bellicose verbal exchange and minor tit-for-tat action to keep their respective publics riveted. They have both accused each other of supporting the Islamic State, they have suspended military cooperation, and they both refuse to apologize to each other.

Realistically, the most Russia can do is stop its people from visiting Turkey as tourists and break off trade with the Turks. Trade between Russia and Turkey has an estimated value of $44 billion, which would be enough to seriously damage Turkey’s economy. The trouble is that cutting off trade would damage Russia as well, and while Turkey’s economic growth is not exceptionally strong right now, Russia is in the middle of a painful recession and really cannot afford this. Russia and Turkey also have some major cooperative projects, including a nuclear power plant and an oil pipeline. But again, both countries stand to suffer if these deals are cancelled. The Russians may threaten to cut off trade and cancel these projects, and they may even do so briefly, but once the issue fades in the public’s memory, Russia will have strong economic incentives to quickly and quietly reinstate normal relations. During the Cold War, incidents involving aircraft happened on several occasions, all leading nowhere and resulting in nothing. The public forgets them. We move on.

11 Comments to “Relax: Turkey and Russia Will Not Go to War”